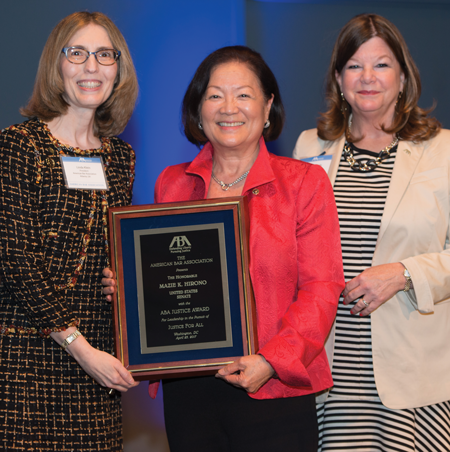 Over 400 bar leaders from all 50 states, the District of Columbia and the U.S. Virgin Islands converged on Capitol Hill for hundreds of face-to-face meetings with members of Congress during the 21st annual ABA Day in Washington, D.C., which was held April 25-27.

ABA Day, coordinated each year by the Governmental Affairs Office, provides an opportunity for ABA members to convey the association’s views on priority issues of importance to the legal profession.

“Our legislative program is based on the relationships you cultivate at ABA Day. We could not do this without your help,” ABA President Linda A. Klein said in her message to participants.

This year, attendees focused their discussions on funding the Legal Services Corp. to assist low-income Americans with civil legal needs and on supporting access to justice for homeless veterans.

The participants delivered more than 19,000 Legal Aid Defender cards to congressional members with messages created by their constituents through a grassroots campaign organized by the Governmental Affairs Office.

Bar leaders also urged their members of Congress to enact the Homeless Veterans Legal Services Act. This would expand access to legal services for displaced veterans and those at risk of homelessness by authorizing the secretary of the Department of Veterans Affairs to partner with public and private entities and help fund a portion of the cost of legal services.

Keynote speakers during the event’s opening session included Sen. Dan Sullivan, R-Alaska; Reps. Susan Brooks, R-Ind., and Brian Fitzpatrick, R-Pa.; and LSC President James J. Sandman, who all recognized the ABA’s efforts to preserve the LSC and expressed their support for the organization’s funding. During the breakfast briefing the next day, James Burnham, special assistant to the president and senior associate counsel in the Office of the White House Counsel, told the group that the administration has made filling judicial vacancies a priority and would soon be sending nominations to the Senate. Sen. Al Franken, D-Minn., thanked the ABA for its LSC support and vowed that Congress would not let LSC funding be eliminated.

This year’s Justice Awards recognized the following members of Congress for their support for issues of critical importance to the ABA and the administration of justice: Sen. Mazie K. Hirono, D-Hawaii, for her commitment to nondiscrimination and her efforts to ensure that unaccompanied minors have access to legal and humanitarian protections; Rep. Joseph P. Kennedy III, D-Mass., for his commitment to equal rights and his advocacy for adequate funding of the LSC; Sen. Richard C. Shelby, R-Ala., for his continued leadership in securing increased LSC funding and in protecting the attorney-client privilege; and Rep. Mac Thornberry, R-Texas, for his leadership in passing the first major reforms in over 30 years to the Uniform Code of Military Justice.

Grassroots Advocacy Awards were presented during the annual Capitol Hill reception at the U.S. Supreme Court. Justice Elena Kagan kicked off the event by thanking the ABA and emphasizing the importance of legal services. Award recipients included Edwin A. Harnden for his efforts to garner lawyer support for the Campaign for Equal Justice and Kids in Need of Defense, which works to increase awareness about the rights of unaccompanied immigrant and refugee children.

Summing up the impact of this year’s event, ABA Day Planning Committee Chair Patricia Lee Refo said, “It was inspiring to see so many bar leaders from around the country participate in the legislative process by letting members of Congress know how important it is to foster access to civil justice. Our input and the time we spent educating policymakers on these issues was invaluable to the success of ABA Day.”

This article appeared in the July 2017 issue of the ABA Journal with the headline "Advocates Assemble: ABA Day draws bar leaders to Capitol Hill to meet with Congress."