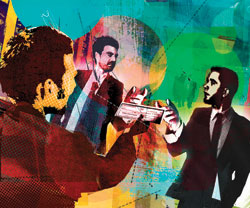 An opinion issued recently by the ABA Standing Committee on Ethics and Professional Responsibility could ignite a debate over the concept of nonlawyer ownership of law firms only months after the association’s House of Delegates sidestepped the issue while considering recommendations of the Commission on Ethics 20/20.

The ABA Model Rules of Professional Conduct—which are the direct basis for professional conduct rules in every state except California—do not permit nonlawyer ownership. And ABA Formal Opinion 464 (PDF), issued Aug. 19, does not deal with the issue of nonlawyer ownership. Rather, the opinion addresses the narrow question of whether the Model Rules permit a lawyer to divide a legal fee with a lawyer in a jurisdiction that would allow the other lawyer to eventually distribute some portion of the fee to a nonlawyer.

“Interfirm division of legal fees is clearly contemplated by the Model Rules,” specifically Rules 1.5 and 5.4, the committee states in its opinion. “A division of a legal fee by a lawyer or law firm in a Model Rules jurisdiction with a lawyer or law firm in another jurisdiction that permits the sharing of legal fees with nonlawyers does not violate Model Rule 5.4(a) simply because a nonlawyer could ultimately receive some portion of the fee under the applicable laws of the other jurisdiction.”

The committee bases its analysis largely on the distinction made by the Model Rules on dividing fees with lawyers and sharing fees with nonlawyers. Rule 1.5(e) authorizes “a division of a fee between lawyers who are not in the same firm” under certain limited circumstances. Meanwhile Rule 5.4(a) states, “A lawyer or law firm shall not share legal fees with a nonlawyer,” except under another set of limited circumstances.

Accordingly, a division of fees between lawyers under Model Rule 1.5 does not trigger the prohibitions in Model Rule 5.4 against fee sharing with nonlawyers, states the opinion. “As explained in Comment [1] to Model Rule 5.4: ‘These limitations are to protect the lawyer’s independence of professional judgment.’ The rule protects a lawyer’s independent professional judgment by limiting the influence of nonlawyers on the client-lawyer relationship.”

But despite its seemingly narrow scope, Opinion 464 has set off alarms among some segments of the legal profession. Their concern is that any step in the direction of giving nonlawyers some form of ownership involvement in law firms threatens the professional independence that is one of the core principles of lawyering.

“The whole idea of Model Rule 5.4 is that a law firm won’t be in-dependent if it’s splitting fees with a firm with nonlawyer owners,” says Lawrence J. Fox, a past chair of the ethics committee and a member of the ABA Commission on the Evaluation of the Model Rules of Professional Conduct, known as Ethics 2000. “In one simple, unsupported opinion, we’ve destroyed a principle we’ve fought so hard to protect,” says Fox, a partner at Drinker Biddle & Reath in Philadelphia.

Another critic of Opinion 464 is John E. Thies, the immediate-past president of the Illinois State Bar Association and the National Caucus of State Bar Associations. “It’s difficult to reconcile the opinion with ABA policy,” says Thies, a shareholder at Webber & Thies in Urbana.

In 2000, for instance, the House of Delegates rejected a proposal to allow multidisciplinary practice at law firms. That policy is known as the MacCrate resolution for Robert MacCrate of New York City, senior counsel with Sullivan & Cromwell. He led the charge against a proposal by the Commission on Multidisciplinary Practice, which had pushed for relaxation of professional conduct rules to allow lawyers and professionals in other disciplines to join together in single businesses. “The sharing of legal fees with nonlawyers and the ownership or control of the practice of law by nonlawyers are inconsistent with the core values of the legal profession,” states the resolution, which passed by a wide majority in the House. “The law governing lawyers that prohibits lawyers from sharing legal fees with nonlawyers and from directly or indirectly trans-ferring to nonlawyers ownership or control over entities practicing law should not be revised.”

Thies and Fox also suggest that the ethics committee may have overstepped its jurisdictional bounds in issuing Opinion 464. “The committee is supposed to interpret the rules, not change them,” Fox says. “It was just an end run.”

On Oct. 18, the ISBA Board of Governors adopted a resolution objecting to ABA Ethics Opinion 464 on grounds that it “creates new policy bypassing the ABA House of Delegates,” is “a violation of existing ABA policy” and is inconsistent with ISBA policy. This is not a new gambit for the ISBA, whose board adopted a similar resolution in 2012 when it was concerned that the Ethics 20/20 Commission was considering the possibility of proposing that the ABA Model Rules be revised to permit some form of limited nonlawyer ownership of law firms.

Despite criticisms, the ethics committee is comfortable with its opinion, says chair Paula J. Frederick. “We took this on to provide helpful guidance to lawyers confronted with this issue,” says Frederick, who is general counsel to the State Bar of Georgia in Atlanta. “The opinion does not make any statement, pro or con, about nonlawyer ownership of law firms. It simply answers the question of whether the Model Rules allow a lawyer practicing in a Model Rules state to divide a legal fee with a lawyer who practices in a firm that shares fees with nonlawyers. The opinion is limited to an interpretation of Rules 1.5 and 5.4, is squarely within the committee’s jurisdiction, and thus is entirely appropriate.”

The core value at stake in Opinion 464 “is whether dividing a fee in this way is likely to compromise the lawyer’s independence of professional judgment,” Frederick says. “If you presume that you are dealing with the typical lawyer—that is, one who tries to be ethical and who is reasonably aware of her obligations under the rules of professional conduct—I see little likelihood that this type of fee sharing by co-counsel would have any impact on the lawyer in the Model Rules state or her client.”

HAVE WE BEEN HERE BEFORE?

Nonlawyer ownership turned out to be one of the toughest issues for the ABA Commission on Ethics 20/20 to deal with, even though it never developed recommendations in that area. By the time the commis-sion completed its work early this year, it had drafted a wide range of proposals to revise the Model Rules of Professional Conduct in response to the growing impact of technology and globalization on the legal profession. The commission’s recommendations, submitted in two separate batches, breezed through the association’s policymaking House of Delegates in August 2012 and again in February.

But in April 2012, at the close of one of the commission’s many drafting meetings, co-chairs Jamie S. Gorelick and Michael Traynor announced that the commission had decided not to develop a proposal on whether nonlawyers should be allowed to have some form of limited ownership interest in U.S. law firms. Gorelick is a partner at Wilmer Cutler Pickering Hale and Dorr in Washington, D.C. Traynor of Berkeley, Calif., is a past president of the American Law Institute.

“Since its creation in 2009, the commission has undertaken a careful study of alternative law practice structures,” said Gorelick and Traynor in their statement. “Based on the commission’s extensive outreach, research, consultation and the response of the profession, there does not appear to be a sufficient basis for recommending a change to ABA policy on nonlawyer ownership of law firms.”

Nevertheless, the commission still had to contend with a resolution co-sponsored by the Illinois State Bar Association and the ABA Senior Lawyers Division that called for the House of Delegates to reaffirm its MDP policy from 2000 and to affirm that the law governing lawyers relating to nonlawyer ownership and fee sharing should not be changed.

After a heated debate, the House voted to postpone the resolution indefinitely, which cleared the way for the Ethics 20/20 Commission to prepare its final recommendations for House consideration in February. But the commission declined to submit a resolution on the fee division issue, instead referring it to the ethics committee. And now that the committee has issued Opinion 464, the merry-go-round of debate over the issue is starting up all over again.

The question is how productive those efforts might be. “Whatever one thinks about the merits of nonlawyer ownership of law firms, the discussion needs to continue in the U.S., especially as we learn more about experiences abroad,” says Andrew Perlman, a law professor at Suffolk University in Boston who served as chief reporter for the Ethics 20/20 Commission. “But I don’t think we’ll see movement on the ABA level. The ABA is reluctant to even discuss the issue at a policy level.”

This article originally appeared in the December 2013 issue of the ABA Journal with this headline: “Second Time Around: An ABA ethics opinion sparks renewed debate over nonlawyer ownership of law firms.”