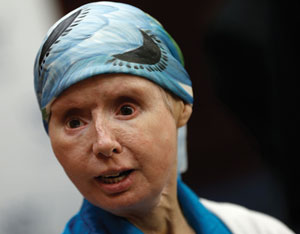 Charla Nash, who underwent a full face transplant after a friend’s pet chimpanzee mauled her, speaks at a 2014 press conference on Capitol Hill. Getty Images

The adage that there's no place like home should not apply to dangerous wild animals, in the view of a growing number of organizations pushing for the adoption of laws or regulations that would impose strict limits on the private possession of a menagerie of creatures, including lions and tigers and bears, wolves, leopards, nonhuman primates, and many types of reptiles.

In February, the ABA became a proponent of such limits when the policymaking House of Delegates adopted a resolution urging legislatures and regulatory agencies from the federal government on down “to enact comprehensive laws that prohibit the private possession, sale, breeding, import or transfer of dangerous wild animals, such as big cats, bears, wolves, primates and dangerous reptiles, in order to protect public safety and health, and to ensure the humane treatment and welfare of such animals.”

A report supporting the resolution indicates that institutions such as accredited zoos and animal sanctuaries would be exempted from such measures, and that most current owners of dangerous wild animals would be covered by grandfather provisions, subject to appropriate regulations and inspections.

The resolution was sponsored by the Tort Trial and Insurance Practice Section and drafted by the section’s Animal Law Committee.

“We’re advocating for a more uniform approach on how these are dealt with,” says Michael W. Drumke, a partner at Swanson, Martin & Bell in Chicago, whose term as chair of TIPS ended Aug. 31. “There are people who are simply not trained and not experienced and don’t have the resources or background to handle these animals,” he says, which can pose a threat to themselves, other people and the animals themselves.

In passing the measure, the ABA joins such entities as the Humane Society of the United States, the American Veterinary Medical Association, the Association of Zoos and Aquariums, and the U.S. Department of Agriculture, which all have called for prohibitions on the private possession of certain species of dangerous—sometimes referred to as exotic—wild animals.

A primary concern of groups supporting such prohibitions is that dangerous wild animals should not be pets because they behave unpredictably and cannot be easily domesticated. “Lions, tigers, leopards, bears, wolves, reptiles and nonhuman primates belong in their natural habitats or at accredited facilities that have the appropriate knowledge and expertise to care for wild animals humanely and securely—not in the hands of unregulated individuals,” the TIPS report states.

Advocacy groups maintain that the private ownership of dangerous wild animals is not an isolated concern. Some estimates put the number of privately owned tigers in captivity, for instance, at 5,000—more than are living in the wild.

The TIPS report cites estimates that more than 1,200 incidents involving captive big cats, bears, primates and large constrictor snakes have occurred nationwide since 1990, resulting in more than 40 human deaths and hundreds of injuries. One particularly grisly case involved Charla Nash, a Connecticut woman who suffered extensive injuries, including the loss of her face and hands, when her friend’s pet chimpanzee, named Travis, attacked her one day in February 2009. Nash became one of the first patients to receive experimental facial replacement surgery, and she is now an advocate for legislation to limit private ownership of nonhuman primates.

But private ownership of dangerous wild animals poses other concerns as well, according to proponents of limiting the practice. Various species can carry dangerous and sometimes fatal diseases, such as rabies, herpes B virus, salmonella, tuberculosis and even polio. And the animals themselves often suffer from inadequate care and even abandonment.

So far, any efforts to regulate private ownership of dangerous wild animals have been undertaken by the states. The ABA’s resolution “sends an important message that there is a real need for a consistent statewide framework,” says Nicole Paquette, vice president for wildlife protection at the Humane Society.

At the federal level, no law directly addresses private possession of dangerous wild animals, although there are regulations that apply to buying or selling certain live exotic animals across state lines or the U.S. border. And Congress has considered, but not passed, the Big Cats and Public Safety Protection Act, which would prohibit future private possession and breeding of lions, tigers and other big cats nationwide.

But some states that regulate ownership by permit do not require any special training or relevant qualifications, nor is any proof of financial ability to meet the needs of the animals, or liability insurance, required. In some states, only a cage or a pen—often inadequate and sometimes inhumane for wild animals—is necessary to house them, according to the TIPS report.

Individuals face few obstacles in purchasing dangerous wild animals and keeping them as pets, the report states, and animal owners are free to forum-shop for states without regulations or with minimal enforcement regimes. Numerous unregulated auctions and even more online purchase sites make it easy to obtain the animals.

Owners who exhibit their exotic animals to the public or conduct performances featuring them must obtain a license under the federal Animal Welfare Act. But that license exempts many owners and breeders from provisions of state laws on possession of such animals, Paquette says, which often means that “some of the owners get away with shabby, inhumane roadside attractions.”

Last year the Humane Society oversaw undercover investigations at two such licensed facilities, Tiger Safari in Tuttle, Oklahoma, and Natural Bridge Zoo in Natural Bridge, Virginia, which resulted in a U.S. Department of Agriculture report citing numerous violations of the Animal Welfare Act. The report found that the facilities failed to provide adequate shelter, failed to separate incompatible animals, and failed to provide proper diets and drinking water. Even worse, Paquette says, tiger cubs were separated from their mothers and handled by the public at just 3 and 4 weeks old and were also dragged, choked, punched and slapped.

A particularly harrowing incident involving private ownership of dangerous wild animals occurred in 2011 when Terry Thompson of Zanesville, Ohio, freed some 50 animals shortly before taking his own life. Fearing that the released animals would cause widespread injury or death to those in their path, officers killed 49 of them; among the animals killed were rare Bengal tigers, lions, black bears, grizzlies, mountain lions, wolves and a baboon.

That incident led to Ohio passing a comprehensive bill against ownership of dangerous wild animals, which was quickly challenged as a violation of the property and constitutional rights of exotic animal owners. In 2012, the U.S. District Court for the Southern District of Ohio in Wilkins v. Daniels upheld the law, noting that “animals subject to the act are dangerous and the act is necessary to protect the general public.”

Many owners of dangerous wild animals and their advocacy groups still maintain there should be no such laws. The U.S. Herpetoculture Alliance, which advocates for those who keep live reptiles and amphibians in captivity, says the ABA’s “broad and over-inclusive” resolution “will be a persuasive argument to politicians,” while presenting new problems for all exotic animal owners and keepers.

Robert M. Owens, an attorney in Delaware, Ohio, who represented the parties challenging the state law, says his clients had been animal lovers for more than 20 years and had never had any problems or incidents involving their pets. Now, he says, his clients have been told that animals are, in essence, property, like cars, “and they decided cars are dangerous and all of a sudden they are going to come and shoot your car and take it.” While some animal owners have told him they will stand their ground, Owens says the law and its strict provisions have had a serious impact on them. “Some say they feel like their families are falling apart.”

This article originally appeared in the November 2015 issue of the ABA Journal with this headline: “Out with the Wild: Association joins the call for stricter laws regulating private possession of dangerous animals.”