ABA makes the Model Rules available as a mobile app 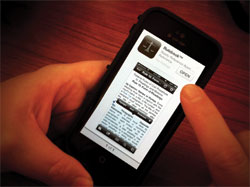 As a self-described “ethics nerd,” Lucian T. Pera likes the idea of having easy access to a variety of reference materials on his mobile devices when he’s away from the office. “I use this stuff,” he says.

So he was an early purchaser when the ABA Center for Professional Responsibility recently introduced its first app—the popular term for a software application, or program, that is designed to run on smartphones, tablet computers and other mobile devices. CPR’s app makes it possible for lawyers to download the ABA Model Rules of Professional Conduct to their mobile devices. (Every state except California has adopted the format used by the Model Rules.)

“I’ve got it right here on my iPhone,” says Pera, a partner at Adams and Reese in Memphis, Tenn., who serves as ABA treasurer. “It’s a nice, clean little app.” For CPR, which has a wealth of information on ethics and related topics available for digital sharing, “it’s a toe in the water,” he says.

But the Model Rules app is targeted toward a wider range of lawyers than those who take a specialized interest in ethics. The typical practitioner, says Pera, should have ready access to local rules of professional conduct, the Model Rules, ethics opinions and possibly a treatise or two. The benefit of apps, he says, is that those materials are accessible wherever the lawyer goes. “Then when something comes up,” he says, “you pull it up and you’ve got what you need.”

The key is mobility, along with recognition of how more lawyers are incorporating technology into their practices, says Arthur H. Garwin, the director of the Center for Professional Responsibility. “The whole point was to put the Model Rules on your mobile device,” he says. “I don’t even use a computer away from my office anymore. That’s a trend.”

MORE THAN AN E-READER

The Model Rules app is not available directly from the ABA. Rather, it is being sold for $24.99 under a three-year license agreement with Ready Reference Apps, a company based in Salt Lake City. For now, at least, the app is available only from the Apple iStore as part of the company’s Rulebook app, which is available at no charge. (Once that app is downloaded, the Model Rules app can be located by opening the Rulebook library manager and then navigating to “other federal authorities.”)

“Starting with iOS [Apple] devices was a no-brainer,” says Gregory Hoole, who heads up Ready Reference Apps. “Apple dominates the tablet market and is the single biggest player in the smartphone market. This is beginning to change, however, and we plan to launch at least an Android version, and possibly a Windows 8 version, of the app in 2014.”

Hoole says the interactive nature of the Rulebook app, including the Model Rules, is crucial for practicing lawyers. “The app is not just an e-reader,” he says. “E-readers work great for novels and other cover-to-cover books, but you need an app like Rulebook to navigate easily and efficiently through a reference book.”

The Model Rules app is part of a growing effort by the ABA to find more effective ways to share content and interact with members and the general public, says Robert Rupp, the association’s associate executive director for business services.

“The CPR project is a great example of using apps as an extension of our historically successful licensing program,” Rupp says. “In this case, we were able to put this valuable content onto an already popular app and realize revenue through a licensing arrangement with the app developer rather than addressing the challenges of developing, marketing, distributing and supporting our own app.”

For the ABA, “mobile distribution of content is a top priority,” says Rupp. “If we expect our content to be valuable to lawyers and the public, then it must be available in the way so many users are consuming content today—and that is through apps, e-books and mobile-optimized websites.”

This article originally appeared in the December 2013 issue of the ABA Journal with this headline: “Going App Over the Model Rules: ABA Center for Professional Responsibility makes materials available on mobile devices.”