Retired Gen. Earl Anderson, an ABA Medal recipient, has served his country and the ABA 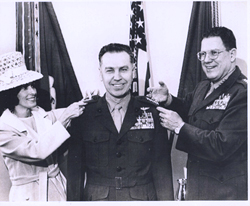 Earl E. Anderson already was 69 years old in 1988 when he became active in the ABA's leadership. But over the next quarter-century, Anderson—who has been an ABA member for more than 60 years—has played significant roles in creating a new division for government lawyers, helping guide the association's efforts on national security issues, serving on the Board of Governors and in the House of Delegates, working on task forces, and launching a project to provide pro bono legal assistance to military personnel. But those are just the highlights.

It's not that Anderson, now 95 and still active in the ABA, is a late bloomer; it's just that he was busy with other things during the first few decades after he joined the ABA as a 1L at the George Washington University Law School in 1950, when he was a 30-year-old major in the U.S. Marine Corps. He had flown bombers in World War II, and a few years later, he was selected with a handful of other officers to go to law school.

So he transitioned from bombers to helicopters, which had become more strategically important in the Korean War and thus offered upward mobility in the career sense. He would fly helicopters in Vietnam, too. Ultimately, he became the Marine Corps' assistant commandant, its second-highest officer.

Anderson's unusually lengthy and varied list of accomplishments was highlighted in August when he received the ABA Medal, the association's highest honor, during the General Assembly at the 2014 annual meeting in Boston.

In 1945, Anderson leads a squadron on a bombing mission in the Southwest Pacific. Photo courtesy of David Anderson, CIV, USAFF.

Anderson, who lives in Vienna, Virginia, near Washington, D.C., took the podium in the Veterans Memorial Auditorium at the Hynes Convention Center using a cane, though otherwise standing firm. In trademark fashion, he went into detail about a few individuals with whom he had served in war—men who sacrificed their lives to preserve freedom and justice.

Anderson was introduced by past ABA President Robert J. Grey Jr., a partner at Hunton & Williams in Richmond, Virginia. The two men had bonded in the late 1990s, as Grey began his own ascent in the ABA leadership, and they worked together in the Virginia delegation to the House of Delegates. Their close ties continued when Grey was president in 2004-05 and Anderson was a member of the Board of Governors. 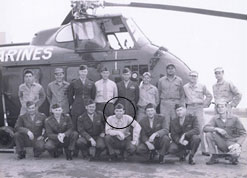 Grey says that Anderson's emphasis on others in his speech was typical: "When accomplishing great things in the ABA in various causes, he never looked for credit, never promoted himself. So a lot of people didn't know how much he was getting done. He cared more about what was happening for others."

Anderson expresses pride and does take credit for his leading role in creating the ABA's Government and Public Sector Lawyers Division in 1991, which he would chair in 1994-95. "We needed a forum for them to participate," he says. "They were one-eighth of all the lawyers in the U.S."

That effort grew out of Anderson's first venture into significant ABA work.

Following his retirement in 1975 after 35 years in the Marines, Anderson became head of the Office of U.S. Foreign Disaster Assistance. In 1977, he was named head of the office of the U.N. disaster coordinator, a position he held for five years. Then in 1988, when he had more time on his hands, his friend John R. DeBarr, who was incoming chair of what is now the Solo, Small Firm and General Practice Division, asked Anderson to speak on his behalf at the annual meeting in Toronto. DeBarr, a retired Marine brigadier general, had been the staff judge advocate to the commandant, the Corps' highest-ranking lawyer.

The division soon had a new committee concerned with government lawyers, and Anderson was its first chair. Later, the new Government and Public Sector Lawyers Division was launched.

Anderson also played a leading role in establishing the ABA's Military Pro Bono Project with lawyers helping enlisted military personnel and their families in civil matters. "We've had millions of dollars worth of pro bono hours donated by volunteer lawyers in this," he says.

In his ABA Medal acceptance speech, Anderson quoted the 19th century lawyer-statesman Daniel Webster's description of justice as "the ligament which holds civilized beings and civilized nations together." Then Anderson said: "Now, I believe with all my heart that the American Bar Association keeps the ligament of justice strong." The ABA, he continued, is an organization that "works tirelessly for freedom and justice and whose moral compass is pointed always, always to true north."

According to association guidelines, the ABA Medal recognizes "conspicuous service to the cause of American jurisprudence." Anderson's service either was conspicuous or perhaps should have gotten notice. A good example of the latter occurred as he finished law school. Anderson still grumbles, more than 60 years later, when he tells how he and other Marine and Navy officers studying full time in the law school program also had to work full time in JAG offices in the D.C. area. After morning classes, Anderson would hustle to work at the Pentagon and stay afterward until 1 a.m. or so to work on his school cases in the law library there.

Graduation also meant a change in duty station, and then-Capt. Anderson had an exit interview with his boss, the Navy's judge advocate general, Rear Adm. Ira Hudson Nunn, whose daughter was Anderson's classmate and colleague on the law review.

"He asked if there was anything he could do for me," Anderson says. The admiral got an earful about how Navy and Marine officers in the law school program had to both work and study full time, a policy that the junior officer called "penny-wise and pound foolish."

"He said, 'I'll change it today,' and he did," Anderson recalls.

"Anything else?" the admiral asked. Anderson filled his other ear: One reason they had to work for JAG in the Washington area while in school was because they were geographically available—which meant they could choose only among George Washington, Georgetown or Catholic University of America—all in the district. Meanwhile, Air Force, Army and Coast Guard officers in similar programs had the pick of law schools around the country, including Nunn's alma mater, Harvard. Moreover, members of the other services had no other military duties while they were in law school.

"He said, 'I'll change it today,' and he did," Anderson says. Few who entered the law program in ensuing decades knew that he had cut that broad new path for them.

Earl Anderson accomplished a lot in that manner, over a lot of years.

This article originally appeared in the January 2015 issue of the ABA Journal with this headline: "Attorney, General: ABA Medal recipient Earl Anderson can boast of many accomplishments during his tenure in the association's leadership ranks."