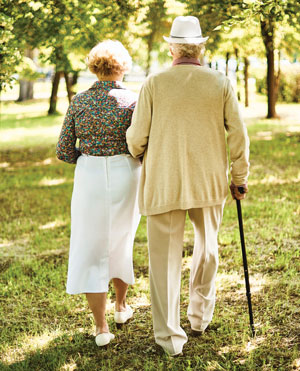 A bipartisan effort paid off this spring when Congress reauthorized the Older Americans Act of 1965. The action means that the act will more effectively respond to the needs of a population of seniors that is both growing in numbers and becoming increasingly independent.

The U.S. Census Bureau estimates there are nearly 50 million adults age 65 and older in the United States today. That number is expected to reach 72 million and represent more than 20 percent of the country’s total population by 2030. In addition, the number of family members and others who support and care for older adults will continue to grow from its current level of 40 million.

President Barack Obama, who signed the reauthorization legislation soon after it was passed by Congress, summed up the importance of the act in 2015 when he recognized its 50th anniversary. “Our nation is strongest when older Americans live comfortably in their golden years and have the opportunity to continue to contribute to the fabric of the country and society they helped to shape,” he said.

The ABA, a longtime advocate for the nation’s seniors, applauded the three-year reauthorization, specifically the legislation’s increased focus on combating elder abuse, the inclusion of provisions to ensure independence and avoidance of conflicts for long-term care ombudsmen, and the addition of legal services to the definition of “adult protective services.”

“Reauthorization of the OAA reaffirms and refines our country’s commitment to a safe, secure and dignified life for all older Americans” and reflects a “balanced, pragmatic approach to helping older Americans live longer with independence and dignity in their homes and communities,” the ABA said in a news release issued March 22 as the legislation moved toward final congressional approval.

In 2010, the ABA House of Delegates adopted policy urging Congress to reauthorize the act with legal assistance as a continuing priority, emphasizing elders’ increasing need for legal assistance to navigate the gantlet of complex rules to qualify for programs and benefits available to them. The policy was sponsored by the Commission on Law and Aging, which leads the association’s work in the field of elder law through research, policy development, advocacy, education and training, and through assistance to lawyers, bar associations and other groups working on issues of aging.

To combat both physical and financial abuse, the reauthorized Older Americans Act calls for improved coordination of activities between state and local offices that work with seniors; promotion of proven strategies for responding to elder abuse, neglect and exploitation in long-term care facilities; a requirement that states submit data to the federal government concerning elder abuse; and training through the Administration on Aging for state area agencies on aging and for service providers to educate them about elder abuse prevention and screening.

The reauthorization act also contains provisions to strengthen the act’s core programs by adjusting the formula for grants providing support services such as Meals on Wheels and senior center group meals.

Because seniors are remaining independent and working longer, the reauthorization enhances employment and community service opportunities to seniors by better aligning the Senior Community Service Employment Program with services available through the Workforce Innovation and Opportunity Act and other work-related development systems.

“Getting this reauthorization through Congress wasn’t easy,” said ABA President Paulette Brown, a partner at Locke Lord in Morristown, New Jersey, “but it demonstrates the commitment this country has to ensure that our older population can live longer, healthier lives without fear of exploitation and abuse.”

This article originally appeared in the June 2016 issue of the ABA Journal with this headline: “A Stronger Safety Net: ABA says the reauthorized Older Americans Act will make life easier for the nation’s seniors.”