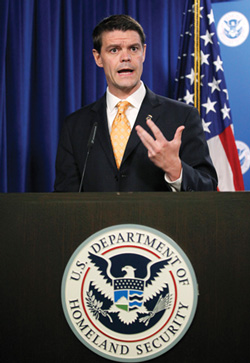 For years, the ABA called for the federal government to make greater use of prosecutorial discretion as a way to reduce the number of people going into the immigration court system. Finally, it appears someone was listening. In August, a joint task force of the departments of Homeland Security and Justice launched a case-by-case review of 300,000 pending deportations of undocumented immigrants to determine which ones could be classified as low-priority and closed administratively as a way to reduce the burden on the immigration adjudication system.

The action reflects the view of the Obama administration that it makes no sense to expend enforcement resources on low-priority cases, said DHS Secretary Janet Napolitano in a letter to Congress. From a law enforcement and public safety perspective, she said, it is better for DHS to continue focusing its resources on the highest priorities of “enhancing border security and identifying and removing criminal aliens, those who pose a threat to public safety and national security, repeat immigration law violators, and other individuals prioritized for removal.”

John Morton, director of U.S. Immigration and Customs Enforcement, issued a lengthy list of guidelines for prioritizing cases in June. Under the guidelines, low-priority cases include those involving people brought to the United States as children who have lived nowhere else, military veterans and spouses of active-duty military personnel. Other factors to be considered in determining low-priority status include a person’s age, ties to the community, physical or mental health, and whether the individual is a victim of violence, trafficking or other serious crimes.

The ABA weighed in on the issue in May when Karen T. Grisez, who chairs the Commission on Immigration, testified before the Senate Judiciary Committee (PDF). “Prioritization, including the prudent use of prosecutorial discretion, is an essential function of any adjudication system,” said Grisez, who is public service counsel at Fried, Frank, Harris, Shriver & Jacobson in Washington, D.C. “The ABA recommends that limited enforcement and adjudication resources should be preserved for conducting removal proceedings against those individuals within our country’s stated enforcement priorities, such as those who present a true risk to our national security or public safety, and those the government actually plans to remove.”

That position was adopted by the ABA House of Delegates after the 2010 release of a comprehensive examination of the structure and processes of the immigration removal adjudication system. The study was commissioned by the ABA.

Although the government’s new policy does not provide categorical relief for any specific group, individuals who may be spared detention and deportation include those who would be covered by the proposed Development, Relief and Education for Alien Minors Act, a measure supported by the ABA.

The legislation, introduced this Congress as S. 952 and H.R. 1842, would provide a path to legal residence and citizenship for young immigrants who meet certain requirements, including successful completion of a criminal background check, demonstration of good moral character, and completion of two years of college or military service.

Sen. Dick Durbin, the Illinois Democrat who is sponsoring the DREAM Act, said the legislation would benefit “the future doctors, lawyers, teachers, and maybe senators who will make America stronger.”

In a letter sent to members of the House and Senate when the legislation was being considered late last year, then-ABA President Stephen N. Zack emphasized that the act is a wise economic investment that would allow young immigrants who have been raised in the United States to stay in this country and contribute to American innovation and entrepreneurship.

Zack, who is administrative partner at Boies, Schiller & Flexner in Miami, wrote, “The DREAM Act is consistent with and promotes American ideals of fairness and opportunity.”