By Gerardo Alvarez and Jason Tashea 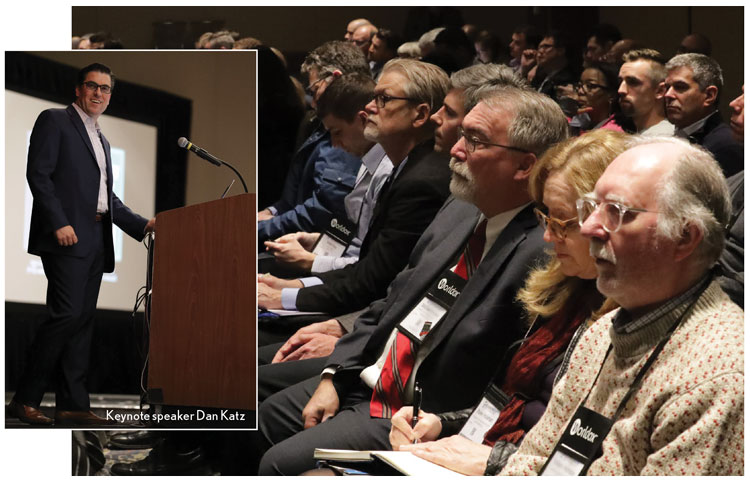 With a new and larger venue, ABA Techshow 2018 went beyond the usual focus on legal technology and provided sessions on leadership, team building and mindfulness.

At the Hyatt Regency in Chicago for the first time, the show paired panel discussions focused on mentoring female and minority lawyers alongside the traditional sessions examining workplace efficiency, as well as legal issues arising from old, new and emerging technologies.

Those technologies took center stage as multiple panelists and speakers talked in March about the ways lawyers can augment their practices by utilizing artificial intelligence, blockchain, virtual reality and the “internet of things.”

Referring to these emerging technologies as important rungs of the “fourth industrial revolution,” keynote speaker Dan Katz, associate professor and director of the Law Lab at the Chicago-Kent College of Law, argued that they hold the key toward restarting what he called a long-stalled trend of legal innovation.

Katz argued that the legal innovation agenda is not the coming onslaught of robot lawyers, contrary to popular media accounts. Rather, the future is a marriage between technology and humans, which he said is more powerful than either group alone. “To the legal innovators, I say let’s stay the course,” he said about looking toward the future.

Blockchain, for example, can make legal services more efficient and less costly by establishing automated smart contracts that don’t have to rely on human intermediaries to be enacted. According to David Fisher, founder and CEO at Integra Ledger, a legal blockchain consortium, lawyers have to first understand how blockchain functions before it can be effectively used in the legal industry.

“The first step is for attorneys to understand what it is because there’s a common misconception that blockchain is a new application,” Fisher said during his “Blockchain Reaction: The Next Big Thing” presentation. “People are used to thinking in terms of new software, new apps … but the reality is that just how you don’t go and buy the internet, you don’t go and buy a blockchain.”

This misconception has held back the development of new, efficient legal tools that implement blockchain—which Fisher said could make legal services more effective because blockchain establishes digital trust between two parties, does not necessitate a third-party intermediary, and is more secure.

Another emerging technology lawyers should be aware of is the internet of things. This is defined by a device’s connectivity to the internet and other devices, as well as the user data it collects. Given the ubiquity of these devices, as well as the incredible volume of information they collect, it was only a matter of time before they started affecting criminal and civil cases and raising novel legal issues.

“In some ways, it is like the early stages of e-discovery,” said Antigone Peyton, chair of the intellectual property and technology law practice at Protorae Law in Tysons, Virginia. “It’s the Wild West.”

“A lot of the consumers that have them are unaware that their data is being collected,” said Bob Ambrogi, a legal technology blogger at LawSites. He added that lawyers have to be cognizant of the devices clients have and how to retrieve their data.

Meanwhile, advances in virtual reality mean legal education—and even litigation—could soon take place in cyberspace rather than in the physical world. Kenton Brice, director of technology innovation at the University of Oklahoma College of Law, said the college has launched the Oklahoma Virtual Academic Laboratory to provide students across the campus with educational virtual reality experiences.

He said practicing attorneys already have been taking advantage of such technology to simulate situations such as evidence presentation in mediation and arbitration, as well as discovery requests and responses. But he acknowledges that implementation in the classroom is a work in progress. “We’re still trying to figure out student adoption,” Brice said.

This article was published in the June 2018 issue of the ABA Journal with the title "Looking Ahead: ABA Techshow 2018 examined where the legal profession is heading—with a heavy focus on new and emerging technology."