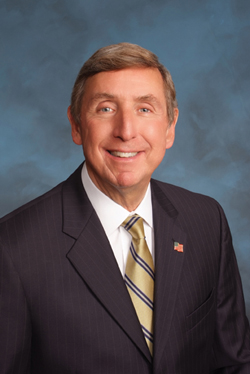 In a rare example of bipartisan cooperation during the 113th Congress, the Task Force on Over-Criminalization completed a year and a half of hearings this summer on the state of the nation's criminal justice system and how it can be improved.

The House Judiciary Committee established the task force in May 2013 for an initial six months in response to the increasing number of federal crimes that provide for prison sentences, which have driven up incarceration rates.
In a rare example of bipartisan cooperation during the 113th Congress, the Task Force on Over-Criminalization completed a year and a half of hearings this summer on the state of the nation's criminal justice system and how it can be improved.

The House Judiciary Committee established the task force in May 2013 for an initial six months in response to the increasing number of federal crimes that provide for prison sentences, which have driven up incarceration rates. At the urging of the ABA and other groups, the task force was extended through this August so it could continue to provide a forum for discussing issues related to over-criminalization. The task force, chaired by Rep. F. James Sensenbrenner, R-Wis., with Rep. Robert C. Scott, D-Va., serving as ranking member, held 11 hearings on a wide range of issues, including criminal code reform, over-federalization, mens rea, collateral consequences of conviction and penalties.

According to Scott, there are now more than 4,000 federal criminal provisions plus hundreds of thousands of federal regulations that impose criminal penalties, often without requiring that criminal intent be shown to establish guilt.

The ABA has been at the forefront of efforts to evaluate and improve federal criminal laws for many years. William N. Shepherd, 2012-13 chair of the ABA's Criminal Justice Section, was one of the first witnesses to appear at the task force's initial hearing in June 2013.

Serious problems at every stage of the criminal justice process "undermine basic tenets of fairness and equality as well as the public's expectation of safety," resulting in an "overburdened, expensive and often ineffective criminal justice system," said Shepherd, a partner at Holland & Knight in West Palm Beach, Florida. He cited the widely held view that decades of expansion of federal crimes have resulted in the criminalization of behavior that often lacks criminal intent, and that would be better managed through civil fines or noncriminal sanctions. In addition to the financial burden on the corrections system, overreliance on incarceration has a broad negative impact on the future income, employment prospects and family involvement of the large population of individuals in the United States who spend time in prison, Shepherd testified.

Mathias H. Heck Jr., whose term as chair of the Criminal Justice Section ended Aug. 31, testified before the congressional task force in June. Heck, the prosecuting attorney for Montgomery County, Ohio, in Dayton, said public safety concerns are not well-served by the proliferation of laws that prevent ex-offenders from finding employment and becoming productive citizens. While some collateral consequences serve important and legitimate public purposes, such as keeping firearms out of the hands of those convicted of violent crimes, he said, other restrictions—loss of professional licenses, denial of public welfare benefits and disenfranchisement, for instance—are more difficult to justify.

The ABA recently launched the National Inventory of the Collateral Consequences of Conviction, a free state-by-state database that catalogs more than 45,000 collateral consequences that may affect people because of their criminal records. After Congress directed the National Institute of Justice to collect and study collateral consequences in all U.S. jurisdictions, the NIJ selected the Criminal Justice Section to do the necessary research and analysis. Funding for the project has come primarily from the institute.

In 2003, the policymaking House of Delegates adopted a comprehensive set of standards that were designed to encourage awareness of the full legal consequences of a criminal conviction and encourage reforms in this area of law. The ABA also helped create Clemency Project 2014 at the request of the Justice Department to provide pro bono assistance to federal inmates serving sentences for nonviolent crimes who likely would have received shorter sentences if they had been sentenced today.

This article originally appeared in the December 2014 issue of the ABA Journal with this headline: "Too Much Prison Time: ABA voices concerns about the impact of over-criminalization of U.S. laws.

In print and initial online versions of “Too Much Prison Time,” December, the photo accompanying the story is of Mathias H. Heck Jr., immediate-past chair of the Criminal Justice Section, not William N. Shepherd, 2012-13 chair.