Advancement of Women Lawyers: Barriers Must Be Removed so Female Attorneys Can Equally Participate 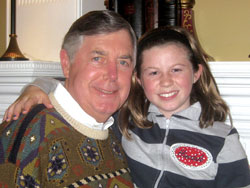 When Joan and I were blessed with two sons, we could not have been happier. Or so we thought. Then our grandchildren, Miss Brooke and William V, arrived. Like many grandparents, I am of the mind that these two extraordinary young people—so full of promise at such a young age—can do no wrong.

However, I am also acutely aware of the challenges Miss Brooke may face as she pursues a career path. Right now she loves cheerleading and tennis, but she could decide she wants to be a dancer, doctor or—be still my heart—a lawyer.

We know many women are making that choice, as nearly half the law school population is female. But beyond graduation, the statistics are still very discouraging.

Women constitute just a third of all lawyers, 22 percent of the federal judiciary and 26 percent of state judges. In law firms, 45 percent of associates are women but just 15 percent have reached equity partnership. At the largest 200 law firms, the numbers are even more dismal.

Female lawyers too often earn 75 percent or less of what male counterparts earn for doing the same job. This is just not acceptable. The ABA recognizes that overt and subtle barriers continue to deny women full integration and equal participation in the practice of law. We need to maintain an open dialogue about these issues, eliminate the barriers, and create workplace environments that allow female attorneys to maximize their potential.

The underrepresentation of women in law firm leadership positions and the disparity in compensation have contributed to the high rate of attrition of women from the profession. Other factors are law firms’ inflexibility with billable-hour quotas, stigmatization of part-time and flex-time programs, and unequal treatment of women in allocating credit for business development.

It is imperative that women achieve a critical mass on management and compensation committees. For the first time since 2006, there has been a decline in the number of women entering big-firm practice, according to a National Association of Women Lawyers study. The survey also found that female lawyers are more likely to hold non-partner-track positions, and that female equity partners earn just 86 percent of what their male peers earn.

The ABA Commission on Women in the Profession works tirelessly to advance workplace policies and provide resources for female lawyers. Its Women in Law Leader ship Academy offers advice on leadership, career development and networking, and its Women of Color Research Initiative focuses on the specific issues confronting female lawyers of color in law firms, as well as corporate and government settings. ABA groups such as the Young Lawyers Division and the sections of Litigation, Business Law and Law Practice Management also have very active women’s committees and initiatives.

To increase the number of women in the judiciary, the ABA has urged President Obama to consider more women for federal bench appointments. We applaud the fact that there are now three women on the U.S. Supreme Court, and that 50 percent of the president’s confirmed nominees are women. We will continue to encourage female appointments at all levels of our court system.

As President of the ABA, 44 percent of my member appointments are women, and 35 percent of the ABA’s Board of Governors is female. Female representation among our section and division chairs rose from 32 percent to 39 percent since 2009.

Equality for women is a work in progress. Together we can eliminate gender bias, equalize pay and strengthen the pipeline now and for the future, so that all women—including my 10-year-old Miss Brooke—have equal, unlimited opportunity for success and fulfillment in the law.

After all, Miss Brooke is my granddaughter; like all women, she deserves no less.