Meeting Miss Nelle: Ala. Lawyer Has a Rare Encounter with the Author of 'To Kill a Mockingbird' 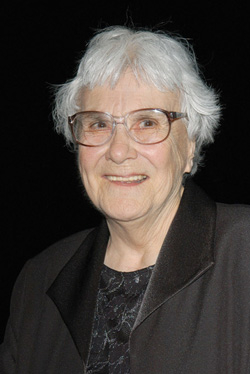 Photo of Harper Lee in 2005 by Stephen Shugerman/Getty Images.

Count Clark A. Cooper, an attorney in Birmingham, Ala., among the fortunate few people who have been allowed inside the inner sanctum of Harper Lee’s private life. By the normal standards of our media-drenched world, it shouldn’t be very hard to meet someone of her renown. She ought to be out there like any self-respecting celebrity, basking in the spotlight as the author of what arguably is the most beloved American novel written in the 20th century.

To Kill A Mockingbird, an evocative tale of growing up, family life, morals and race relations in a small Southern town during the 1930s, achieved iconic status long ago. After the book was published in 1960, it became an instant best-seller, won the Pulitzer Prize for fiction, spawned an equally beloved film adaptation, and was translated into at least 40 languages; it still sells around a million copies a year.

The book also produced the character of Atticus Finch, perhaps the ultimate role model for lawyers seeking to find their ethical bearings in an increasingly harsh legal environment. Atticus—we all seem to know him on a first-name basis—is a stern but loving single father to daughter Scout and son Jem. As a lawyer, he is willing to incur the wrath of his community by representing a black man accused of raping a white woman.

Lee participated in media events for To Kill A Mockingbird, but she reportedly gave her last full interview in 1964. And then she went silent, preferring her privacy to the limelight. She has made a few appearances at award ceremonies, including a visit to the White House in 2007 to receive the Presidential Medal of Freedom, but that’s about it.

Not even Oprah Winfrey could get Lee to sit for an interview. Winfrey finally arranged a lunch meeting with Lee in New York City, which she describes in Scout, Atticus & Boo: A Celebration of Fifty Years of To Kill a Mockingbird. The book was published last year by Mary McDonagh Murphy, who also produced a documentary film that explores the phenomenon of Mockingbird and the enigma of its author. “I knew 20 minutes into the conversation that I would never convince her to do an interview,” writes Winfrey, who knows a little something about celebrity. “She said no, and I knew that no meant no.”

Watch the trailer for “Hey, Boo: Harper Lee & To Kill
a Mockingbird.”

(The film, Hey, Boo: Harper Lee & To Kill a Mockingbird, is being screened this summer in various cities across the U.S.)

Cooper, who maintains a litigation practice as a partner at Balch & Bingham in Birmingham, isn’t quite sure what opened the doors for him. It may be that Lee, a fellow Alabaman, responded to Cooper’s traditional Southern manners. It might also be the endorsement he got from Lee’s older sister, Alice Finch Lee, who still practices law at age 99 in their hometown of Monroeville. And maybe Lee was intrigued by the award Cooper wanted to present to her.

But Cooper suspects it was the sweet cakes he brought along that really sealed the deal.

THE ROAD TO MONROEVILLE

Cooper’s odyssey began a year ago at the 2010 ABA Annual Meeting in San Francisco, when, as the state delegate for Alabama, he introduced a recommendation by the state bar acknowledging the 50th anniversary of the publication of To Kill a Mockingbird. (Cooper credits James R. Silkenat, a partner at Sullivan & Worcester in New York City who represents the New York State Bar Association in the House, with the original idea for the measure.)

“Taken as a whole, the influence of To Kill a Mockingbird and of Atticus Finch on us, as lawyers, is remarkable,” states a brief report submitted in support of the recommendation. “Atticus Finch encourages us to supplant our cynicism and malaise with integrity and empathy. We, as a profession, are better because of Atticus Finch.”

Cooper invited Lee to attend the session where the House took up the recommendation. “I knew the answer before I asked,” he says, but in her letter declining his invitation, Lee wrote, “ ‘Should it not pass the House, I still appreciate your efforts.’ That’s how humble she is.” The House, then with 561 members, passed the measure unanimously.

Cooper’s next idea was to deliver some memento of the House’s action to Lee. A copy of the recommendation was signed by the ABA’s two highest-ranking officers at the time it was passed—President Carolyn B. Lamm of Washington, D.C., and House Chair William C. Hubbard of Columbia, S.C.—and then framed. A DVD of the proceedings also was made. 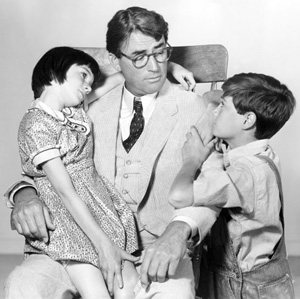 Siblings Scout and Jem consult dad Atticus Finch (center), as portrayed by actor Gregory Peck in the film adaptation of To Kill a Mockingbird. Photo by Silver Screen Collections/Getty Images.

The real challenge for Cooper was how to convince Lee to let him make the presentation in person. Compounding her devotion to privacy is the fact that Lee, now 85, faces health issues and resides with her sister in an assisted-living facility in Monroeville, a small town about 20 miles off Interstate 65 in southwest Alabama not far from Mobile. Monroeville reminds a lot of people—residents and visitors—of the fictional Maycomb, where Mockingbird takes place.

Cooper contacted Tonja B. Carter, one of the lawyers at Barnett, Bugg, Lee & Carter, the firm where Alice Lee still practices on a daily basis. It’s the same firm where Alice and Harper’s father, A.C. Lee, practiced. Alice Lee consented to meeting Cooper. Arriving there on Jan. 6, he found her desk piled high with case files—mostly wills and probate matters—and the heat cranked up to 80 degrees.

Alice and Carter “were hesitant,” says Cooper. “They thought I’d be really obnoxious because I’m from a big city.”

The cakes may have saved the day. Cooper credits his wife, Grace Ann, with suggesting that he pick up some sweets at a good bakery. “I would have shown up with a bag of Famous Amos or something,” he says.

When Cooper brought out the cakes for Alice, she said, “Oh, aren’t you sweet!”

The cakes may have broken the ice, but Cooper still had to agree to some ground rules before Alice and Carter would take him to see Harper. Those rules were simple but emphatic: No actual interview. No more than five minutes. No recording devices or photos. No guests. And don’t be pushy.

Alice said, “What do you think about that?” says Cooper. “I think she was waiting for a counteroffer.” Instead he responded, “Yes, ma’am, that sounds good to me.”

When Cooper, Carter and Alice arrived at the assisted-living facility, Harper Lee was sleeping. A small sign at the door to her room has a fictitious name on it. Alice knows her by Nelle, her given name.

“I’ll wake her,” said Alice. She went into the room.

“What’s this all about?” Cooper heard another voice say.

“It’s the nice young man from the ABA,” Alice said.

After being ushered in, Cooper began to tell Nelle Harper Lee about the action by the House of Delegates and how it passed unanimously. “That’s hard to believe,” she said.

Carter asked whether Lee would consider signing the copy of Mockingbird that Cooper had brought along.

Carter then mentioned the cakes. Accepting them, Lee carefully counted them out, then put her name—her real name—on the box.

Cooper thanked Lee for the inspiration her book has been to him and other lawyers. “I’m not just saying that; I really mean it,” he said.

Then she said, “Have you still got that book?”

Because her eyesight is growing weak, Lee explained, she has to use a table with a large magnification lamp when she signs something, writes or reads. Normally she doesn’t sign books anymore because she suspects most requests are from people who just want to sell them. Her room was filled with stacks of mail.

And then, says Cooper, Lee broke one of her own ground rules when she agreed to have her photo taken with him. He used his cellphone to take the shot. 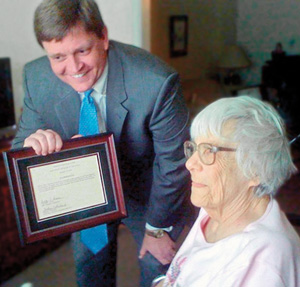 Clark Cooper presented Lee with the ABA’s measure and with some sweet cakes. Photo courtesy of Clark A. Cooper.

Returning to Alice Lee’s law office, they talked a bit about practice. “She said she loves the law, loves helping people and doesn’t know what else she would do,” he says. “I was struck by the humility of both of them. They are somebody with every right to be pumped up or arrogant, but they’re nothing like that. They are two nice Southern ladies.”

When he was leaving, Carter gave him some good news. “You passed the test,” she said. “You can come back anytime you like.”

The drive from Monroeville back to Birmingham on I-65 is a long 3½ hours, but Cooper had plenty to think about.

He remembered how To Kill a Mockingbird, along with his father, N. Lee Cooper, helped influence his decision to become a lawyer. Lee Cooper is a shareholder at Maynard Cooper & Gale in Birmingham who served as ABA president in 1996-97.

As youngsters, Clark Cooper and Harper Lee had similar experiences with their attorney-fathers. In Birmingham, Lee Cooper would sometimes take his son with him to court. Down in Monroeville, A.C. Lee would do the same thing with his daughter, she recalled in a 1961 interview with Life magazine.

In a roundabout way, that experience with a father may have brought the two children to a similar place. Lee’s book, Cooper says, “gets back to the core values and doing the right thing. It’s a reminder of what we need to do as lawyers, that we need to be helping people.”