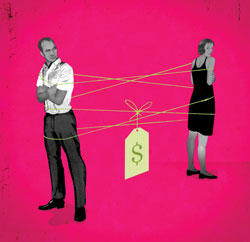 If workers’ compensation law “can put the value on a [human] toe, how do you quantify how much the loss of a marriage means to somebody?” asks Atlanta lawyer Randall Kessler. “Divorce law is one of the most discretion-filled areas of law there is,” says Kessler, chair of the Family Law Section of both the ABA and the State Bar of Georgia.

And alimony is one of the most frequently litigated issues in family law, attorneys say. Many agree that divorcing spouses deserve more predictable outcomes.

As a result, states are starting to examine the uncertainty of alimony awards, as policymakers take aim at a spousal support system that’s been attacked as antiquated, unbalanced and unfair.

In September, Massachusetts became the latest. After years of lobbying and debate, the state passed the Alimony Reform Act, which would dramatically change how maintenance payments are awarded.

Along with implementing a formula for calculating alimony awards, the bill terminates alimony when the payer reaches retirement age and places a 12-year limit on payments. It also ends lifetime alimony—something most states have already eliminated or are trying to modify.

For example, a number of states, including Delaware, Illinois and Virginia, end alimony when the recipient cohabitates. Oklahoma is making it more difficult for an ex-spouse to share military retirement pay in a divorce settlement. Rhode Island mandates that alimony is to last for a “reasonable period of time” until the recipient becomes self-supporting, usually about five years.

Then there are states that question the need for spousal maintenance at all. In 2004, a Florida lobbying group petitioned to amend the state constitution and abolish alimony altogether, claiming it was involuntary servitude. That campaign was ultimately unsuccessful, but some Florida legislators are working to impose limits on alimony awards and move away from permanent alimony.

While no state has yet enacted strict quantitative formulas akin to federal sentencing guidelines for post-divorce alimony, bar associations and legislators are nevertheless providing their own quantitative guidelines rather than relying on independent judicial discretion. Codified guidelines for temporary alimony while a divorce is pending, known as alimony pendente lite, are becoming more common; they offer judges a framework for determining permanent awards.

“It would be nice to have a starting point to advise clients that this is more or less what you’re going to get and can expect,” Kessler says.

The Chicago-based American Academy of Matrimonial Lawyers tried to provide a starting point in 2007, when it recommended alimony guidelines with the goal of more predictable and equitable results. The group studied approaches in different parts of the country to produce a formula that could work across jurisdictions.

The AAML suggests calculating duration of the award by multiplying the length of the marriage by a certain numerical factor.

And the academy emphasizes that its guidelines are meant to be “aspirational,” acknowledging a resistance among family practitioners to the idea of restrictive formulas. To allow for flexibility, the AAML offers numerous deviation factors to take into account when calculating outcomes, such as the spouse’s age and health, and whether the recipient is the primary caretaker of a minor.

“Some states have a durational component for alimony; some disallow alimony for fewer than 10 years of marriage. Some states use gross income to calculate awards; others use net,” says the academy’s immediate-past president, Linda Lea Viken of Rapid City, S.D. “It’s really a little scary when you take a look at it. I don’t think it’s a step in the right direction.”

Despite these safeguards, the AAML passed its recommendations by only a single vote—further evidence of the controversy provoked by the idea of imposing guidelines.

“Some practitioners worry that guidelines will become the default order for the court, and that some lawyers would take the easy way out,” says Viken. “I think you have a greater chance of the result fitting the facts of the case if you simply have criteria that are considered by the court.”

Many lawyers say that allowing a judge discretion to weigh these factors offers flexibility that formulas don’t. States usually provide judges with factors to consider in reaching an alimony decision, including the length of the marriage, the age and health of the parties, standard of living during the marriage, and the ability of each party to acquire assets in the future.

“Courts are more hesitant to deviate from numerical guidelines, and we do lose some of the court’s discretion,” says Karen Pinkert-Lieb, a partner with Schiller DuCanto & Fleck in Chicago. “It takes the creativity out of lawyering, and not necessarily in the best interest of the parties.”

Despite the uncertainties of computing alimony, Kessler nevertheless argues that there is enough guidance already in place for equitable dispositions in alimony cases, particularly if a lawyer is doing his or her job. He acknowledges that horror stories are out there but says they aren’t pervasive enough to warrant radical changes in the law.

Lynne Gold-Bikin, a partner at Weber Gallagher in Norristown, Pa., who has been practicing for 35 years, says she has had bad experiences with judges who bring their own biases to the bench. She says it’s particularly so for those who rotate through family court and may not fully grasp the issues.

“I think judges need guidelines because many of the ones they put on the bench today have no knowledge about what’s important, don’t care about family law, and they’re not people who have worked in this field,” Gold-Bikin says. “Many have criminal law backgrounds; some have civil experience.”

Gold-Bikin supports the idea of numerical guidelines—within limits. She points to federal sentencing guidelines and mandatory minimums as examples of a system that fails to account for differences in individual cases.

“We’ve taken away discretion in the criminal law area. It’s ridiculous,” Gold-Bikin says. “So I’m not big on mandatory standards, but I do think there should be guidelines. But guidelines should not be dispositive of the issue. You have to give discretion.”

Others say the answer may be avoiding the issue altogether. Jeff Landers, founder of Bedrock Divorce Advisors, a financial strategy firm in New York City, says the best solution may be an upfront lump-sum payment in lieu of alimony, if there are enough assets for this option.

“You can be awarded alimony, but that doesn’t guarantee you’re going to receive payment,” Landers says. “If you get a lump sum, you don’t have to deal with it. Then everyone’s over and done with it, especially if your divorce has been acrimonious.”

Gold-Bikin has observed a general hostility toward the idea of alimony, but she says it should be considered “compensation to those who sacrificed their life to stay home and raise the kids.”

Gold-Bikin recalls the case of the Harvard Business School grad who gave up her career to put her husband through medical school. Two dozen years, four kids and multiple affairs by her husband later, the marriage fell apart. The wife makes about $50,000; the husband, $1 million. Gold-Bikin says there’s no question the wife deserves alimony.

She compares failed marriage to the dissolution of a partnership. “Or how about the wife or husband who worked in a spouse’s company to help them out? Maybe they’re working for nothing and are not earning a Social Security history. Should that party get alimony?”

Whatever the answer, states and lawyers are continuing to discuss how best to apportion the proceeds.