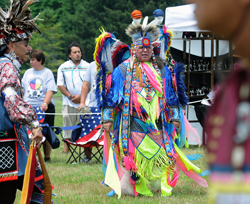 In many American Indian religions, the eagle is considered a link to the creator and the spirit world. Its feathers are an important part of rituals, facilitating spiritual or physical purification.


But in the 21st century, acquiring eagle feathers is more a bureaucratic than a spiritual matter. Because the Bald and Golden Eagle Protection Act outlaws killing eagles, or even picking feathers off the ground, new feathers may be acquired only through the National Eagle Repository. At its facility, located near Denver and run by the U.S. Fish and Wildlife Service, workers fill orders using eagles found dead in the wild.

Native religious practitioners have long complained about this system. It's slow, they say. The repository's website says it takes three to six months to fill an order for loose feathers and two to five years for a whole bird. And whole eagles have limited usefulness because they often arrive partly decomposed, critics say.

But the biggest criticism of the repository is perhaps that not everyone can use it. Fish and Wildlife Service regulations say only members of federally recognized tribes may apply for permits, which are required to place an order. And federal recognition is notoriously slow, taking decades in some cases.

That leaves more than 200 unrecognized tribes and a handful of non-Indian practitioners without a legal way to get new feathers, says Milo Lone-Eagle Colton, a lawyer and professor at St. Mary's University in San Antonio.

Practitioners ineligible to use the repository have challenged this system, arguing that the distinction between members of federally recognized tribes and other Americans violates the First Amendment's free exercise clause and the Religious Freedom Restoration Act, the 1993 statute aimed at preventing laws that substantially burden free exercise.

But the U.S. Court of Appeals has rejected RFRA-based challenges to eagle feather laws in the 9th Circuit at San Francisco, the 11th Circuit at Atlanta and, to some extent, the Denver-based 10th. The courts never questioned the sincerity of practitioners' beliefs, but found the government's interests in protecting eagles or meeting its responsibilities to federally recognized tribes sufficiently compelling; the courts also found that existing law was the least restrictive means to achieve this.

But that was before the U.S. Supreme Court's June ruling in Burwell v. Hobby Lobby Stores. Among other issues, the court required that the law be crafted to protect religious liberty more broadly, thus making it more difficult for the government to pass the RFRA's least-restrictive-means test.

Calling that standard "exceptionally demanding," the Hobby Lobby court said that a federal department must show "that it lacks other means of achieving its desired goal without imposing a substantial burden on the exercise of religion by the objecting parties in these cases."

In the most recent eagle feather case, McAllen Grace Brethren Church v. Salazar, the 5th Circuit at New Orleans cited Hobby Lobby 18 times. The court sent an RFRA challenge back to Texas district court, asking the government for stronger arguments supporting its restrictions on who may own eagle feathers.

Colton, who represented the plaintiffs in McAllen, says he expects the issue will go to the Supreme Court.

"We're the only people that I know of in the U.S. in which the federal government tells us who can be members of our congregations," says Colton, who is of Cherokee and Scotch-Irish descent.

McAllen grew out of the seizure of eagle feathers belonging to Robert Soto and Michael Russell. The men were performing devotional dances at a South Texas powwow; Soto is the pastor of McAllen Grace Brethren Church.

Their feathers were spotted by an FWS agent, who determined that Soto was a member of the unrecognized Lipan Apache tribe, and that Russell was not a tribe member. (Colton says he's Muscogee Creek by birth and married to Soto's sister.) The agent confiscated their feathers under the Bald and Golden Eagle Protection Act and a related law, the Migratory Bird Treaty Act. Russell was also required to pay a fine. In exchange, the federal government agreed to decline further criminal investigation.

After exhausting Soto's administrative remedies for getting the feathers back, the men sued, joined by Soto's church, several co-religionists and other native groups. A federal district court granted summary judgment to the federal government, rejecting the plaintiffs' First Amendment and RFRA claims.

In August, the 5th Circuit said the federal government provided insufficient evidence that its current restrictions on eagle feathers were the least restrictive way to meet its goals. The government relied on arguments that other courts had accepted, but the 5th said those cases were decided before Hobby Lobby "clarified how heavy the burden is on the [Interior] Department." The government did not petition for an en banc hearing or Supreme Court review, so the case will go back to the South Texas district court.

Robert Clinton, who teaches American Indian law at Arizona State University, says McAllen is important—not only because it was favorable to Indian religious rights but also because it raises the topic of Indians who are not part of federally recognized tribes. Census data (drawn from self-identification) suggest this includes more than half of the American Indian population.

This matters because the eagle protection act creates an exemption for "the religious purposes of Indian tribes." The implementing regulations are what narrowed eligibility to federally recognized tribes. In court, the government argued that this helps FWS agents determine who is permitted to own feathers.

"There's a lot of dispute about what the establishment clause means these days, but one thing it clearly means is that the government doesn't get to give licenses to the Episcopal Church to preach but not to the Baptist Church," Goodrich says. "That's basically what's happening here."

Though the fund also handled Hobby Lobby, Goodrich doesn't believe that case was the key in McAllen. He notes that the 5th Circuit made favorable RFRA rulings before Hobby Lobby on issues such as animal sacrifices in Santeria and Sikhs carrying knives to work.

Similarly, Goodrich believes the existence of secular exceptions to the acts covering eagles and birds—for scientists, power plants and farmers—could be fatal to the government in McAllen. Indeed, the Interior Department recently allowed wind farms to obtain 30-year permits to kill eagles accidentally.

NEED FOR A 'CLEAN' EAGLE

Though the 5th Circuit expressly didn't reach the issue of killing eagles, Clinton feels McAllen could help tribes obtain permits to "take" eagles for religious purposes. Though the law allows such permits, the federal government has granted very few. A pending lawsuit in Wyoming charges that the government is illegally denying such a permit to the Northern Arapaho tribe. The tribe argued in late August that McAllen sets standards too high for the government to overcome.

Court records say the Northern Arapaho prefer not to use the repository because they need a "clean" eagle. This echoes long-standing complaints about the repository. The 5th Circuit drew attention to some of them in dismissing an argument that expanding eligibility would worsen wait times.

"The department cannot infringe on Soto's rights by creating and maintaining an inefficient system and then blaming those inefficiencies for its inability to accommodate Soto," the court wrote.

This article originally appeared in the January 2015 issue of the ABA Journal with this headline: "Fuss and Feathers: American Indians challenging eagle feather rules get a boost from Hobby Lobby."