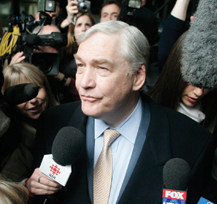 Few would dispute that employees owe a duty of honest services to their employer. And a secret scheme by an employee to take money from an agency or company certainly sounds like a crime.

But how about acts that don’t involve a loss of real property, such as an undisclosed conflict of interest?

Or a furtive effort to get a job for a friend with the same employer?

The acts may be dishonest, but you wouldn’t ordi­narily think of them as federal crimes. That’s because nothing of real value has been stolen. Yet, since 1988 the federal anti-fraud statute has made it a crime not just to defraud someone of money or property but to scheme “to deprive another of the intangible right of honest services.”

Just what this law means has long been the topic of lively debate in the appeals courts and among experts in white-collar crime. The U.S. Supreme Court has agreed to reconsider the broad reach of this anti-corruption law in three cases this term.

On Dec. 8, the court will hear two honest-services cases: Black v. United States, in which a jailed former newspaper tycoon claims he was wrongly convicted of defrauding his company because he did not intend “economic harm” to it; and Weyhrauch v. United States, to consider whether a public official must violate a state law to be charged with defrauding the state of his honest services.

In February or March, the court will hear the second case arising from prosecutions of prominent corporate executives, Skilling v. United States. There the court will consider the broadest challenge of all: whether the honest-services fraud statute should be struck down as unconstitutionally vague.

All three cases test whether the law is too open-ended and people deserve a “fair warning” that certain conduct is against the law.

But Justice Antonin Scalia put a harsh spotlight on the honest-services fraud statute in February. Rather than define a crime, Scalia said, Con­gress left it to prosecutors and judges to define on a case-by-case basis what it is that constitutes an honest-services fraud.

“This expansive phrase invites abuse by headline-grabbing prosecutors in pursuit of local officials, state legislators and corporate CEOs who engage in any manner of unappealing or ethically questionable conduct,” Scalia said, dissenting to the denial of cert in Sorich v. United States.

The law has been used to “impose criminal penalties upon a staggeringly broad swath of behavior” and is so broad, Scalia said, that it “would seemingly cover a sal­aried employee’s phoning in sick to go to a ballgame.”

The cert petition came from Robert Sorich and two other former city aides to Chicago Mayor Richard M. Daley. They had been convicted of honest-services fraud and sent to prison for steering city jobs to campaign workers. Despite its long history of machine pol­itics and patronage hiring, in the early 1980s Chicago officials agreed to a consent decree pledging to end patronage hiring.

Still, Sorich and his co-conspirators were not accused of pocketing money, nor was their scheme said to cost the city or its taxpayers. The hired workers showed up and did the jobs.

Noting the dispute in the lower courts over what is honest-services fraud, Scalia said in closing, “It seems to me quite irresponsible to let the current chaos prevail.”

His lone dissent appears to have made an impact. Within the next few months, the court granted review in the three cases that challenge the use of honest-services fraud theory.

“It looks like some of the others read Scalia’s dissent and decided he might be right,” says Julian Solotorov­sky, a former federal prosecutor in Chicago. “There is no vaguer statute on the books than this one. I’m surprised it has taken 21 years to get this before the Su­preme Court.”

Scalia has some history on the issue, dating to his first year on the court. In the 1970s and ’80s, prosecutors regularly used the mail fraud statute to pursue corruption cases involving all manner of dishonest schemes.

In 1987, however, the Supreme Court reined in the law and said a fraud must involve depriving someone of money or property. It “does not extend to an intangible right of the citizenry to good government,” said Justice Byron White in McNally v. United States. In that case, the court overturned the fraud convictions of a Ken­tucky official who was said to have schemed to give the state’s insurance business to several firms that included his friends and political allies.

But White noted the state and its taxpayers had lost nothing, since they paid the same premiums for insurance as before. Scalia joined the 7-2 majority, while Justice John Paul Stevens dissented, saying the ruling would shield secret, corrupt deals involving public officials and private benefactors.

In response, Congress passed a one-line amendment that the anti-fraud law includes depriving someone of the “intangible right of honest services.” In recent years, the law has become a favorite tool of federal prosecutors in cases of public corruption and, increasingly, corporate corruption. It’s especially useful for prosecuting secret deals that are corrupt but do not involve an obvious transfer of money.

“It’s used a lot because bribery is so hard to prove. You have to have a quid pro quo,” says Peter R. Zeiden­berg, a Washington, D.C., attorney and former prosecutor with the Justice Department’s Public Integrity Section. He says the anti-fraud law can be properly used to prosecute public officials who sell out the public interest for private gain.

“Suppose it’s a legislator, and a company has put his wife or children on the payroll, and he’s pushing legislation that benefits the company,” he says. This would be a classic case of honest-services fraud, he adds.

But Zeidenberg says he is troubled by the growing use of the law to pursue alleged corporate corruption. “I think it really becomes problematic in the private sector,” he says.

Defendant Conrad Black, a Ca­nadian historian, controlled a chain of newspapers, including the Chi­cago Sun-Times, the Daily Telegraph of London and the Jeru­salem Post. He was accused of looting his company to fund a lavish lifestyle.

His lawyer, Miguel Estrada of Washington, D.C., says a jury in Chicago acquitted Black of the most serious charges that he treated the company as his “personal piggy bank.” He was convicted on three counts of mail fraud involving $5.5 million that Black and his as­sociates took upon the sale of the newspapers.

According to Black, this was a legitimate management fee, and his conviction should be reversed because the jury was not required to find he intended to harm the company. Disagreeing, U.S. Solicitor General Elena Kagan said in her brief that Black’s “self-dealing scheme” to secretly abscond with millions of dollars fits the classic definition of a fraud.

That same day the court will hear the case of Bruce Weyhrauch, an Alaska legislator who was planning to leave the legislature when he mailed his resumé to Veco Corp., an oil services company, and said he was interested in future legal work. He was later indicted under federal laws for public corruption after voting to lower the tax rate for Veco. However, he did no work for Veco after leaving the legislature and received no money from the company.

In a pretrial ruling, a judge threw out the honest-ser­vices fraud charge against Weyhrauch because state law did not require a legislator to disclose his dealings with the company. But prosecutors appealed, and the 9th U.S. Circuit Court of Appeals at San Francisco said an “undisclosed conflict of interest” is enough to sustain a charge of honest-services fraud.

Finally, in early 2010 the court will hear the case of Jeffrey Skilling, former Enron CEO, who was convicted of securities fraud for cheating investors and defrauding the company of his honest services. His lawyers argue Skilling could not be guilty of defrauding Enron because he sought to prop up the company, not steal from it. If a charge of honest-services fraud does not demand proof of private gain by the alleged schemer, then the statute itself is unconstitutional, his lawyers say.