An ode to the Spanx design patent duel 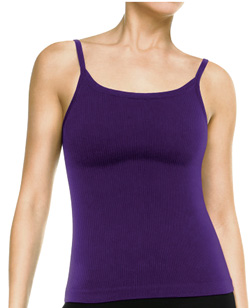 Want to know how popular shapewear is?
Analysts say it’s an $812.5 billion-dollar biz.
So it’s no stretch to assume companies will protect their IP,
And that’s where our story takes shape—
with a patented stretchy T.

In Atlanta and in New York right now, matters are unfolding,
Between two shapewear giants and design patents they’re holding.
On one side is Heather Thomson and her brand Yummie Tummie.

On the other is Sara Blakely, owner of Spanx,
The legendary label for which every celebrity gives thanks.
Blakely’s also telegenic, often appearing on air,
And on magazine covers, recently as Forbes’ youngest, self-made female billionaire.

At issue here are three Spanx garments made to manage the midsection,
The designs of which Yummie Tummie claims infringe its patented tank-top invention.
Who will win this battle of the bulge?
Only time will divulge.

This isn’t the first time Yummie Tummie has exercised its IP might.
In 2011, it secured a $6.75 million settlement against Maidenform Brands in another infringement fight.
Yummie Tummie has sent other cease-and-desist letters, says its lawyer, NYC Strook partner Steven Pokotilow.
But, he says, every other issue has been resolved … until now.

Yummie Tummie sent Spanx a letter in January 2013, and the lawyers were discussing actively,
When Spanx filed its declaratory judgment motion in Atlanta quite suddenly.
Pokotilow vowed to pursue Yummie Tummie’s claims aggressively in court,
And in April he filed an infringement suit against Spanx in New York—the ultimate retort.

(What were Spanx’s lawyers at King & Spalding thinking? We have only our imagination,
For the firm’s policy, says its media rep, is not to comment on pending litigation.)

Meanwhile, Thomson shared her anger at Blakely by posting on Yummie Tummie’s website an open letter,
Wishing that her fellow entrepreneur had behaved a bit better.
Instead of ceasing to infringe, “you’ve chosen to sue us, no doubt thinking your massive company could intimidate ours,” she wrote.
Her assertion that “Yummie Tummie will not just endure through this offensive lawsuit; we will prevail” seemed more a promise than a gloat.

However this heated dispute ends, its chance of creating new precedence is slim.
But professor H. Brian Holland of Texas Wesleyan School of Law says it will be interesting despite the win.
The personalities, the product and the reality TV angle make it irresistible to the public, he insists.
But lawyers will appreciate the case’s procedural twists.

For Spanx utilized a new standard for declaratory judgments that the Supreme Court put in place,
In its 2007 ruling in the MedImmune Inc. v. Genentech Inc. patent case.
Accordingly, the Spanx suit will become part of the growing body of law surrounding the high court’s ruling,
And definitely an entertaining read for associates, clerks and those immersed in law schooling.

This poem concludes with a plea from those women who rely on shapewear,
To fit into their white pants, slim tops and dresses from Hervé Léger.
O’ judges, be you wise so an appeals court doesn’t have to determine that,
Your judgments make everyone look fat.