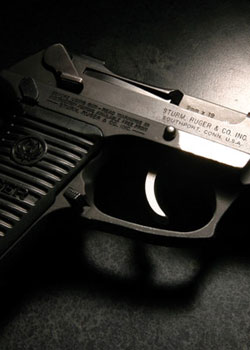 Despite numerous challenges to local, state and federal gun laws, few have been successful. (Photo by Ed Murray/Star Ledger/Corbis)

In two landmark cases since 2008 the U.S. Supreme Court prepped the firing line to shoot down handgun control laws. In District of Columbia v. Heller, the high court held that the Second Amendment protects the right of an individual to possess a firearm for private use inside the home. The case involved not a state, but a federal enclave. Two years later, in McDonald v. Chicago, the Supreme Court followed up the decision by applying Heller to states.

Proponents hailed Heller and McDonald as setbacks for gun control advocates. They predicted a shift in gun policy throughout the country.

But so far it hasn’t happened that way. While there have been challenges throughout the country to local, state and federal gun laws, few have been successful.

In fact, critics of the decisions say the cases have failed to provide a concrete framework to help lower courts determine the constitutionality of challenged gun control laws.

“It’s a huge change in our understanding of the amendment, but not necessarily a huge change in what kinds of gun control laws are constitutional,” says Duke University assistant law professor Joseph Blocher.

“There’s a lot to be fleshed out. The court in Heller almost hits the reset button on the Second Amendment. Now, we need to figure out again what’s OK and what’s not OK.”

At least 260 challenges to state and federal gun laws have been filed since Heller was decided, according to Jonathan E. Lowy, director of the legal action project at the Washington, D.C.-based Brady Center to Prevent Gun Violence.

“There have been challenges to virtually every gun control [law],” says Adam Winkler, a constitutional law professor at UCLA. “The one thing that unites most of these cases is that the challenged gun control law is upheld.”

Federal courts have already rejected challenges to felon-in-possession laws, for example, and to restrictions on concealed weapons.

Gun control and gun rights advocates are tracking the progress of a few noteworthy cases, such as Bateman v. Perdue, a challenge to North Carolina’s law forbidding the carrying of firearms or ammunition during an official state of emergency.

Another case potentially heading to the Supreme Court is Nordyke v. King, involving a county ban on firearms on public property. In April 2009 a panel from the 9th U.S. Circuit Court of Appeals at San Francisco found the ban constitutional. This October the court held another hearing on the issues, based on the McDonald ruling.

Some cases have yet to reach a court ruling. In September, for example, a Texas teen challenged the section of the federal Gun Control Act of 1968 prohibiting the sale of handguns or ammunition to anyone under 21 in D’Cruz v. Bureau of Alcohol, Tobacco, Firearms and Explosives.

Chris W. Cox, executive director of the National Rifle Association’s Institute for Legislative Action, said in a statement about the lawsuit: “In Heller and McDonald, the U.S. Supreme Court clearly stated that the Second Amendment guarantees a fundamental, individual right to keep and bear arms for all law-abiding Americans. That right is not limited only to Americans 21 years of age and older. Indeed, through out our nation’s history, adults beginning at age 18 have served in the military and fought for this country with honor.”

For years, gun rights advocates had been looking to challenge the Firearms Control Regulations Act of 1975. The law restricted residents of the District of Columbia from owning handguns, with some limited exceptions. It also required that all firearms, including rifles and shotguns, be kept either unloaded and disassembled or locked.

The act was considered one of the strictest gun con trol laws in the country, according to Nelson Lund, a constitutional law professor at George Mason University School of Law. “It was a severe infringement of the right protected by the Second Amendment.”

But part of the problem, judges and experts say, is how to interpret part of the Heller majority opinion written by Justice Antonin Scalia.

In a 5-4 ruling, Scalia said the Second Amendment protects the individual unconnected with militia service to use firearms for such purposes as self-defense in the home.

Yet Scalia wrote that the Second Amendment is not unlimited: “Nothing in our opinion should be taken to cast doubt on the long-standing prohibitions on the possession of firearms by felons and the mentally ill, or laws forbidding the carrying of firearms in sensitive places such as schools and government buildings, or laws imposing conditions and qualifications on the commercial sale of arms.”

That contention opened the firing range for all sorts of exceptions.

“The ruling really goes out of its way to reassure others that they don’t have to worry about people packing heat in courtrooms or other public places,” says Sanford Levinson, a constitutional law scholar at the University of Texas at Austin. “The one thing you can say with confidence is that you have a right to have a handgun in your home, but it’s not clear that you can have it in your car or when you go to dinner.”

Judges, too, have wondered whether the Heller statement should be treated as law or downgraded to obiter dicta. “There is some dispute over whether the language from Heller limiting the scope of the Second Amendment is dicta,” said Judge Anthony J. Scirica of the 3rd U.S. Circuit Court of Appeals at Philadelphia. In July the court upheld the federal law that punishes removal of a gun’s serial number.

Scirica said in United States v. Marzzarella, “Heller did not purport to fully define all the contours of the Second Amendment, … and accordingly, much of the scope of the right remains unsettled.”

In criticizing Heller, Blocher says Scalia used a categorical or formula-driven approach rather than the balancing test that was formerly used. In a 2009 New York University Law Review article, “Categoricalism and Balancing in First and Second Amendment Analysis,” Blocher adds that Scalia failed to identify underlying values to help lower courts understand how to apply the new approach when facing challenges to new laws.

Since the Supreme Court in Heller failed to articulate a clear standard of review, lower courts have had to wing it, say Winkler and other constitutional law scholars.

“Some courts have applied strict scrutiny, some have applied intermediate scrutiny, and many have just avoided the question altogether,” says Winkler. “There has been wide disagreement on the proper standard or tests the courts should apply.”

Despite Scalia’s wording, gun control advocates worried that a slew of gun restrictions would soon be eviscerated in the wake of Heller. In June, the Supreme Court ruled in McDonald that people in state and local jurisdictions have the same right to protect their homes with a gun.

The McDonald case involved a Chicago ban on handguns. However, both Chicago and the District of Columbia have responded by simply adopting new gun laws that still restrict licensing for the possession of firearms, but not to the extent of an outright ban on ownership. In March, Judge Ricardo M. Urbina of the U.S. District Court for the District of Columbia upheld the new restrictions in Washington.

“These cities have continued with relatively restrictive licensing,” Winkler says. “It’s possible challenges to their new laws might go up to the Supreme Court, although it’s hard to know whether the court would then want to take it.”

There are still opportunities for the Supreme Court to expand its ruling in Heller, or, at the very least, provide more guidance. For example, both McDonald and Heller involved cases of laws restricting gun possession inside the home. Winkler points out that the high court has yet to rule on whether individuals have the right to defend themselves outside the home.

But Lund advises not to expect any new guidance from the court anytime soon. “The Supreme Court’s practice ordinarily after major decisions like this is to allow the issues to percolate in the lower courts,” he says. “I don’t know of any reason to expect the court to depart from that practice.”