And Then There Was None 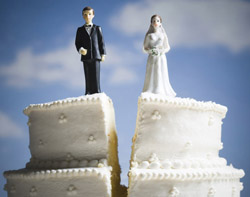 After then-California Gov. Ronald Reagan signed into law the country’s first no-fault divorce law in 1969, the concept spread quickly across the United States to everywhere but New York.

Now, as New York falls in line with the rest of the country—Gov. David Patterson signed the state’s no-fault law in August, and its provisions took effect in September—we take a look back at a legal concept that has been both celebrated and pilloried for its effect on the institution of marriage in the United States.

1917—The Bolshevik Revolution is credited with introducing the first no-fault divorces. Changes in Russian law after the October Revolution made marriage and divorce secular and allowed a marriage to be annulled when either one or both of the individuals applied for an annulment.

AT LEAST WE’RE NOT NEW YORK

1985—South Dakota is the second-to-last state to adopt no-fault divorce.

1996—The Michigan legislature considers a bill to revoke no-fault divorce in situations where one party opposes the divorce. It fails.

1997—Louisiana amends its no-fault divorce law. Couples can enter into a “contract marriage” that terminates the union after a six-month separation. Or they can choose a “covenant marriage” that is dissolved only by a two-year separation or proof of fault.

1998—The Michigan legislature again considers a bill to amend its no-fault divorce law.

2004—Pennsylvania amends its no-fault divorce law to allow a marriage to be legally terminated in as little as 90 days.

2010—A Michigan state senator introduces another bill to repeal no-fault divorce when the couple has children or one party objects.