Are private education programs for shoplifters a second chance or extortion? 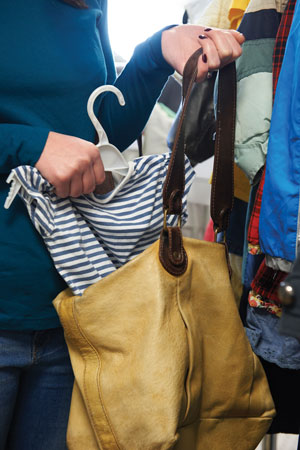 Debra Black was accused of stealing about $6 worth of goods from a Goodwill store.

Black, a quadriplegic in her early 60s, claims she didn’t intend to steal. She says she hung a child’s purse and other items from the arm of her wheelchair so she could use her hands, and forgot about them as she left the store in Orange County, California.

A security guard brought her back inside and accused her of shoplifting.

Retailers don’t usually prosecute such small thefts. But according to Black, the guard “interrogated and intimidated” her into signing up for a private online educational program run by the Corrective Education Co., based in Orem, Utah. At $400 (reduced from $500), the CEC course cost 66 times the value of the items.

Black agreed at the scene to enroll—but never completed the program. According to her lawyer, Christina Sosa of Potter Handy in San Diego, Black agreed to enter the program only because she felt bullied by the guard’s threats to call the police. Black didn’t make the $100 payments, even as CEC sent debt-collection letters threatening to turn her over to police. Black responded by suing the company for debt-collection violations.

Black’s lawsuit was ultimately dismissed, and her claims of coercion were not heard. But in November, the San Francisco City Attorney’s Office filed an unrelated suit against CEC for extortion, unfair business practices and more. It alleges that the company uses the threat of prosecution and misleading statements to pressure suspects into paying. CEC denied all the allegations in its answer filed last December.

Shoplifting is a massive problem for retailers, who lose $13 billion a year to theft. They get only limited help from the criminal justice system because shoplifting is considered a minor crime.

That’s why some national retailers have turned to private companies like CEC and a competitor, Turning Point Justice, based in Draper, Utah. The companies tout their programs as a win for everyone: Offenders avoid a conviction, retailers get the crime addressed and law enforcement can focus on more serious offenses.

But some observers are skeptical. They worry that suspects could, like Black, feel pressured into signing up even if they aren’t guilty. And because the programs are outside the criminal justice system, skeptics say they could ensnare innocent people without due process.

Retailers don’t like to call the police on shoplifters. Because law enforcement prioritizes more serious crimes, officers may not show up for hours after a shoplifting call. During that time, retail employees must wait with the suspect, which takes them away from their primary duties. If suspects believe they were mistreated while being detained, retailers can be sued.

Police don’t like getting those calls either. CEC officials declined to speak to the ABA Journal after the lawsuit was filed against the company, but before the suit, CEO Darrell Huntsman said sending two officers and a squad car costs about $2,000. If the store calls police too often, it can even be penalized; the mayor of Beech Grove, Indiana, declared the local Wal-Mart a public nuisance last year, meaning it could be fined for more calls.

Both CEC and Turning Point Justice say they solve those problems to everyone’s benefit. The companies are based on principles of restorative justice—a collaborative process in which offenders sit down with victims and the community to discuss how to make amends. The idea is part of some American Indian justice systems and has been adopted in other courts.

Mary Louise Frampton, a professor of law and social justice at the University of California at Berkeley, says restorative justice is cooperative rather than adversarial.

“You’re looking at the person who offended, the victim and often the community in sort of a shared decision-making about how to make things right,” says Frampton, who teaches restorative justice.

TPJ and CEC apply those concepts in what could be considered private diversion programs. Participants must be first-time offenders, sober at apprehension and not clearly involved in organized crime. Eligible suspects are shown a short video about the program, and then asked to choose between signing up or conventional prosecution.

Those who sign up complete an online course that’s intended to make them examine why they shoplifted and why it’s a bad choice. They pay restitution for their thefts and foot the bill for the courses; the companies can provide financial aid. CEC’s program also offers telephone-based coaching and a “life skills” component teaching participants how to build things like a resume or a nutrition plan.

The companies say their results are promising. Lohra Miller, CEO of Turning Point Justice, says it’s too early for a reliable recidivism study, but TPJ is helping retailers cut their calls to police by 50 to 60 percent. Huntsman said retailers using CEC cut those calls by 30 to 70 percent, and also spend 85 percent less employee time dealing with offenders. Over 18 months, he said, fewer than 5 percent of CEC program participants have shoplifted again.

Both companies say they have safeguards against coercion of suspects. They use videos to ensure that everyone apprehended hears the same message about the course and their choices, which could prevent allegations of unequal treatment. Both tell viewers not to sign up if they’ve been wrongly accused. They also give potential students time to make up their minds: 72 hours for TPJ and 48 for CEC. Huntsman said in August that students can drop out and get a refund anytime.

“This is not meant to be a high-pressure type of situation,” he said.

The San Francisco City Attorney’s Office disagrees. Its lawsuit alleges that CEC requires students to sign a confession in a “highly coercive” situation: directly after being apprehended, in an isolated room, with limited time to make the choice and a security guard threatening to call police. The initial video is full of false and misleading statements, the lawsuit says. If students don’t pay, the suit alleges, the company threatens to give the confession to police.

The lawsuit notes that CEC pays its clients for enrolling students—some are paid per enrollee—which it says creates an incentive to pressure innocent people into enrolling.

For example, she once had a client—a minor—accused of shoplifting items worth less than $20. The client’s friend was holding the items, and it wasn’t clear that her client knew about it. But the store stopped everyone, Della-Piana says, and both the store and the private company called her client’s mother, saying they’d prosecute if she didn’t pay for the program.

“They didn’t have $300, but they believed that their child would be in jail if they didn’t come up with it,” says Della-Piana, now legal director at the Lawyers’ Committee for Civil Rights of the San Francisco Bay Area. “And that wasn’t the case. The DA was not going to prosecute this case with dubious evidence against a minor for a $20 thing that he didn’t have.”

Megan E. Ryan, former supervising attorney of the East Bay Community Law Center’s consumer protection program, saw accused shoplifters at the center’s clinic. Almost everyone she’s met who had a letter from CEC ended up agreeing to pay, she says, “because they feel like there’s no other choice.”

“Their understanding has been … that they are either going to have an interaction with the criminal justice system or they’re going to pay the money for the class,” says Ryan, now an attorney with Goldstein, Borgen, Dardarian & Ho in Oakland, California. “And legally, that’s extortion. You can’t say to somebody: ‘We’re going to press criminal charges unless you pay this money.’ “

Frampton, the Berkeley professor, says the program does not sound like a model for restorative justice. “One of the basic principles of restorative justice is the consent of all the parties,” she says. “As I understand it, what this program is doing sounds to me very coercive.”

This article originally appeared in the June 2016 issue of the ABA Journal with this headline: “Retail Justice: Are private education programs for shoplifters a second chance—or extortion?”