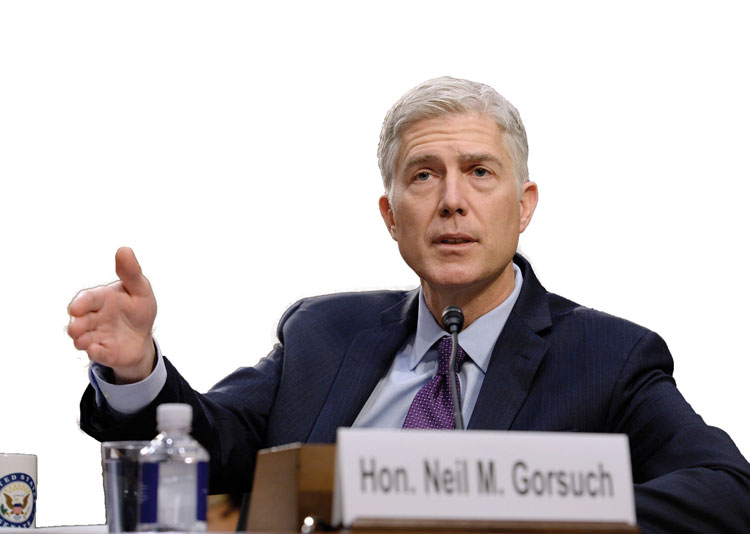 As the U.S. Supreme Court enters June—the traditional month for wrapping up its term—legal observers have much to anticipate. There are potential landmark decisions coming on a range of controversial issues. Speculation continues about a potential vacancy on the bench due to retirement. And many are looking forward to getting a fuller picture of where the newest member of the court, Justice Neil M. Gorsuch, stands at the end of his first full term.

Of course, that doesn’t mean observers have been withholding their assessments of President Donald J. Trump’s first Supreme Court nominee—both at the time of Gorsuch’s anniversary on April 10 and in the weeks that followed. Conservatives have generally been pleased with what they have seen, while liberals say their concerns have been confirmed.

“What you’re seeing in terms of Justice Gorsuch’s work product is pretty much what the president said he was seeking for the court, and pretty much what Neil Gorsuch represented himself to be in his confirmation hearing,” says Leonard Leo, executive vice president of the Federalist Society and an outside adviser to the White House on potential Supreme Court nominations.

Kristen Clarke, president and executive director of the National Lawyers’ Committee for Civil Rights Under Law, an advocacy group that raised concerns about the nomination, notes that while some may say the verdict is still out, there’s much evidence over the past year suggesting that Gorsuch is deeply aligned with Justice Clarence Thomas, considered by many measures and observers to be the court’s most conservative member.

Clarke says that despite some recent instances of Gorsuch voting differently from his colleague, “at the end of the day, I think that the verdict is clear: This is a judge who is very much of the Justice Thomas ilk.”

Gorsuch participated in 13 cases during the court’s last month of arguments in April 2017. In those, and in the new term that began last October, he attracted attention for several reasons: his frequency of writing, including numerous separate dissents; a perception that he was, at times, addressing his new colleagues in a lecturing tone; and for a writing style that some observers consider overwrought.

In Gorsuch’s very first dissent, there was an example of the lecturing tone. In an arcane case involving the proper forum for review in an employment discrimination case, he suggested that courts should confine themselves to the text of the statute at issue, even when it presents a difficult result.

“If a statute needs repair, there’s a constitutionally prescribed way to do it. It’s called legislation,” Gorsuch wrote for himself and Thomas in the dissent to the 7-2 decision in Perry v. Merit Systems Protection Board.

Meanwhile, Gorsuch’s tendency to overexplain things in opinions (such as when he was on the 10th U.S. Circuit Court of Appeals at Denver and clumsily explicated his use in one opinion of a Groucho Marx line about elephants wearing pajamas) drew the spotlight. Daniel Epps, co-host of the popular First Mondays podcast, came up with the Twitter hashtag #GorsuchStyle, and participants sought to rewrite famous Supreme Court passages the way the new justice might.

By the time of his anniversary as a justice, Gorsuch’s performance on the bench and his writing continued to please his conservative supporters. But on April 17, a week after that milestone, a Gorsuch concurrence elicited a more mixed reaction.

Gorsuch joined the court’s four liberal justices in a judgment that struck down as unconstitutionally vague part of a federal law that has been used to deport non-U.S. citizens who commit felonies.

The case involved a native of the Philippines and lawful permanent U.S. resident whose convictions for residential burglary made him eligible for deportation under a catchall provision of a federal immigration statute. Kagan wrote for the court that the section of the Immigration and Nationality Act at issue was so “fuzzy” about which type of aggravated felony requires deportation as to violate the due process clause.

Before the American Revolution, he continued, the crime of treason in English law was so widely construed that “the mere expression of disfavored opinions could invite transportation or death,” and the founders of this country “cited the crown’s abuse of ‘pretended’ crimes like this as one of their reasons for revolution.”

“Today’s vague laws may not be as invidious,” the justice wrote, “but they can invite the exercise of arbitrary power all the same—by leaving the people in the dark about what the law demands and allowing prosecutors and courts to make it up.”

This article was published in the June 2018 issue of the ABA Journal with the title "Assessing Gorsuch: After a year on the court, observers say the newest justice has been mostly predictable, but upcoming decisions will paint a fuller picture."

Next:
Texas county experiments with allowing indigent clients to choose their own lawyers