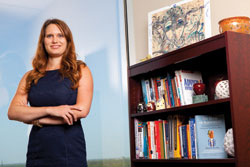 While many lawyers have taken to the yoga mat for stress relief and health benefits, yoga takes center stage in all aspects of Scheel’s life, including her role as a lawyer. A certified yoga teacher who recently practiced law in an office space that doubled as a yoga studio, Scheel says she approaches the practice of law the same way she falls into a yoga pose—with a mixture of effort and release.

“If you have too much ease and softness, that would reduce the impact. And too much effort could cause overexertion,” says Scheel, 33, who discovered yoga while studying for the Texas bar exam in 2004. “It’s about finding the right balance.”

Scheel didn’t always feel so at peace with the law. Like many associates who found themselves in the nation’s “unhappiest job” according to an early 2013 survey, Scheel started her career in positions that “looked like what a lawyer should be doing,” but left her unfulfilled. She spent time summarizing depositions at a medium-size defense firm, then tried a smaller medical litigation firm in hopes that greater client access would make her happier.

When it didn’t, she pursued a position outside of the law, which led to an opportunity with an international oil and gas services company. During five years in that job, Scheel was encouraged to take vacation time and pursue work-life balance. She started a yoga instructor training course, which transformed her.

“It allowed me to grow up and become a more whole being,” she says, “and to recover from law school.”

During yoga teacher training, Scheel met a psychotherapist who eventually became a business partner. Though reluctant to leave a coveted in-house job, the entrepreneurial road beckoned, and Scheel and her friend decided to set up shop in a building that housed their professional practices and a yoga studio they jointly owned.

“The alignment felt good to grow my law practice and share yoga while I was running a business and advising businesses,” Scheel says. “It was all very parallel, all in harmony.”

Scheel believes her efforts to grow as a yoga practitioner have made her a better lawyer, particularly in how she relates to clients. She has met with a regular meditation group and even attended a silent retreat. The experiences have helped her cultivate empathy, she says, which helps her identify emotions that her clients are experiencing but can’t always articulate.

“I often say the same things to my clients and yoga students,” Scheel explains. “Using empathy can help pull them out of hopelessness.”

The biggest reward, Scheel says, is when clients have remarked that they leave her office feeling better than when they came in, much like her yoga students. “That connection with humanity, harmony and happiness—a lot of people would say that’s rarely part of a lawyer’s work,” she says, “but we are right in it.”

Scheel recently made another transition, deciding she couldn’t manage two full-time jobs as her yoga studio and law practice grew simultaneously. She left the yoga studio/law office and joined a law school friend at a small firm, but still teaches hatha yoga classes each week.

“Where I’m at with the question of what it means to be a lawyer and yoga teacher is a message of power,” Scheel says. “This yoga thing is clearly essential to who I am and why I’m effective, but it’s the cherry on the top of being an excellent lawyer.

“Yoga class is as important as research on Westlaw. Yoga makes me more effective with clients and judges and everyone I encounter.”