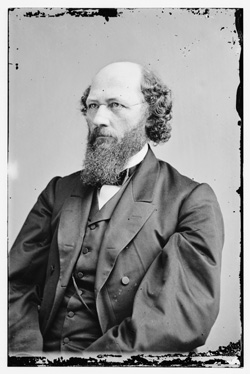 In 1859, Stephen J. Field replaced David Terry as California’s chief justice, when Terry resigned to engage Sen. David Broderick in a duel. Terry prevailed on “the field of honor” and joined the Confederate Army in 1863, the same year Field was appointed to the U.S. Supreme Court. Their paths would cross, most fatefully, more than two decades later in a convoluted legal saga that began with an adultery charge against former Nevada Sen. William Sharon.

Sarah Althea Hill claimed to have a signed marriage contract with the silver magnate, which she sought to validate in a California state court. Sharon admitted Hill had been a mistress, but claimed in federal court that the contract was a forgery, part of a fraudulent scheme to obtain a lucrative, bogus divorce. The litigation dragged on for seven years, during which time Sharon died and Terry married the tempestuous Hill, whose legal team he had joined. A California court initially upheld the contract, but Hill didn’t fare as well on the federal side.

In September 1888, a three-judge federal panel, which included Justice Field on circuit, ruled in a suit brought by Sharon’s heirs. As Field read the opinion, which included an order to surrender the alleged contract, Hill-Terry launched into a tirade. When marshals attempted to remove her, Terry took robust exception and a violent brawl ensued. While in jail for contempt, the Terrys continued to threaten Field and he was assigned federal protection.

On Aug. 14, 1889, Field (back on circuit) was traveling to San Francisco when, unknown to him, the Terrys boarded the same train. David Terry confronted Field as he was taking a meal at the Lathrop station, cuffing him twice in the face. U.S. Marshal David Neagle, who had been assigned to protect Field, feared Terry was reaching for a knife and shot him dead. Field was charged with murder, but the charges were quickly dropped. Neagle’s case proved more complicated and was ultimately decided by the Supreme Court.

In the end, the Hill-Sharon marriage contract was declared a fraud and Sarah Hill-Terry spent the last decades of her life in a state mental institution. Field’s tenure on the court, the second longest in history, ended with his retirement in 1897, two years before his death.