Back to the Big Easy: ABA to Hold Its First Major Post-Katrina Meeting in New Orleans 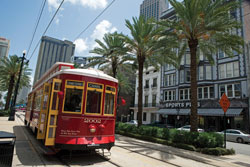 On Feb. 1, the ABA will convene one of its two major associationwide meetings in New Orleans for the first time since the 1994 ABA Annual Meeting.

The 2006 midyear meeting had been scheduled for New Orleans, but Hurricane Katrina abruptly changed those plans in August 2005. The devastation, primarily from flooding, forced the ABA to move that meeting to Chicago.

ABA President Wm. T. (Bill) Robinson III thinks the association’s return to the Crescent City for the 2012 midyear meeting, which officially ends Feb. 7, will send an important message to the lawyers and other residents of a city that still is rebuilding more than six years after Katrina.

“In returning to New Orleans, we hope the ABA will demonstrate its continuing respect for the resiliency of the residents to recover from one disaster to the next,” Robinson says. “These are talented, courageous people, and their spirit of recovery is admirable.”

But the U.S. legal profession also has learned important lessons about how to respond to disasters such as Katrina and the 2010 BP oil spill in the Gulf of Mexico, says Robinson, the member in charge of the Florence, Ky., office of Frost Brown Todd. “Primarily as a result of the catastrophes in New Orleans, the ABA has undertaken disaster recovery initiatives that will benefit communities and lawyers throughout the country,” Robinson says.

The midyear meeting will be the first major gathering during 2012 of the ABA’s key leadership entities, along with some sections and other groups. (The annual meeting will be held in Chicago Aug. 2-7.) The policymaking House of Delegates will hold sessions during the midyear meeting, along with the Board of Governors and the Nominating Committee, which will announce its choice for a president-elect nominee.

Among other events, two public hearings on key ethics issues for lawyers and judges will be held in New Orleans. On Feb. 2, the Commission on Ethics 20/20 will hold its first hearing since releasing a discussion paper that sets out possible recommendations on the question of whether nonlawyers should be allowed to have a limited ownership stake in law firms. The commission will hear comments on that issue and other topics that it will bring to the House of Delegates starting in August.

On Feb. 3, the Standing Committee on Ethics and Professional Responsibility will hold a hearing on proposals to amend provisions in the ABA Model Code of Judicial Conduct that relate to judicial disqualifications.

For Robinson, the midyear meeting promises to be one of the busiest weeks so far in his one-year term as ABA president. The midyear also is roughly the halfway point of his term, but Robinson declines to engage in any midterm self-assessment. “I will let others decide what my accomplishments have been,” he says.

Robinson instead emphasizes that his policy priorities “begin and end with the crisis of underfunding for courts across the country.” He notes that 47 states have experienced funding reductions in just the past two years, according to the National Center for State Courts, and most states already allocate less than 2 percent of their budgets for the courts.

But Robinson and other bar leaders have made headway recently in their relentless efforts to focus attention on the financial plight of the courts. He notes that the ABA and the U.S. Chamber of Commerce worked together to develop a joint opinion piece calling for adequate court funding that was expected to be published in USA Today early in the year.

“It’s important that we’ve been able to awaken awareness of the public, including the media, to the crisis,” Robinson says. “That’s the key to finding solutions.”

After all, he says, “this issue isn’t so much about judges and lawyers as it is about the public’s access to justice.”