According to the National Association for Law Placement, the overall employment rate for new law school graduates is the lowest it has been since 1994, when the rate was 84.7 percent.

In commentary accompanying its report Employment for the Class of 2011—Selected Findings, NALP Executive Director James Leipold said, “For members of the class of 2011, caught as they were in the worst of the recession, … the entry-level job market can only be described as brutal.”

Immediately after that, those brutal statistics turned downright torturous. The ABA Section of Legal Education and Admissions to the Bar released its employment data for the 2011 class, showing that about half of 2011 grads got full-time lawyer jobs. And for those who had hopes of a major-firm paycheck to recover from tuition shock, the news was even worse: Less than one-tenth got hired by law firms with 251 or more lawyers.

• Data excerpts from: NALP’s Employment for the Class of 2011—Selected Findings and the ABA Section of Legal Education and Admissions to the Bar’s 2011 data. 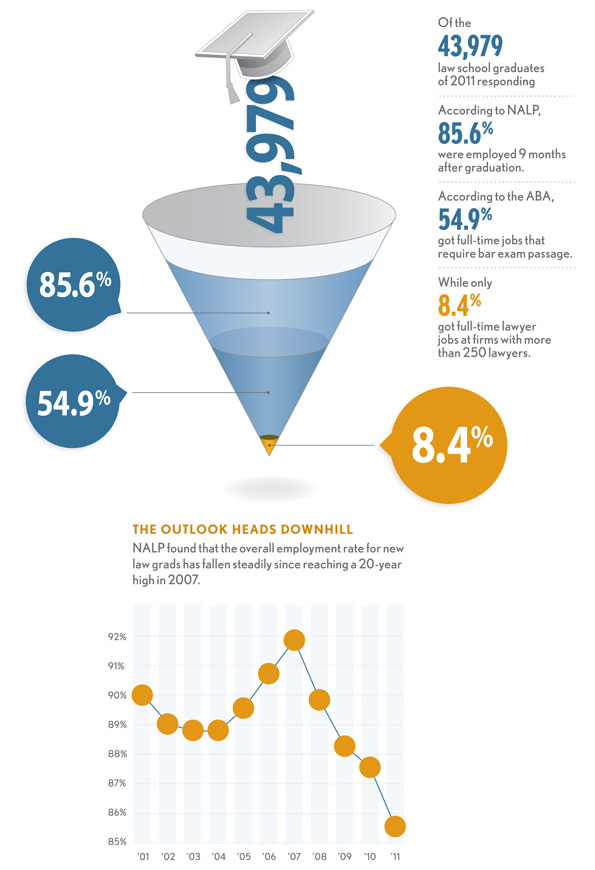