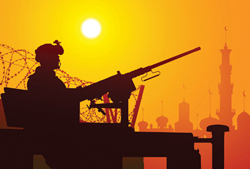 Tom Donovan’s firm seems to be perched on the rim of the apoca­lypse. Sandstorms can turn the noonday sky black and knock out the law firm’s connection to a communications satellite. Routine trips outside of Bagh­dad’s International Zone require a security escort to the tune of $6,000 a day.

But Donovan, a partner at the Iraq Law Alliance, couldn’t see himself working any other place. “It is a practice less ordinary. It is such uncharted territory. You put your foot forward” into the unknown all the time.

The ILA is believed to be the only American law firm operating in Iraq, and business is good, according to Donovan.

An Egyptian and an Iraqi lawyer started the firm in 2003 because they foresaw great opportunity. As the firm’s business grew and became increasingly Western, Donovan and other U.S. lawyers were brought in and the founders left the firm. It reorganized last year as an American-chartered firm for business reasons.

The 12-lawyer ILA now serves as outside counsel for a mix of private cli­ents; it also serves as local counsel for U.S. law firms. “A lot of our [law firm] clients come to us sometimes with very ordinary questions that in New York, for example, a lawyer would have no problem answering,” Donovan says. “But in Iraq no one knows the answer.”

While Iraqi law is based on the French legal system, Donovan says there is little precedent for the deals that Western businesses are now doing there. For example, a joint venture with partners contributing a variety of capital, property and goodwill—while common in the United States—is still a novelty in Iraq.

Much of the ILA’s work involves going to local ministries in Baghdad or Erbil to get direction from the government on how to accomplish the deal. “It’s a lot of chasing tails,” Donovan says.

Houston lawyer Andrew Fono of Haynes and Boone frequently works with the ILA. Even the simplest legal task is difficult in Iraq. “A U.S. company can’t incorporate itself online to do business in Iraq,” Fono says. “Incorporation requires several assemblages of documents that must be hand-carried to several ministries.

The ILA also provides Western firms and businesses with a comfort level. Donovan says that Iraq is filled with a host of “shady characters” claim­ing to be lawyers, but who may not be. His firm’s lawyers—they come from the U.S., Europe, Iraq and New Zealand—are licensed and abide by the ethical constraints of their home jurisdiction. They also keep client trust accounts in U.S. banks.

That doesn’t mean living and work­ing in Iraq is safe for the lawyers. Donovan and his colleagues are on the move constantly. They rotate offices every six weeks between Bagh­dad, Erbil and the United States. When in Iraq they rent work/residence villas that they share with a security company. Com­munications are encrypted and client documents are kept in the U.S.

The firm also has a contingency fund. Says Donovan: “We made a list of warning signs. If those things happen, we agreed we won’t stay, hoping things improve. We’ll use the contingency fund to escape Iraq.”