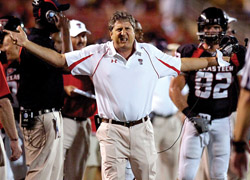 In the lucrative arena of collegiate sports, coaches are paid to negotiate a field stacked with tough-to-tackle hazards: losing seasons, player misbehavior or even their own questionable antics. When the team lost, coaches used to pack their bags and slip out of the locker room after quietly negotiating a contract settlement. Now, however, more fired coaches are scrambling to court with high-profile lawsuits that embroil universities in protracted legal battles that are endlessly scrutinized by media, fans and alumni.

“I think you’ll see more of a trend toward litigation,” says Robert Lattinville, a partner with Stinson Morrison Hecker in St. Louis who chairs the firm’s sports law practice group. “That college coach is a CEO of a multimillion-dollar corporation. In many respects, he or she has gotten their experience on the field or the court. They’re handed the keys and they’re not experienced with employment matters.”

Some coaches also aren’t experienced with changing perceptions of what constitutes abuse of players. Ten or 15 years ago, coaches could slap players on the head, grab them by the throat or berate them after a bad play without the university or anyone else paying much attention, says Gary Roberts, dean and professor at Indana University School of Law in Indianapolis and an expert on sports law. Now the YouTube age of instant media saturation has upped the ante.

“I think universities are being more aggressive in punishing this type of behavior,” Roberts says. “It’s been a fairly recent phenomenon where you see a number of coaches getting fired for misconduct and the universities terminating the contract and not paying the balance.”

Former Texas Tech football coach Mike Leach was fired last December amid allegations that he ordered a player with a concussion be confined in a dark space for hours during practice. Leach has denied any wrongdoing and claims the university wanted to avoid paying him an $800,000 bonus that was due on his five-year, $12.7 million contract. A state district judge upheld Leach’s breach-of-contract claim in June but dismissed the remaining claims in his suit after Texas Tech argued it had sovereign immunity.

Former South Florida football coach Jim Leavitt filed a breach-of-contract suit in March. He was fired after being accused of slapping and grabbing a player by the throat during halftime at a home game. Leavitt is seeking more than $7 million left on his contract.

Lattinville says some fired coaches may be emboldened to sue because of the success of former Ohio State basketball coach Jim O’Brien. He was fired in 2004 after admitting he lent $6,000 to a Serbian recruit, which triggered severe NCAA violations and a three-year probation for the Buckeyes. Nevertheless, an Ohio Court of Claims judge ruled that the university didn’t follow the conditions of O’Brien’s contract before firing him and awarded him more than $2.2 million in damages. The ruling was upheld on appeal.

With millions of dollars riding on collegiate sports deals for media rights, sponsorships and merchandising, coaches can be fired not only for a losing season but for a lukewarm one, says Terence High, a sports attorney and agent in Ridgeland, Miss., who represents a college coach and several NFL players.

“Coaches are on the short leash,” he says. “You’re dealing with egos not only from the coaches but from the athletic administration side, as well as some of the donors who write the big checks.”

Sometimes those personality clashes can undo a coach. Former Seton Hall University basketball coach Bobby Gonzalez was fired for cause in March, which led to the filing of a federal breach-of-contract lawsuit a month later. Gonzalez had received seven technical fouls during his last season and was known for clashing with referees, university administrators and his own players. It didn’t help that one player was involved in a wrong-way traffic crash and another faced felony charges for allegedly robbing eight people at gunpoint at a home in South Orange, N.J.

Neither coaches nor colleges are showing much loyalty these days, with many coaches viewing themselves as free agents while schools are quick to pull the trigger for even a whiff of scandal, says Michael McCann, a Vermont Law School professor who is a legal analyst and online columnist for Sports Illustrated.

“I think we’ve seen more of a litigious approach in recent years,” McCann says. “I don’t know if it’s going to get worse, but it’s not going to get better as long as so many dollars are at stake and coaches and institutions are willing to part with each other with less reservation.”

Sometimes a fired coach is angry and doesn’t consider the mark that a lawsuit will leave on his career, says Mike Cleary, executive director of the National Association of Collegiate Directors of Athletics.

“It’s going to hang over his head as he goes on to his next job,” Cleary says. “Everybody is going to remember he caused problems at school A or school B, and they’re going to ask themselves whether they really need him to win. That’s just human nature.”

Fired coaches often turn to agents and sports attorneys who encourage lawsuits because they can profit from litigation, Cleary says. “I think it’s just the times,” he says. “People operate in different ways these days.”

McCann says a good attorney will do what is best for the client, and litigation doesn’t necessarily mean that a coach will be blacklisted. “The more we see lawsuits occur, the less of a stigma is associated with it,” he says.

Some fired coaches also have filed suits claiming discrimination over race, gender or whistle-blowing, but those claims are much more difficult to prove than a straightforward breach-of-contract claim, says Lattin ville with Stinson Morrison Hecker.

Former Savannah State University football coach Bobby Wells filed a federal race discrimination lawsuit in May, claiming he was forced to resign because he is white. Wells claims that administrators told him alumni at the historically black school would never support him. Wells also claims the university wouldn’t recruit five high school players because they are white.

Former Montana State women’s basketball coach Robin Potera-Haskins testified in April in her federal sex discrimination suit over her firing in 2004 amid allegations she had mistreated players. Potera-Haskins claims she was terminated because she complained about unequal treatment for men’s and women’s teams at the university.

Binghamton University basketball coach Kevin Broadus filed a racial discrimination complaint in March with the New York State Division of Human Rights. He was suspended last year after some NCAA violations and the dismissal of six players for criminal charges or other misbehavior.

Many universities are adding more specific termination clauses to employment contracts in hopes of avoiding litigation down the road if a coach is fired for abusive behavior or other misconduct, Roberts says.

“If you don’t have [the clauses] in there,” he says, “you have to go on some general notion of immoral behavior and it makes defending the termination much more difficult.”

Litigation can mar not only a coach’s career but also a university’s image as they fight over million-dollar contracts while the athletes themselves are paid nothing but the cost of their education. “It makes college sports seem more about money than education,” McCann says. “It’s hard to know if that is a fair accusation.”

The Congressional Budget Office released a report last year that questioned whether university athletic departments that earn millions through advertising and media deals should still receive tax-exempt status. “Such large [commercial] sums raise the questions of whether those sports programs have become side businesses for schools,” the report stated.

However, the report found that revoking tax preferences for collegiate sports programs most likely would not produce much tax revenue because universities would still have “considerable opportunity to shift revenue, costs or both between their taxed and untaxed sectors.”

Meanwhile, devoted fans keep watching from the sidelines while the contentious legal battles and tit-for-tat accusations distract attention from the game.

“I think the fans are disgusted,” Lattinville says, “and deservedly so.”