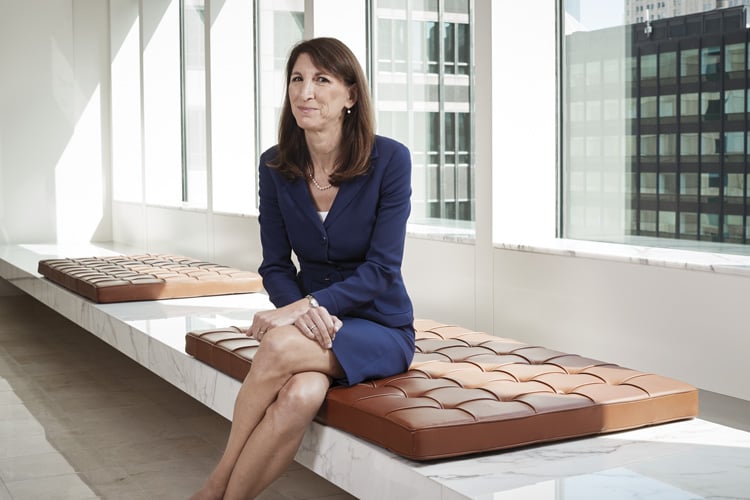 Laura Martin: “I want to institutionalize some of the things that made me successful.” Photo by Saverio Truglia.

TOP DOWN, BOTTOM UP

One universal theme is that commitment and support from the top are necessary to support women’s advancement. Firms must continually assess the metrics, along with the money and the resources they’re devoting to cultivate diverse attorneys.

Men as allies are absolutely critical to progress in the profession, advocates say, in an “if you’re not part of the solution, you’re part of the problem” way. As long as firm rainmakers, who almost always are men, continue to pass their books of business to other male attorneys, they will perpetuate the cycle that keeps women out of power.

Roger Furey, chair of Katten Muchin Rosenman and a partner in the intellectual property practice in Washington, D.C., understands this dynamic and recognizes the challenge. With decades in practice and years of experience on diversity teams, Furey is working to build on the progress Katten has made so far.

“I am 100 percent convinced clients want and deserve diversity from their legal advisers,” Furey says. “All the research shows a diversity of view is for the betterment of our institution and our clients. It makes sense to me on every level, and it’s kind of intuitive for me.

“We’ve done training on unconscious or implicit bias, and there’s no doubt on anyone’s mind that it exists with respect to diverse and female attorneys, as in any industry. You have to work very hard because it’s so challenging to succeed at diversity because of the way our institutions are set up. It’s not going to be corrected without people paying attention to it.”

At Katten’s Chicago office, partner Laura Martin, who is on the executive committee, chairs the women’s leadership forum. She’s also developed a national mentoring panel for women to reach out to one another for career guidance. Katten has been on 10 Best Law Firms lists, which is every year a list has been issued.

Martin says women made up only one-third of law school classes when she graduated, and all her mentors were men. But she benefited from partners who took an interest in making sure she got exciting career opportunities early on. Martin wants to ensure that other women aren’t left behind.

“At this point in my career I want to give back,” Martin says. “I’ve been lucky with mentors, etc., and I want to institutionalize some of the things that made me successful. People gave me an opportunity to shine, taking me to pitch meetings, introducing me to clients. I demonstrated early on I was able and willing to do these things.”

In addition to the women’s forum, Furey says, Katten has a sponsorship program that targets diverse attorneys and has solid representation of women on key firm committees, ranging from 22 to 25 percent.

According to the National Association of Women Lawyers, women on leadership and management teams are a key metric. Typically, women are under-represented on compensation committees in BigLaw. But evidence shows that law firms with more women at the table have narrower gender pay gaps.

Despite the lower pay, when comparing the median hours worked by female partners, the numbers are startling. The NAWL reported that women worked 2,224 median hours yearly, compared to 2,198 for men; yet women earned less.

Furey says that he is aware of the disparities, and that Katten is working on the pipeline. A firm committee monitors the progress of diverse midlevel and senior associates with a “laserlike focus” to ensure they’re with the firm for the long run.

“This isn’t just a ‘check the box,’ ” Furey says. “It’s something we need to do to get our firm to where we need to get to, so we can be the best at this.” 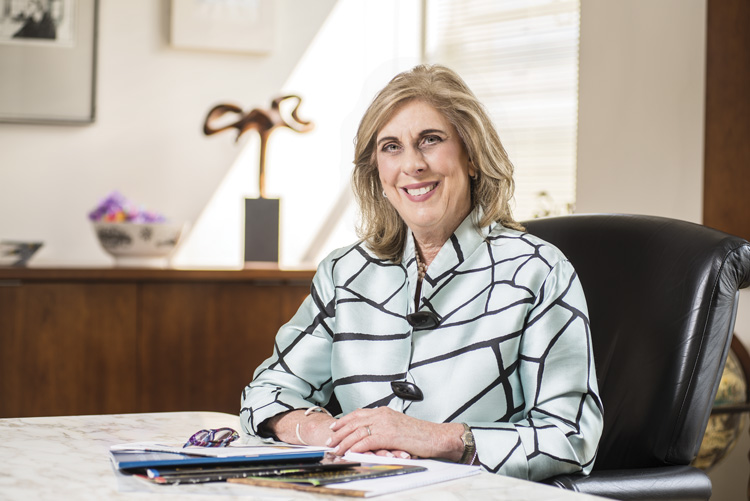 Roberta Liebenberg: “Clients are really demanding not just women in the pipeline but senior women, first-chair trial lawyers, leads on the deal.” Photo by David Fonda.

Lawyers and law firms love lists. The affinity starts in law school, where rankings and competitions are part of the culture. Afterward, there are lists that crown super-lawyers and those that categorize firms into top 200, 100 or even 50. If a firm makes the right list, it can mean a lot. Or it could mean nothing at all. Some say the idea of “best law firms for women” is an oxymoron in a climate in which progress is measured in fractions of a percentage point.

“I’m ambivalent about all of these lists,” says Liebenberg, a two-time former chair of the ABA Commission on Women in the Profession. “It’s an easy metric, and firms can feel like ‘We’ve won this and we’re done; check that off.’ Firms see it as a marketing advantage, which is good if they become convinced that it’s important to ensure women lawyers are advancing and succeeding.

“A lot of times these reports are self-reports; the firm submits them. For lawyers thinking about going to these firms, the important metric is how many are equity partners, the composition of women on really important committees like management and compensation. Those are the real hallmarks of how you’re going to see real progress for women in law firms.”

Those were the types of data points labor and employment partner Samantha Grant investigated when she was looking to make a lateral move this past spring. A member of the ABA women’s commission and vice-chair of the Section of Labor and Employment Law, Grant selected Sheppard, Mullin, Richter & Hampton after doing some due diligence. She looked for female-friendly policies and diversity—and inclusion at the top.

Sheppard Mullin didn’t participate in this year’s Best Law Firms survey. But it has before and plans to in the future, says diversity and inclusion manager Carol Ross-Burnett. She says the firm culled best practices information from the survey to further its own gender initiatives.

“Sheppard Mullin was recommended to me, by a mentor, because of how much the firm is doing to make the environment as inclusive as possible,” says Grant, who works out of the Century City office in Los Angeles. The firm, she adds, has “done studies on women in the workplace: what causes them to stay, what causes them to leave … to make sure the firm is as inclusive as it can be.”

Grant says her firm is working to give female, racially diverse and LGBTQ attorneys a seat at the table through sponsorship programs and policies to help them develop more business. This sort of track record, on paper and in practice, sealed the deal for Grant.

When Grant joined the firm April 28, she became the fourth African-American, female labor and employment partner in the firm’s two LA offices.

“I looked at the fact that a great number of practice group and committee chairs were women lawyers,” Grant adds. “I also saw that almost 50 percent of the elected members of the executive and compensation committees were women—that was noteworthy and important to me.”

Pamela Berman, a partner at Bowditch & Dewey in its Boston office, says these kinds of data points are more important than lists, which can give a false snapshot when interpreted alone. Berman argues that a statistically neutral picture of what it means to be an equity partner is needed before firms can be categorized as great places for women.

“Let’s have one definition—profit per partner for purposes of revenue,” which is something firms are unwilling to disclose, Berman says. “That’s more proof in the pudding than saying ‘We have a lot of women in the firm; we promote them; it’s a great place for women and minorities.’ Is it? Do you really consider them your equal when you’re paying them at the bottom of the scale? It’s distorting statistics.”

Berman also questions whether women at the “best” firms are being represented on management committees in significant-enough numbers to have influence, and whether they have titles without compensation. But Michele Coleman Mayes, immediate-past chair of the ABA women’s commission, says that in the legal field, competition can sometimes be enough to effect change. “If the platform is large enough to get noticed, it’s sparking competition among [firms]. They don’t want to be upstaged or at the bottom of the bar,” she says.

“That is genuine, and it might cause real change because they’re concerned with what the Joneses are doing. I have frequently thought: How do you get people to compete? Because in this country, competition changes behavior.”