Mayes also hopes firms will use the women’s commission’s new toolkit that promotes transparency in the compensation process, so women know the salary range for their level and practice group and whether they’re being paid fairly.

According to a January report from the Commission on Women in the Profession, women make up 36 percent of the legal profession. Their representation across partnership ranks at major U.S. law firms averages 22.1 percent, according to the latest National Association for Law Placement study, despite gender parity in graduating classes during the past two decades.

Dismal as these numbers seem, they are worse for minority women—African-American lawyers in particular. In 2016, women-of-color attorneys composed 7.2 percent of total lawyers at major U.S. law firms and 2.8 percent of partners.

At the highest compensation level, equity partnership, the representation of women has been fairly stagnant for a decade. NALP’s latest data shows that in 2016, 18.1 percent of equity partners were women. Law firms on Working Mother Media’s list average 20 percent female equity partners.

“That is better than the national average, but only by a little,” Kaplowitz says. “That says there is room for improvement. Another interesting data point we’ve learned this year is that women are advancing faster in single-tier law firms than in two-tiered firms.”

On the Best Law Firms list, 40 percent of equity promotions in one-tier firms went to women last year. In two-tier firms, 32 percent went to women. But according to the NAWL, the compensation gap between men and women is growing, with the average female equity partner earning 80 percent less than her male counterpart—4 percentage points less than a decade earlier. 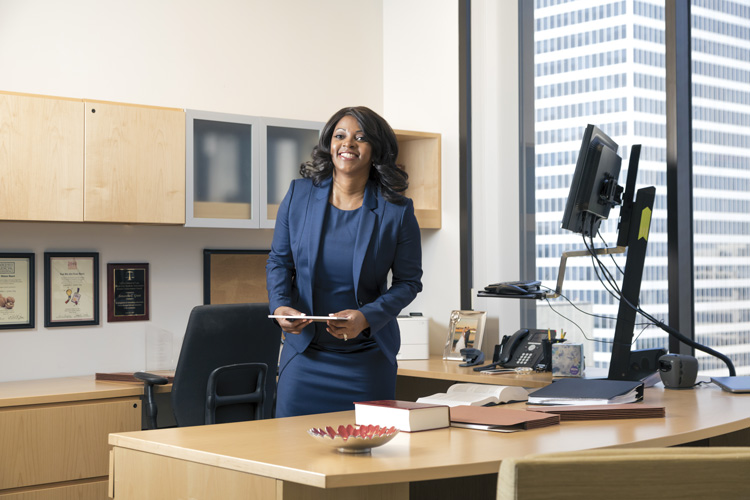 Samantha Grant: A mentor recommended her new firm for being “as inclusive as possible.” Photo by Jeff Berting.

“As depressing as the stats may be, it’s a different environment than it used to be, thankfully,” says Bonnie MacNaughton, a partner in the litigation practice group at Davis Wright Tremaine in Seattle and chair of its women’s affinity group.

“It’s changed a lot since I started as an associate in 1982. Back then, I looked around the firm I worked at, and there were no women who had kids across any practice group. Not one. I didn’t see anyone who looked like me working there. Not one person. It became clear to me that my path was elsewhere. But since then, things have changed a lot.”

MacNaughton moved to Davis Wright after working in-house at Microsoft. The firm has been on the Best Law Firms for Women list for four years in a row.

“This is definitely, if not unique, certainly one of the rare law firms that allow people to pursue really interesting careers and a quality of life that is more balanced than most places,” MacNaughton says. “It’s really important to women but also important to our male colleagues here.”

MacNaughton says her firm provides a multifaceted approach to support women in their career and personal lives, with the goal that they “can’t imagine being anywhere else.”

She says that, like most firms, Davis Wright has more women in the younger and midlevel range than the higher range, particularly in the litigation department. But she says the firm is working hard to adjust the imbalances.

“The trick for us, and other firms, is the retention of women lawyers,” MacNaughton says.

Liebenberg is part of a team investigating that topic through one of ABA President Hilarie Bass’ initiatives, Achieving Long-Term Careers for Women in Law. The team is examining the issue and how senior female attorneys are faring at law firms. Liebenberg points to data showing that in firms only 27 percent of lawyers 50 and older are women.

“If you want to see if you’re going to be successful as a young woman lawyer, look and see if there’s a strong corps of senior women lawyers,” Liebenberg says. “That’s probably the best predictor of success.”

One engine for change that might advance the retention and continued success of female attorneys is the corporate law department. Many general counsels, fed up with the snail’s pace of diversity progress, are changing their approach to awarding business. As companies increasingly seek to tap into a global market and reflect a diverse society internally, they are expecting the same results from outside counsels and are using the power of the purse to get them. “I’ve always thought it had to be an economic-based change,” Berman of Bowditch & Dewey says. “I didn’t think firms would change as long as the people making the money—the men—didn’t think there was an economic reason to change.”

A wealth of research demonstrates that diversity benefits the bottom line. According to a study by market research company Acritas, law firms that provide “very diverse teams” of lawyers tend to receive a 25 percent greater share of legal spending than nondiverse teams, making the business case for diversity hard to ignore.

But many wonder how it’s possible that a business case for diversity has to be made at all, decades after female lawyers have been successfully working alongside men and doing the same jobs—often for less pay.

Since the resolution passed, more than 70 companies have co-signed to support the initiative, putting heat on outside counsels by requiring diverse teams and leads, as well as concrete data on diversity efforts. (See “How Can GCs Be a Force for Change?”, about a panel on diversity at this year’s annual meeting.)

“One of the trends we’re now seeing is clients are becoming more demanding and don’t want just lip service to diversity,” says Kaplowitz, the special adviser to the Best Law Firms initiative. “The more clients demand this, the more it will matter to law firms.”

The general counsels acknowledge that change won’t happen overnight. But many have pledged to keep the pressure on until it does. At the law firm level, some women have already noticed a difference.

“Clients are really demanding not just women in the pipeline but senior women, first-chair trial lawyers, leads on the deal—and if you don’t have these at your firm, it will be to a great disadvantage,” says Liebenberg.

It’s easy to be cynical when women have been fighting the same battle for equality during the course of two separate centuries, with nominal advances to show for it. But some of the trends—larger summer associate classes, a focus on explicit and implicit bias training, and general counsels’ focus on diversity—are offering a glimmer of hope.

“There is still lots and lots of work to be done, but it is getting better,” Cooper of Sidley Austin says. “Sometimes I get discouraged, but then I think about when I started—how few female partners there were, how many had kids, how many were working reduced hours. Looking back 15 to 20 years, yes we’ve made progress. But is it where we thought we’d be 20 years out? Probably not,” she says.

“I have a 9-year-old daughter; my friends have daughters; we talk about where will they be when they’re at a firm. We’re very conscious. We’re trying to make a path for female associates here—but also for our daughters.”