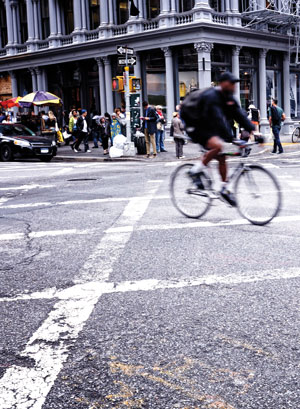 Bike commuting in big cities increased 71 percent in recent years, and 50,000 cyclists were injured in car crashes in 2014. iStock Photo.

Tim Panagis was out for a Sunday morning bike ride with friends in rural Michigan last year when a state trooper drove up behind the cyclists traveling two abreast. This is legal in Michigan, but the officer used his PA system to instruct them to go single file. The four riders complied and Panagis tried to wave the officer by. He was pulled over instead. The trooper said Panagis’ gesture suggested he was being a “smart aleck,” and he issued a citation for impeding traffic and riding outside the white line separating the soft shoulder from the road.

Panagis, a 27-year-old Ford Motor Co. engineer from Ann Arbor and experienced cyclist, decided to fight the $200 ticket. He says he was riding legally, there was no other traffic and conditions were clear. “I felt like I was wronged; I was really offended,” Panagis says.

The incident became a cause célèbre in the cycling world. A blog post including the trooper’s dashboard camera video received more than 200,000 views and became an example of the frustration over the often misunderstood world of cycling laws.

Cycling enthusiasts say that such traffic citations spring from officers’ misunderstandings about how rules of the road apply to those on bikes. Friction can also occur if cyclists are forced to navigate roads not designed to accommodate them. And then there are drivers who accuse cyclists of riding recklessly, hotdogging in traffic, and forcing motorists and pedestrians to maneuver to avoid collisions.

These kinds of clashes are likely to intensify. More cities are embracing bike-share programs, thus adding riders to the roads. And the country’s largest cities have seen the percentage of cycle commuters increase 71 percent from 2007 to 2013, according to the Alliance for Biking & Walking. There are more cars on the road too: The auto industry research firm IHS Automotive reported light vehicle registrations hit a record 258 million last year.

And the clashes can be deadly. On July 2, a 35-year-old man riding in a bike lane in Brooklyn was killed by a hit-and-run driver, making him the 12th cyclist fatality in New York City this year. Some speculated that the driver intentionally hit him. Bicycle advocates complained that police responded by ticketing cyclists for running red lights and handing out bicycle safety pamphlets. Across the country, the number of bicyclists killed has fluctuated from a high of 786 in 2005 to a low of 623 in 2010. In 2014, the latest year for which statistics were available, 726 cyclists were killed and 50,000 were injured in motor vehicle traffic crashes, according to the U.S. Department of Transportation.

In Columbus, Ohio, a float in a Fourth of July parade known for its anything-goes vibe sparked anger on social media for being crafted to look like an SUV that had hit a cyclist. A twisted bicycle was attached to the hood and a pair of stuffed pants protruded from the open sun roof. A sign on the car read: “I’ll share the road when you follow the rules.”

Cycling laws vary from state to state. In Idaho, with its wide-open spaces and population of just 1.6 million, the rules are somewhat relaxed. Cyclists are allowed to yield rather than stop at stop signs, and can briefly stop at a red light and continue if traffic is clear.

In the city of San Francisco, with a population of about 800,000 in less than 50 square miles, the law is stricter. Cyclists are regularly ticketed for rolling through stop signs at busy intersections. Biking in the city, as measured at 19 in-tersections, increased 184 percent between 2006 and 2015, according to the San Francisco Municipal Transportation Agency.

The growing number of bike riders there has created tension with police. During the summer of 2015, police cracked down on cyclists rolling through stop signs. Frustrated cyclists protested by slowing traffic with a single-file line of 100 riders. Attempts to change the law have been stymied. An ordinance nicknamed the “Idaho Stop Law,” which would allow cyclists to use rolling stops when it’s safe, was vetoed this past January by Mayor Ed Lee.

Other proposed bills around the country purport to enhance bike safety through new laws. In Missouri, one lawmaker was pushing a measure requiring bicyclists to attach a 15-foot-tall pole with a flag on it to their bike if they ride on county roads. In South Dakota, a bill would have had cyclists pull to the side of the road and stop if a faster vehicle came up behind them on a road with a limited shoulder or no shoulder.

The mishmash of bike laws and lack of understanding them prompted Charleston, South Carolina, attorney and competitive cyclist Peter Wilborn to create Bike Law, a network of attorneys who work with clients involved in bike crashes and other cycling disputes.

A childhood fan of the cycling movie Breaking Away, Wilborn became interested in bike-only cases after his brother was killed by an underage driver while cycling in Wyoming. Wilborn came to realize there was a lack of understanding of cycling culture among lawyers, even those representing riders. He gradually shifted his practice toward cycling cases and found he was getting calls from around the country. He’s since assembled a group of lawyers in 20-plus states and Canada. “I wanted to find a like-minded group: Good humans and good lawyers who love to ride bikes,” he says. Wilborn and his colleagues gather on Google Chat twice a month to discuss cases, exchange strategies, share expert witnesses and talk about best practices with police.

One of those lawyers, Decatur, Georgia, attorney Bruce Hagen, made it his mission to educate local law enforcement. He visits police stations to pass out copies of the Georgia Bicycle Law Enforcement Pocket Guide. Hagen says he gets mixed reactions when he speaks at information sessions. “There are folks who are interested in learning about it, folks who are interested because they had to be and folks who are hostile to it,” he says.

Cities and towns are gradually adjusting to having more bikes on the roads. Atlanta is relatively new to the cycling culture and plans to unveil a bike-share program. Becky Katz, Atlanta’s chief bicycle officer, says the city already has painted bike lanes on streets, the quickest way to encourage a separation of people-powered and motor vehicle traffic. And it has created some partially protected lanes with raised curbs separating autos and bikes.

“We want to bring more balance to the streets,” says Katz, whose position was created in late 2015. “Whatever mode we’re moving in is the one we feel entitled to in that moment.”

Still, she’s convinced that cycling can make a dent in Atlanta’s notoriously gnarly traffic. “Change is hard, projects can be challenging, and everyone wants to know how these changes will affect [their] commute,” Katz says.

When Atlanta decided to join the bike-share movement and turn a car-driven city into a more mixed-transportation city, it looked to Austin, Texas. Laura Dierenfield, the Active Transportation Program manager there, says with limited road space, Austin was challenged by designing a system that allows people to ride safely and within the law. “When you improve predictability for everyone, everyone is safer and happier,” she says. For example, she points to traffic signals at biker’s-eye level and bike boxes on the road that position cyclists to be in a driver’s sight at stop lights, allowing them to clear out quickly when the light changes.

Chicago has a long-range plan to make the city more friendly to cyclists and al-ready has created 200 miles of on-street protected, buffered and shared bike lanes. The Chicago Streets for Cycling Plan calls for eventually having a 645-mile network of safe routes throughout the city. Police have tried strategic enforcement at busy intersections and have pulled over cyclists and motorists. But instead of giving tickets, travelers are usually schooled on the rules of the road.

Jason Jenkins, education specialist for the Chicago-based Active Transportation Alliance, says that while bike lanes provide a measure of safety, it’s up to cyclists to know and follow the laws, too. “We all have responsibilities, and we all have certain rights on the roadways,” he says.

Michigan cyclist Panagis was adamant that he was within his rights on that Sunday morning when he and his friends were pulled over. He eventually contacted Bike Law to help him fight the ticket. The police dash-cam video helped tell the whole story.

“When I first saw the video, I assumed the prosecutor would just dismiss the case,” says Bryan Waldman of the Sinas Dramis Law Firm, a Lansing, Michigan-based Bike Law attorney who represented Panagis.

A Livingston County District court judge found Panagis guilty but he went on to appeal the ruling to the Livingston County Circuit Court. The judge there wondered aloud why anyone would appeal a civil infraction and called the appellate brief on the case “a $10,000 brief for a $200 ticket.”

In the end, the judge found in Panagis’ favor and ordered the case dismissed with prejudice. The cyclist’s takeaway: “Know the rules of the road, respect them and be nice.”

This article originally appeared in the August 2016 issue of the ABA Journal with this headline: “Wheels of Justice: Widespread confusion over the rules of the road for bicyclists leads to clashes.”