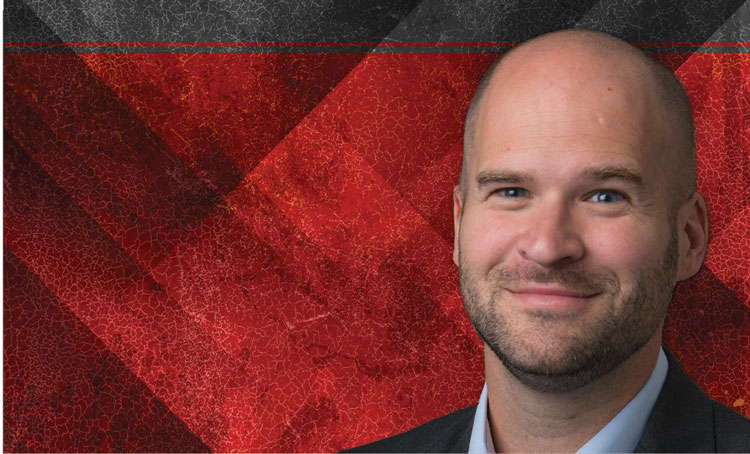 Aaron Wright: “The technology has the potential to make a dent and improve people’s lives, and the only way that’s going to happen is if we have these conversations.” Photo courtesy of Cardozo School of Law; foxaon1987/Shutterstock.com

But some BigLaw firms have gone further. Over the past 2½ years, several of the largest firms in the world have joined legal working groups aimed at bringing crypto and blockchain attorneys together to share information, learn from one another, and help craft best practices.

“We can achieve more together by sharing and by grappling with these questions together as a group, hearing each person out, than we can wrestling with things alone,” says Joshua Ashley Klayman, formerly with Morrison & Foerster in New York City, who in late June launched her own firm and a blockchain consultancy business, Inflection Point Blockchain Advisors.

Blockchain technology stores records on multiple “nodes” in a network of computers that communicate and capture changes in sync. Blockchain data is more secure because rather than tampering with one record on one computer, a hacker would have to change that record on every single node—in the process burning computer power to solve a math equation posed by the blockchain’s algorithm—which would be nearly impossible.

Klayman chairs the Wall Street Blockchain Alliance Legal Industry Working Group, which formed in 2016 and was one of the earliest on the scene. It’s like a community, says Klayman, who leads biweekly, in-person meetings of lawyers from BigLaw firms such as Debevoise & Plimpton, McDermott Will & Emery and Polsinelli. “Some have been able to develop relationships that have led to teaming on deals, led to us writing things together—whether articles or thought pieces—and led to better advice,” she says.

Discussions cover blockchain tech in general and don’t favor one blockchain over another. Referrals for paid legal representation are common among the lawyers in the group, and membership is open and free, Klayman says.

Also popping up in 2016 was the Digital Currency & Ledger Defense Coalition, whose members include Am Law firms like K&L Gates and Sidley Austin. It provides pro bono representation to crypto and blockchain defendants and files amicus briefs in cases that could set precedent.

“We’ve raised issues that otherwise wouldn’t be raised with courts in some of the most important decisions in the country,” says Brian Klein, the coalition’s founder and board chairman and a partner at Baker Marquart in Los Angeles.

For example, the coalition filed an amicus brief in Florida v. Espinoza in January, which involves a defendant who sold bitcoins in 2014 to undercover agents who indicated they planned to buy stolen credit-card numbers with the bitcoins.

But the 11th Judicial Circuit of Florida found in 2016 that bitcoins didn’t count as money under Florida law and dismissed defendant Michell Espinoza’s charges of money laundering and illegal money transmission. The state has appealed in Florida’s 3rd District Court of Appeal, and the Digital Currency & Ledger Defense Coalition argues the appellate court should affirm the trial court’s ruling.

The coalition also has chimed in about United States v. Coinbase in the U.S. District Court for the Northern District of California. The IRS sought records in 2016 on Coinbase users who transferred bitcoins between 2013 and 2015 because it suspected the users were underreporting their virtual assets. Coinbase fought the request.

The coalition argued in an August 2017 amicus brief the IRS was “fishing with dynamite” and its request was overly broad. In February, the court narrowed the request of the IRS somewhat, ordering Coinbase to provide records on at least 13,000 users who had at least $20,000 in cryptocurrency transactions between 2013 and 2015.

The Wall Street group and the digital defense coalition have been joined by the Enterprise Ethereum Alliance’s Legal Industry Working Group, which started last summer, and enterprise software company R3’s Legal Center of Excellence, which launched in February.

Aaron Wright, chairman of the Legal Industry Working Group, says there’s a great benefit to lawyers involved because they’re talking through cutting-edge legal issues at a very high level, gathering perspectives from their peers, and taking home the best advice they can find for their clients.

“The technology has the potential to make a dent and improve people’s lives, and the only way that’s going to happen is if we have these conversations,” says Wright, a professor at Yeshiva University’s law school.

Wright says his group has 30 law firms as members, including Am Law firms Cooley, Jones Day, and Latham & Watkins, and that members pay annual dues, ranging from $3,000 to $25,000, depending on the organization’s size.

The alliance is divided into subcommittees of anywhere from 10 to 70 lawyers to discuss topics such as best practices for smart contracts, privacy concerns, intellectual property issues, blockchain governance and tax matters. Wright says some of the subcommittees will be issuing reports on their research topics, while others are working on product demos.

Just as Wright’s group covers only one blockchain, R3’s Legal Center of Excellence focuses solely on the Corda. However, while the other legal blockchain groups are nonprofits focused on open-source platforms, R3 is a for-profit company, and Corda is proprietary software that runs on a private blockchain platform.

R3 clients—mainly financial institutions—already work with BigLaw firms that make up the center’s 13 members, including Baker McKenzie, Clifford Chance and Crowell & Moring. R3 wanted those lawyers to learn about its platform to better advise their clients, says Jason Rozovsky, senior counsel at R3 and head of the legal center.

“We’re moving into a phase where there are pilots launching and real value being moved and real change happening to how people do business,” Rozovsky says. “There are real novel legal issues the technology raises across a variety of industries.”

This article was published in the August 2018 ABA Journal magazine with the title "Chain Reaction: BigLaw firms are working together with the goal of influencing how blockchain technology and smart contracts will operate in the future."