Bilingual lawyers have a leg up in many niche practice groups 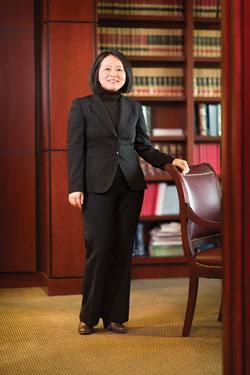 Letao Qin: Beijing bilingual is advantageous because “there is increasing collaboration between lawyers from different countries.” Photo by Bruce Deboer.

Lawyers looking for a leg up in hiring might consider talking the talk of foreign language.

According to a survey commissioned by Robert Half Legal, 42 percent of 200 lawyers who are hiring officers see a need for more bilingual attorneys. Most needed (88 percent of those who saw a need) were Spanish-speaking attorneys, while Chinese-speaking skills ranked second at 9 percent.

Many universities dropped foreign language study as an entry requirement once American English became the default tongue in business and other fields. But the need for personal contact and trust makes both language skill and cultural understanding important in professions like law.

The Spanish for Lawyers program includes training in not only the language but also the subtleties of speech where the meanings of words and their usage may be different for different countries. “It would be the same as saying that English words are used the same in the U.S., the U.K. and Australia,” Cooper says, “which of course is not true.”

Understanding the uses of language in foreign cultures is more involved than translating words. “It’s learning another legal culture,” Cooper says. “For example, people in Latin American countries don’t have the same trust of law enforcement officials because there is a lot of corruption, so people don’t feel as comfortable reporting crimes.”

While Robert Half Legal cited international business dealings as the main driver of bilingual capabilities, some firms are including bilingual attorneys as part of a marketing strategy to attract non-English-speaking clientele.

The Locks Law Firm in Philadelphia has about 25 attorneys and specializes in mass tort, asbestos, personal injury and product liability cases. According to managing partner Michael Leh, the firm has one lawyer who speaks Portuguese, one who speaks Spanish and one who speaks Mandarin Chinese.

“We have a partner who was hired for entirely different reasons but who is fluent in Portuguese,” Leh explains. “It’s a fortunate happenstance; he married a Brazilian woman and as a result became fluent. We were able to attract cases in the Portuguese-speaking community and market ourselves in Portuguese publications, and so it became a nice niche for us. We wanted to have at least one Spanish-speaking attorney as well, and Mandarin works out the same way.”

Leh says having bilingual attorneys on staff “allows us to handle cases for clients for whom English is not the primary language. Clients like it when their lawyer speaks [their] language.”

If non-English-speaking clients are required to complete forms as part of their representation, Leh says, they can complete the forms in the language in which they are fluent, knowing that the bilingual attorney can translate as they speak. He estimates that 10-20 percent of his clientele are non-English speakers. Leh doesn’t believe a foreign language capability should be required for law school graduates to practice, but he says being bilingual is increasingly important as the non-English-speaking segment of the population continues to grow.

Letao Qin is an associate at Coats & Bennett, an intellectual property firm in Cary, N.C. Qin, a native of China, holds a doctorate in astrophysics from Montana State University and a JD from Boston College Law School. She specializes in patent law.

“Given that economic globalization is happening around the world, we see many cross-border litigations and patent prosecutions and lots of international filings,” she says. “There is increasing collaboration between lawyers from different countries.”

If a U.S.-trained lawyer wished to become trained in Chinese, Qin says which dialect to choose would depend on where one worked. “It would be Mandarin for mainland China, but in Hong Kong the better choice would be Cantonese. Taiwan has a different version of Mandarin, but the writing is more complicated.”

Qin says a new learner could start out with a popular computerized language program, but spending six months in China would be better “if they’re serious.”

Being bilingual makes one more sensitive to differences in culture and imparts a “flexible mindset,” Qin adds. “Asian people are generally more polite but might still want you to do something, which Americans may tend to look at as a preference.”

Asked whether law students will be required to be bilingual in the future, Cooper says, “The market will do the dictating. If you want to prosper and serve your community, the marketplace will demand it. It’s all about marketing.”