Bitcoin's blockchain technology being used in business, finance and contracts 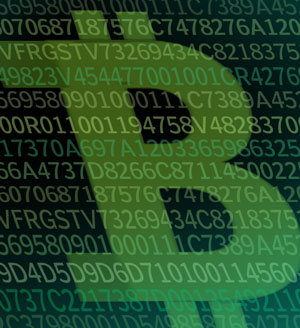 For many people, their introduction to the digital currency bitcoin came when federal agents shut down online black market Silk Road. The notorious website where users could indulge in all sorts of illicit activities—including drug trafficking, prostitution and hiring a hitman—landed its founder in prison for the rest of his life and gave bitcoin a horrendous reputation that it still hasn't shaken.

Yet the underlying technology behind bitcoin, known as blockchain, is being used by a growing number of companies, banks and financial institutions, and it could fundamentally change the legal industry in the coming years.

“Bitcoin was like Napster in a lot of ways,” says John Alber, a former Bryan Cave partner now known as a “practical futurist” for the International Legal Technology Association. “Napster was used for illicit means, but it brought attention to the power of peer-to-peer file sharing. Bitcoin has an unsavory reputation because of Silk Road, but many, many people have seen the value of the underlying technology.”

What makes blockchain so valuable and adaptable to new, innovative services is that its central concept is fairly basic. “The simple answer is that blockchain is really just a ledger,” says Dax Hansen, an electronic financial services partner at Perkins Coie. “Historically, ledgers have been centralized where one party keeps track of everything. The innovation with blockchain is that all interested parties run copies of the ledger and contribute to it and add entries to the ledger in a systematic way. That way, the ledger is decentralized, but in a way that’s transparent and immutable.”

While bitcoin is a relatively recent phenomenon, blockchain is old news and has been around since the 1990s. It wasn’t really used for much until bitcoin came around, Alber says. Now many financial tech companies are using blockchain, and nearly every major bank is investing in it.

Nasdaq has started using blockchain applications, including Linq, a new platform for measuring shares of private companies, which debuted in late October. “There are many, many angel investors and venture capitalists that are beginning to work in this area,” says Alber. “Mostly, it’s thriving outside of the legal industry.”

Because of its recording capabilities, blockchain can be used to create smart contracts that are self-enforcing.

Ethereum, the leading blockchain-based platform for smart contracts, is crowd-sourced and was formally launched in late July 2015. The platform uses what it calls “next generation bitcoins” (aka ethers) as its digital currency, and it can be used to create agreements so that parties will only get paid if they fulfill certain obligations.

Ethereum eliminates ambiguities and potential areas of confusion so that each party is kept aware of its obligations.

“Agreements are ambiguous. And enforcement is hard,” the website EtherScripter, an Ethereum-based smart contract-generation platform, states. “Ethereum solves both these problems. It does this with the marriage of two special ingredients: a digital currency and a complete programming language.”

“The government of Honduras is one of the first countries using blockchain to record real estate transactions,” Alber says. In countries where notaries perform many legal services, particularly in South and Central America, he says, blockchain could take on a lot of those tasks.

Law firms, however, have yet to embrace blockchain for internal matters like time-keeping, billing or financial transactions. Hansen is confident that will change.

“Lawyers use ledgers,” Hansen says. “If you use a ledger for something, then there’s a use for blockchain.”

“If everyone wrote their contracts in blockchain, then you probably wouldn’t need a system like ours for newly executed agreements,” he says. “Even if that were to happen, companies would still have plenty of legacy contracts that would need to have their data extrapolated, and that’s where we would come in.”

Waisberg says he’s skeptical about whether smart contracts will catch on. “Many times, a dispute arises because of an unforeseen or unanticipated event,” he says. “I don’t see how contracts as code would be any different.”

Even blockchain proponents caution that there are limits to what smart contracts can do. “I think they’ll always be somewhat limited,” Hansen says. “Would you buy a house based on a smart contract? Probably not. But would you buy something on Amazon where you’d agree to release money only after the delivery drone crosses a certain point? Maybe.”

This article originally appeared in the March 2016 issue of the ABA Journal with this headline: “Bitcoin’s Useful Backbone: Blockchain technology gains use in business, finance and contracts.”