Bone of Contention: Pets Get Caught in the Middle When Relationships Go to the Dogs 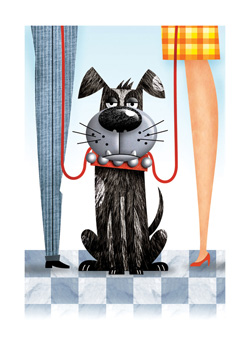 OK, answer truthfully: Have you ever bought your pet a birthday gift? Do you carry on conversations with your pet, referring to yourself as “Mommy” or “Daddy”?

It’s possible that you need to get out more, or maybe you’re just one of the many who treat their critters as sons and daughters who never talk back or need help with homework.

Our furry and feathered friends are always there for us and give us unconditional love. In return, we tend to anthropomorphize them and consider them as much a part of the family as their human counterparts. So when a marriage (or civil union or domestic partnership) dissolves, often both parties will fight to retain custody of Rex or Tabby, as if they were actual children.

In a 2006 survey of members of the American Academy of Matrimonial Lawyers, nearly 25 percent reported seeing an increase in pet custody disputes. Because of this new reality, some courts have tried to address the situation by making arrangements similar to those used in cases of child custody: visitation, medical care, day care, etc. But because there exist no blanket standards, litigants encounter a crazy quilt of laws that offer little or no consistency from state to state.

Pet custody can be especially contentious when there are no children in the family, because the pets are the kids. And sometimes the parties find it difficult to keep a leash on their emotions and the cases get downright ugly.

In a recent newspaper interview, Minneapolis attorney Cathy Gorlin recalled a wife who got so angry at her estranged husband that she took the couple’s dog—which the husband had kept for breeding—to a veterinarian and had it spayed. There have also been reports of vindictive spouses having pets euthanized out of spite.

And though courts still consider pets as mere property, worth as much as it costs to replace them with a similar model (that’s base model, no options), some pet owners put substantially larger price tags on their beloved animals’ heads.

Last year, Playboy mogul Hugh Hefner was willing to let former fiancée Crystal Harris keep a $47,500 engagement ring and a Bentley automobile in exchange for a puppy to which he’d grown attached.

In June, Harris—the July 2011 covergirl—moved back in, so you could say Hef got back his puppy and his bunny.

But in the real world, regular people have to resolve critter conflicts through the courts. Craig Dershowitz, for example, a New York City art gallery employee, reportedly has spent more than $60,000 to get legal custody of a half-pug, half-beagle mix named Knuckles. His ex-girlfriend has the pooch in California, having claimed he was a gift from Dershowitz.

The custody battle continues, with Dershowitz making TV appearances and creating a webpage to plead his case and solicit donations.

While there’s no denying that our pets occupy important places in our lives, they’re not likely to rise above the legal status of property anytime soon. So for now, put some liver sausage frosting on the birthday cake and let’s have a party.