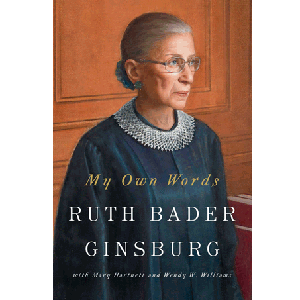 My Own Words by Ruth Bader Ginsburg

Partisan politics and a politicized judiciary provide the backdrop for several new nonfiction books available this fall, including a memoir by one of the Bush administration’s most divisive figures and a collection by a Supreme Court justice who has become a pop culture icon.

Fans of the pioneering jurist now can hear directly from Justice Ruth Bader Ginsburg herself. My Own Words is Ginsburg’s first book since she joined the Supreme Court in 1993. It provides an engaging summary of her thoughts on the issues of our times, starting with a school newspaper editorial on the new U.N. Charter when she was only 13.

Ginsburg collaborated with Mary Hartnett and Wendy W. Williams on the book, a collection of writings, lectures and speeches on topics that range from gender equality to constitutional interpretation to being Jewish.

Appointed by President Bill Clinton, Ginsburg has been a prolific writer and public speaker, and this compilation is a testament to her influence on the law and jurisprudence.


True Faith and Allegiance: A Story of Service and Sacrifice in War and Peace

He was a lightning rod in the Bush administration, with a tenure that was both history-making and mired in controversy. As the first Hispanic-American attorney general of the United States, Alberto R. Gonzales broke new ground. But scandal dogged his term as White House counsel and U.S. attorney general, ending with President George W. Bush requesting his resignation in 2007.

Now Gonzales states his case in a new memoir, True Faith and Allegiance: A Story of Service and Sacrifice in War and Peace, which he says wasn’t written to change minds about his tumultuous years in Washington. He says it was a personal history for his sons, so they know what he was responsible for and why he did what he did.

“Lawyers disagree with some of the decisions and opinions of the Bush administration. I accept that,” Gonzales says. “Did we make mistakes? Yes. That’s what’s going to happen in this kind of job, and I accept that. My hope is that people understand we did the best we could under difficult circumstances.”

Gonzales’ memoir takes a glimpse into his childhood as the son of Mexican migrant workers and the devout upbringing that framed his conservative and religious views. A Harvard Law School graduate, Gonzales worked in private practice before then-Gov. Bush brought him on as general counsel. Bush later named him secretary of state of Texas and appointed him to the Texas Supreme Court before tapping him for the White House counsel post and later attorney general.

Gonzales’ memoir provides a bird’s-eye view of decision-making during one of the most polarizing and terrifying periods of recent American history, from the harrowing moments after 9/11 to the creation of the war on terror.

“The president wanted to avoid war,” Gonzales says. “On the other hand, because of the 9/11 attacks, he was not going to allow the U.N. to dictate to him whether he could use force to protect America. Our job was to ensure the president had legal authority domestically and internationally to use force.”

Gonzales’ memoir might not satisfy those who seek deeper answers to scandals that included the firing of nine U.S. attorneys. Vilified by the press and targeted by congressional Democrats, his tenure ended amid a flurry of Senate hearings, accusations of perjury and partisan confrontation about whether he was competent to run the Department of Justice.

Despite being asked to leave by President Bush as his office became embattled in controversy, Gonzales has nothing but praise for his former employer. “He was a terrific client, deferential to my advice. I always thought he was someone special—that was my perspective.”

The U.S. Supreme Court is becoming an increasingly politicized institution, with justices deviating dangerously from their roles as impartial arbiters—or so argues James D. Zirin in his new book, Supremely Partisan: How Raw Politics Tips the Scales in the United States Supreme Court. Examining the court’s past and present, along with some of its seminal decisions, Zirin lays out the case that a modern, divided Supreme Court is wrongfully making policy choices in a pattern that threatens to undermine public confidence in an independent judiciary.

Zirin’s book is historical and prospective as he dissects the current standoff between Justices Ruth Bader Ginsburg and Sonia Sotomayor on the left, and Samuel A. Alito Jr. and Clarence Thomas on the right, using high-profile recent decisions—from the Affordable Care Act to same-sex marriage—to bolster his points. According to Zirin, the justices are voting along party lines and effectively seek to “legislate from the bench.”

In Supremely Partisan, Zirin explores the “dramatic polarization” of the court in chapters with titles such as “The Black Seat,” “The Jewish Seat,” “The Female Seat” and “The Catholic Seat,” taking aim at what he considers to be personal factors that influence the judges, irrespective of the law or the Constitution. With a vacancy on the court and an upcoming presidential election that could tip the balance at the highest level of justice, Zirin’s book is particularly timely and thought-provoking, whether or not you agree with his premise.

Print and initial online versions of the review of Alberto R. Gonzales’ memoir in “What's on the Shelf,” November, should have referred to the firing of nine U.S. attorneys.


This article originally appeared in the November 2016 issue of the ABA Journal with this headline: “What’s on the Shelf? New releases explore the polarization of politics and the judiciary.”