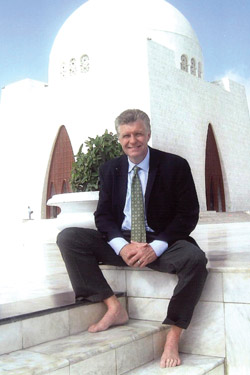 Glenn Hendrix has been in Pakistan training lawyers in ADR. A shoeless Hendrix is pictured here in May outside of Mazar-e-Quaid, the tomb of Pakistan’s founder, Muhammad Ali Jinnah. All visitors to the grounds are required to remove their shoes. Photo courtesy of Glenn Hendrix.

Backlogged courts, litigation-happy parties and risk-averse businesses may sound like the sorts of problems plaguing the U.S. legal system, but it’s also true in Pakistan, where a branch of the World Bank has been trying to convince lawyers that alternative dispute resolution may be a solution.

The International Finance Corp. started promoting ADR in Pakistan in 2005 when it began helping to establish the Karachi Centre for Dispute Resolution. The IFC, which works to encourage economic investment, became involved because of the business climate there. Roughly 90 percent of commercial cases in Pakistan go to trial, and the court backlog is estimated to be near 1.5 million cases, says Atlanta lawyer Glenn Hendrix, a past chair of the ABA’s International Law Section who has been traveling to Karachi to help train Pakistani lawyers in mediation.

“They saw ADR as a means of potentially resolving that backlog,” Hendrix says. “They were looking for an American lawyer who could sell ADR to the Pakistanis. … There is a respect for the American legal system and the ABA.”

Although the Pakistani legal system is officially based on Shariah, as a practical matter court procedures are much more influenced by the legacy of English law, Hendrix says, and allow for ADR.

But much like their U.S. counterparts were when ADR first burst on the scene in America, Pakistani lawyers are similarly leery. “It’s somewhat natural there would be skepticism; we had it here,” says Hendrix. “We have a very good foothold [for mediation in Pakistan]. We shouldn’t overstate the resistance. They’ve made a lot of progress.”

Since 2007 the Karachi Centre for Dispute Resolution has resolved 1,053 disputes through mediation out of a total of 1,522 cases referred to it, involving $23.4 million in claims as valued based on the payouts following settlement, according to data from May. And the pace of referrals is accelerating, Hendrix says, noting there were only 71 referrals to the KCDR in 2007.

Still, lawyers are a potent political force in the country and many tend to see mediation as an “exotic” procedure that will cause them to lose revenue, he says. “It’s about effectively selling to lawyers what their role is in ADR. ‘What will I be doing?’ And ‘Can I do it?’

“Once you explain it, it seems less exotic, to where they feel less threatened.”

Caption last updated Sept. 27 to include more information about the photo.