Do you have the skills, traits and values of a good lawyer? Take this quiz to find out 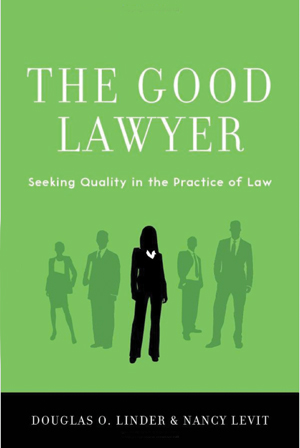 What makes a good lawyer? University of Missouri at Kansas City law professors Nancy Levit and Doug Linder sought to answer that question as a follow-up to their book The Happy Lawyer. They've found a mix of interesting skills, personality traits and values in their latest book, The Good Lawyer: Seeking Quality in the Practice of Law, published this summer.

Think you are a good lawyer? Take Linder and Levit's quiz and find out how much you really know.
You can click here to take it interactively, or read the questions and answers below.

1. When it comes to assessing the emotional state of a client or absorbing what a client says in an interview, are male lawyers or female lawyers likely to perform better?

(a) Male and female lawyers are likely to perform equally well at both tasks.

(b) Male lawyers are likely to perform better at both tasks.

(c) Female lawyers are likely to perform better at both tasks.


2. When a lawyer represents a client whose welfare he or she cares about deeply, what becomes more likely?

(a) The lawyer is more likely to cheat or violate rules of ethics.

(b) The lawyer is more likely to tell the client's story in a compelling way.


3. What emotional state is most likely to prompt courageous moral actions (doing the right, but difficult, thing)?

(b) Emotions such as anger, disgust, guilt and shame.

(c) Both answers above are about equally correlated with a willingness to take moral action.


4. What character strength, when demonstrated at an early age, is most predictive of success decades later in school and in careers?


5. What famous lawyer said: "As a peacemaker, the lawyer has a superior opportunity of being a good person. There will be business enough."


6. In a survey of clients of legal services, what did clients say they wanted most from their lawyers?

(b) Reasonable fees for services. (c) A proven track record of success.

(d) A feeling that their lawyers cared about them and their cases.


7. When a Gallup poll asked 1,000 Americans to rank various professions by their "honesty and ethical standards," what percentage of respondents thought lawyers' honesty and ethics ranked either "high" or "very high"?


8. According to a recent study, what reduction in cheating might be expected if billing sheets included the statement: "All the billing time indicated is a true and honest reflection of actual hours billed" and had a signature line?


9. In an article published in 1936, Clarence Darrow suggested defense lawyers should try to exclude potential jurors if they were:

(a) Germans, Scandinavians, Presbyterians and Baptists.

(b) English, Irish, Catholics and Jews.


10. According to a study by two professors at the University of California at Berkeley, high first-year law school grades and LSAT scores are negatively correlated with which lawyer competencies?

(a) Networking, business development and service to the community.

(b) Empathy, integrity and honesty.

This article originally appeared in the November 2014 issue of the ABA Journal with this headline: "Building a Better Lawyer: New book explores the skills, traits and values you'll find in one."

1. (c) Female lawyers are better at both assessing the emotional states of other people and listening. In general, women score higher on tests of empathy than do men, more quickly identify emotional states from clues, and interrupt conversations less frequently. Brain imaging shows that when women are shown partial emotional clues, their brains light up in defined places, whereas the same clues set off a crazed flurry of activity in male brains.

2. (c) When a lawyer cares deeply about a client’s welfare, the lawyer is likely to take the time to fully understand the client’s concerns and will be able to tell the client’s story in a more powerful way. Unfortunately, recent studies show that when we are working to help someone we really care about, we are also more likely to cheat. This seems to be because it is easier to do so and still maintain a positive self-image than if we are cheating for other reasons. Good lawyers need to be aware of this tendency to bend rules for clients we care about and guard against it.

3. (b) Studies show that empathy only leads to pro-social action when that action comes at little personal cost. Courageous moral action is far more likely to be prompted by strong emotions such as anger, disgust, guilt and shame—especially if the person having those emotions has a strong life-structuring code. Moral courage enables good lawyers to do the right thing, even when that comes with risks.

4. (d) In a famous study in which 4-year-olds were given the choice of eating one marshmallow immediately or, if they could wait 15 minutes without eating the marshmallow, have two, those children who resisted temptation for the larger postponed reward had better grades throughout school and had more successful careers. The takeaway is that willpower is one of the most central characteristics to success in a legal career or in life.

5. (a) Abe also urged lawyers to “discourage litigation” and to “persuade your neighbors to compromise whenever you can.”

6. (d) Clients say they most want to be treated with respect, receive regular communication from their lawyers, have a relationship based on trust, and feel they are being shown empathy and compassion. Most clients also say lawyers today are “less caring and compassionate” than they once were.

7. (b) In comparison, 84 percent of the respondents thought nurses had high or very high levels of honesty. Judges were thought honest by 47 percent of the public. As poorly as the public thought of lawyers, we still did better than advertisers, car salespeople, lobbyists and (of course) members of Congress.

8. (d) When we sign our names, hold up our hands and take oaths or pledge our sacred honor, we are not just going through meaningless gestures; we are making it significantly less likely that we will cheat.

9. (a) Darrow, who contended that jurors based their decisions more on moral intuitions than logical reasoning, was especially fond of Irish jurors. He wrote that a defense lawyer who “got rid of” a potential juror who was Irish “would be guilty of malpractice.” Good lawyers are advised to ignore Darrow’s stereotyping. While what he said might have had some truth in 1936, it has little today. It remains true, however, that the moral intuitions of jurors strongly affect their decision-making and good lawyers know how to appeal to them.

10. (a) Marjorie Shultz and Sheldon Zedeck found only eight of 26 core lawyer competencies to be tied to law school grades and LSAT scores. Some competencies, such as networking, business development and service to the community, were actually negatively correlated with high grades and test scores.

By Nancy Levit and Douglas O. Linder, authors of The Good Lawyer: Seeking Quality in the Practice of Law.