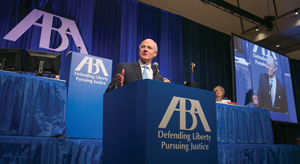 Opposition to a tax proposal in Congress that the ABA warns would impose new financial burdens on many law firms by fundamentally changing the manner in which they must pay their taxes appears to be picking up steam.

The proposed legislation would require all law firms and other personal service businesses with annual gross receipts of more than $10 million to use the accrual method of accounting rather than the traditional cash receipts and disbursement method. As a result, many firms would be forced to pay taxes on income long before they actually receive it. Law firms and other personal service businesses favor the cash method of accounting—where income is not recognized until payment has been received—because it is simple and generally reflects the way they operate their businesses.

Although the proposed changes are contained in draft bills developed by the House Ways and Means Committee and the Senate Finance Committee that are intended to simplify the tax laws, they will have the opposite effect, said ABA President William C. Hubbard on July 10 in a statement (PDF) submitted to a subcommittee of the House Committee on Small Business. Hubbard, a partner at Nelson Mullins Riley & Scarborough in Columbia, South Carolina, began his one-year term as ABA president at the close of the association's 2014 annual meeting in August.

"If the tax rules are changed to disconnect cash collections from how income is taxed, the very business model upon which many law firms and other personal service businesses operate will be turned on its head," Hubbard said in his statement to the Subcommittee on Economic Growth, Tax and Capital Access. He warned that firms would have to borrow money or use their scarce capital just to pay their accelerated tax obligations.

"This particular issue has become one of the most important issues to our members—and many state and local bars throughout the country—because of the serious negative effects that the proposed legislation would have on practicing lawyers, their law firms and their clients," Hubbard said. He emphasized that the proposal would cause the legal profession to suffer even greater financial hardships than other professions because many lawyers and law firms are not paid by their clients until long after the work is performed, and sometimes they are never paid.

In addition, Hubbard said, the proposal would constitute a major tax increase on small and medium-size businesses, and discourage economic growth. Hubbard cited estimates by the congressional Joint Committee on Taxation that the accrual accounting mandate in the House bill would generate $23.6 billion in new taxes over 10 years "by requiring the affected businesses to pay taxes on phantom income up to a year or more before it is actually received (if it is ever received)."

During the ABA Day in Washington lobbying event in April, more than 350 bar leaders from across the country participated in hundreds of meetings on the issue with their senators and representatives. In addition, more than 25 state, local and specialty bar associations have joined the ABA in opposing the accrual accounting method proposal, and the ABA has been working closely with the American Institute of CPAs and a coalition of more than 50 law firms and other groups representing members who would be adversely affected by the proposed change in the law.

As a result of the coalition's efforts, 46 senators sent a "Dear colleague" letter to the Senate Finance Committee's leaders in August, and a similar letter was sent by 233 representatives to the House leadership of both parties in September, urging them to preserve the cash method of accounting for personal services businesses, farmers and ranchers, and certain other businesses irrespective of annual gross receipts. That number represents a majority of the House membership.

This article originally appeared in the November 2014 issue of the ABA Journal with this headline: "Building Momentum: Opponents of requiring law firms to adopt accrual method of accounting appear to be gaining support."

Next:
Chicago teens tell how guns affected them and their neighborhoods