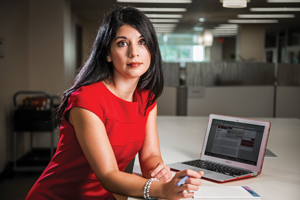 Mary Anne Franks: “On its face, the statute criminalized an extremely broad range of conduct.” Photo by Sonya Revell.

The White House held a conference about it in 2011. Legislators have referred to it as the scourge of the Internet. It allegedly has caused teen suicides. Many school districts have policies aimed at it, and some state laws specifically address it. It is cyberbullying, a form of online harassment in which a person uses social media or other technological means to cause severe emotional distress to another.

While most laud the attempt to combat cyberbullying, some legal experts question whether some of the legislative efforts are drawn narrowly enough so as not to violate First Amendment free speech rights.

In July, New York state's highest court, the New York Court of Appeals, issued one of the first opinions that may have set the line of how far a statute may go. In a 5-2 vote, the court struck down Albany County's cyberbullying law as too broad and vague in the case People v. Marquan M.

The court took issue with the county's legislation, adopted in 2010, which defined the crime of cyberbullying as any act of communicating or causing a communication to be sent by mechanical or electronic means, including posting statements on the Internet or through a computer or email network; disseminating embarrassing or sexually explicit photographs; disseminating private, personal, false or sexual information; or sending hate mail, with no legitimate private, personal or public purpose and with the intent to harass, annoy, threaten, abuse, taunt, intimidate, torment, humiliate or otherwise inflict significant emotional harm on another person.

The New York court recognized that bullying "has been exacerbated by technological innovations and the widespread dissemination of electronic information using social media sites." However, the court noted that its plain language showed the statute to be of "alarming breadth."

"It is undisputed that the Albany County statute was motivated by the laudable public purpose of shielding children from cyberbullying," Judge Victoria A. Graffeo wrote in her majority opinion. "The text of the cyberbullying law, however, does not adequately reflect an intent to restrict its reach to the three discrete types of electronic bullying of a sexual nature designed to cause emotional harm to children."

The county had argued that the court should construe the law to apply to only three types of electronic communications intended to inflict harm on a child: sexually explicit photographs; private or personal sexual information; and false sexual information with no legitimate public, personal or private purpose. However, the court said that "the law covers communications aimed at adults, and fictitious or corporate entities, even though the county legislature justified passage of the provision based on the detrimental effects that cyberbullying has on school-aged children."

Free speech experts agreed with the majority's decision. "The ruling of the New York Court of Appeals was correct and unsurprising because the First Amendment has a reach which is fairly broad and fairly well-defined," says Des Moines, Iowa, attorney James C. Hanks, author of the book School Bullying: How Long Is the Arm of the Law?, published by the ABA. "Very little consideration was given to First Amendment issues related to freedom of expression in the drafting of this legislation."

"The statute in this case was indeed constitutionally overbroad and vague," says University of Miami law professor Mary Anne Franks, who has written about cyberlaw and gender. "On its face, the statute criminalized an extremely broad range of conduct—really, any act of communication—done with intent to 'annoy, threaten, abuse, taunt, intimidate, torment, humiliate or otherwise inflict significant emotional harm on another person,' using a definition of 'person' that included not only adults, as opposed to minors, but also corporations, firms, or partnerships and 'other entities.'

"This would seemingly include communications such as writing scathing Yelp reviews of restaurants, calling for boycotts of unethical businesses, or sending an angry email to a cheating ex-spouse," she adds.

One month after the law became effective in November 2010, a 15-year-old student at Cohoes High School in Albany used Facebook to create the webpage "Cohoes Flames." The anonymous site featured pictures of classmates with descriptions of their sexual practices and preferences.

Police determined the webpage was produced by Marquan M., who faced charges in June 2011 under the cyberbullying law. He filed a motion to dismiss in the trial court, which was denied. He then pleaded guilty to violating the cyberbullying law but reserved the right to challenge the law's constitutionality on appeal. After a county court affirmed his conviction and held the law constitutional, he appealed to the state's highest court.

Judge Robert S. Smith, joined by Judge Eugene Pigott, dissented, writing that the majority "makes too much of what it sees as flaws in the draftsmanship of the cyberbullying law." Despite those arguments, however, the court said it would decline to rewrite the statute, citing concerns over separation of powers.

"Cyberbullying is a serious concern that all communities must confront, but there are better and more constructive ways to address the problem than giving children criminal records," said Marquan M.'s attorney, Corey Stoughton, in a statement. She is a senior attorney with the New York Civil Liberties Union. "Communities across New York and the nation should take note that criminalizing First Amendment activity is unlawful and does nothing to address the causes of bullying or prevent it from taking place."

"The Court of Appeals did provide direction to legislators on how to craft a more narrowly tailored criminal law that would apply to three types of sexual material disseminated online," Hanks says. "There are other cyberbullying laws that are drafted with greater precision. Some cyberbullying laws are criminal laws and some are noncriminal laws that apply in the school setting. Even greater precision is required for criminal statutes."

"The good news for municipalities and states concerned with cyberbullying is the court's clear recognition of a compelling interest in protecting minors from harassment via online social media," says University of Florida professor and free speech expert Clay Calvert. "The bad is that those entities now need to go back to their legislative drawing boards to better and more narrowly craft their efforts to curb it."

"Bullying isn't a well-defined term," says UCLA law professor Eugene Volokh. "Most, maybe all, states have bans on 'harassment,' but a lot of them are focused on unprotected speech categories, such as threats or fighting words."

The concept of cyberbullying itself is "so amorphous that legislative efforts to address it are likely to be long on good intentions and short on precision," Franks says. "I am not convinced that we are well-served as a society by creating a new and ambiguous legal category of 'bullying' when we have existing categories such as harassment, stalking, violations of privacy and assault at our disposal."

Albany County Executive Dan McCoy indicates there will be no appeal of the decision. "We are going to use the roadmap provided by the judicial department and, with the county legislature and county attorney, draft a new cyberbullying law," he says. "This is about protecting children, and we do not want to take away anyone's First Amendment rights."

The U.S. Supreme Court has agreed to hear a case about threats posted on Facebook. In Elonis v. United States, the court is asked to decide whether—consistent with the First Amendment and Virginia v. Black, a 2002 case about cross burning—the conviction of threatening another person requires proof of the defendant's subjective intent, or whether it is enough to show that a reasonable person would regard the statement as threatening.

"I don't envy lawmakers," Calvert says. "They are being charged with an exceedingly difficult task of trying to better weigh First Amendment concerns against those of protecting minors from real harm."