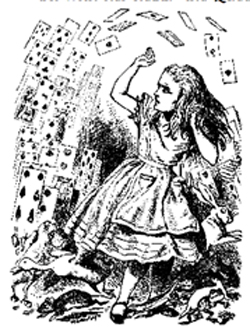 Rochelle Dreyfuss: “People in the U.S. will figure out some way to get protection for software-related inventions, but it will be different and more narrow protection than what they have been getting.” Alice’s Adventures in Wonderland illustrated by John Tenniel.

Few U.S. Supreme Court rulings have been embraced so enthusiastically. As soon as the court handed down its decision in Alice Corp. v. CLS Bank last June, lower courts and the U.S. Patent and Trademark Office began displaying a new, marked hostility toward software and business-method patents. They are now striking down these patents in record numbers and denying applications that would previously have been granted. It is basically open season on these patents.

“After Alice came down, some feared that almost all software-related patents would be held invalid. It looks like that is happening. Since the decision, district courts have uniformly knocked down those patents. But what may be more interesting is that business-method patents are going down in droves,” says Rochelle C. Dreyfuss, a law professor at New York University and co-director of the Engelberg Center on Innovation Law & Policy.

In Alice, the justices toughened the rules for deciding which inventions are eligible to be patented. The court unanimously declared that in order to be deemed patent-eligible subject matter, an invention must pass a two-step inquiry: First, does the invention consist in significant part of a patent-ineligible concept—for example, a law of nature, natural phenomenon or abstract idea? If so, the invention is patent-eligible only if the remaining parts of the invention have an “inventive concept”—one or more elements that ensure a patent on the invention amounts in practice “to significantly more than a patent upon the ineligible concept itself.”

The invention at issue in Alice was a computerized method to perform electronic escrow for online transactions. The court found the patent on this invention claimed the abstract idea of escrow, which was patent-ineligible. The remainder of the invention, performing the escrow on a general purpose computer, was not sufficient to provide an inventive concept.

“A mere instruction to implemen[t]” an abstract idea “on … a computer … cannot impart patent eligibility,” the court stated. Finding that the invention consisted of patent-ineligible subject matter, the court struck down the patents on the invention.

Soon after Alice was decided, the PTO issued new guidelines for its examiners. “The patent office has changed its practice and is applying great scrutiny to what are arguably business methods and inventions related to software,” says Heath W. Hoglund, vice president and chief patent counsel of Dolby Labs in San Francisco. He also chairs the Patents Division of the ABA Section of Intellectual Property Law.

Thanks to the patent office’s tougher scrutiny, the agency is granting far fewer patents on business methods and software-related inventions. The agency “is rejecting everything it can. Some applications are even being pulled after allowance, which is unheard of in my experience,” says Robert R. Sachs, a partner in Fenwick & West’s San Francisco office.

The agency’s Patent Trial and Appeal Board also has adopted a tough new stance. The board has been striking down droves of business-method patents under the Transitional Program for Covered Business Method Patents, according to Dreyfuss. This temporary program allows alleged infringers to challenge the validity of financial-method patents in administrative proceedings before the PTAB.

“Potential applicants in some technical areas should think really hard about whether they want to spend money filing for patents. Any patent applications for software, e-commerce, business methods—it seems as if those would be increasingly hard to get through the patent office,” says Ryan M. Corbett, an attorney in the Tampa, Florida, office of Burr & Forman. He co-chairs the Section 101 Subcommittee for the Patent Litigation Committee of the ABA’s Intellectual Property Law Section.

Attorneys prosecuting patents will likely try clever claim language to get around the patent office’s tough new standard for patent eligibility. The Supreme Court warned against this, stating in Alice that determining whether something is patent-eligible subject matter should not “depend simply on the draftsman’s art.” So patent attorneys might have only limited success. “People in the U.S. will figure out some way to get protection for software-related inventions, but it will be different and more narrow protection than what they have been getting,” Dreyfuss says.

The courts, too, have turned against business-method and software-related patents. In almost every case since Alice in which a party asserted that such patents consisted of ineligible subject matter, the courts have concurred and struck down the patent. In just four months, the district courts and the U.S. Court of Appeals for the Federal Circuit have thrown out 14 such patents. That is equal to the total number of all patents struck down in 2013 for ineligible subject matter.

Moreover, in the wake of Alice, courts are ruling on patent eligibility earlier in the litigation process. Instead of waiting until summary judgment to strike down patents for ineligible subject matter, a number of courts have issued such rulings on motions to dismiss.

Being able to assert invalidity so early in patent litigation tilts the playing field in favor of accused infringers. “It is a huge, powerful tool for defendants,” says Hoglund. “It gives them the potential to end a case before the large costs of discovery and Markman hearings,” during which a judge examines evidence and rules on the meaning of the words in the relevant patents’ claims.

All this is bad news for nonpracticing entities, aka “patent trolls.” They often seek to monetize software or business-method patents; and after Alice, many of these patents could well be struck down. “That gives them a lot less leverage to try to get settlements from defendants,” Corbett says.

One of the trolls’ main sources of power is the discrepancy between litigation and settlement costs. When a patent troll warns a company that it must purchase a license or be sued for infringement, both sides know that the cost of buying a license is far less than the millions of dollars in legal fees typically required to fight the infringement allegations in court. So even a noninfringing company has a strong incentive to purchase a license.

Being able to resolve the lawsuit quickly, on a motion to dismiss, dramatically changes this calculation. Now alleged infringers have a greater incentive to fight in court. Conversely, patent trolls now face the prospect of more court battles, higher spending on legal fees, and a good chance that their software or business-method patents will be struck down. They will need to think long and hard about which patents to assert and against whom. “It may even lead to fewer of these lawsuits being filed,” says Corbett.

That seems to be occurring, according to an October report by Unified Patents, a consultancy that opposes patent trolls. The company found that patent trolls filed 35 percent fewer patent infringement suits in the third quarter of 2014, compared with the second quarter. Operating companies also filed fewer patent infringement suits, but the drop was significantly less, at 19 percent.

Some experts fear that the post-Alice crackdown will deprive inventions of needed protection, resulting in harm to innovation and the economy. Others, however, are more sanguine. “If it cuts down on nonpracticing entities asserting patents of questionable validity, I think that is overall a good thing,” Corbett says. “It may not be good for patent litigators, but it focuses efforts more on patents that protect things, rather than patents that just protect old ideas now being used on a computer. Those [latter] patents are not fostering innovation, which is kind of the point of patents.”

This article originally appeared in the February 2015 issue of the ABA Journal with this headline: “After Alice: Business-method and software patents may go through the looking glass.”