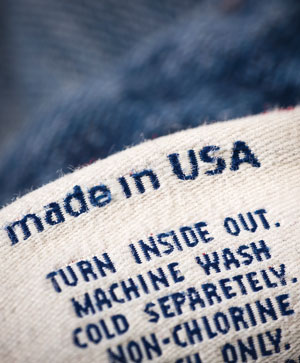 Nowadays, it seems that everything from cars to jeans proudly bears the "Made in the USA" label. But what exactly does that label mean?

In every state but California and under federal law, products don't actually have to be fully made in the United States to bear the label. As long as "all or virtually all" of the finished product is made domestically, it is considered to be made in the USA.

California has been the lone holdout, requiring every part of a product to be manufactured in the U.S. to earn the label.

As a result, a glut of consumer class actions have been filed in the state, exploiting the different definitions. The San Diego-based Del Mar Law Group, which did not return requests for comment, filed many of these suits, accusing jeans manufacturers, balloon helium-tank manufacturers and basketball-rim makers of misleading or false advertising, according to the firm’s website.

In response, California enacted Senate Bill 633, which largely brings the state’s labeling law in line with the federal standard.

California lawmakers determined that the state’s old standard imposed an unrealistic burden on companies, particularly in the increasingly global economy. Even products with significantly high domestic content still fell short of the requirement because some parts simply couldn’t be sourced domestically.

In a letter supporting alignment of the California and federal standards, the California Manufacturers & Technology Association argued that a “virtually all”-type standard meets a reasonable consumer’s understanding of the label. But the Consumer Federation of California opposed the bill, stating in a letter that it puts “those businesses who go the extra mile to keep jobs and manufacturing in the USA” at a disadvantage and would “gut a truth-in-advertising law,” replacing it with a vague standard that invites misinformation.

“Every client I have wants to know they’re doing it right,” says Los Angeles lawyer Lee Brenner of Kelley Drye, who is not part of any of the class action suits. “When they hire American instead of foreign employees, pay higher state taxes, subject themselves to our labor and workers’ compensation laws, they take great pride in using the ‘Made in the USA’ label. So it’s devastating when they’re sued. This new law is much clearer and anytime you have more clarity, you’ll have less litigation.”

Though SB 633 is more in line with the federal standard, it doesn’t exactly match it. It’s unclear how the California law will coexist with the “all or virtually all” federal standard. Plus, Brenner adds, it’s unclear whether pending lawsuits can be dismissed based on the recent passage of the new law, which takes effect this month.

This article originally appeared in the January 2016 issue of the ABA Journal with this headline: “Global Outlook: California finally steps in line with the rest of the country when it comes to labeling.”