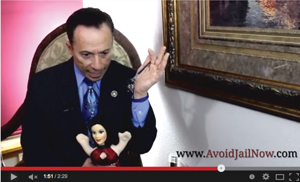 Last year, Northern California attorney Michael Fiumara wanted to drive traffic to his firm's website, so he followed some traditional marketing advice and filmed a series of informational YouTube videos to boost his search engine optimization.

After several hours making what Fiumara describes as "stodgy" videos, he and his team got a little slaphappy. What happened next was anything but traditional for law firm marketing. Fiumara pulled out a speaking sex doll he says he received as a gag gift and interviewed her as if she were a client. With the doll on his lap spewing a number of raunchy recorded messages, Fiumara feigned surprise at his "client's" inappropriate comments and told her that he needed to end the conversation because the rules of professional conduct prohibit sexual relations between client and counselor.

It was that last video, of course, that got the firm more than just improved SEO. At press time the ad had more than 29,000 views on YouTube and coverage in national media, including Comedy Central's @Midnight series. His other videos—about 40 total—typically have about 300 views.

Fiumara's approach isn't cookie-cutter, nor is his background: He once worked as a professional body builder and has a degree in city planning. He claims to have once won over a new client by doing a headstand at a Super Bowl party.

Fiumara has had clients over the years who behaved inappropriately. So while he describes the ad as a parody, he says it is based in real-world experiences.

The video has drawn criticism from viewers—peers and nonattorneys alike—who say the ad is unprofessional. But it doesn't appear to violate conduct regulations, legal ethics experts say. Fiumara says there also has been positive feedback from current and prospective clients alike.

"One client said, 'People without a sense of humor scare me' "—a sentiment Fiumara shares. A prospective client saw it as evidence that Fiumara would use the media as needed and retained the firm.

A sequel is in the works.

This article originally appeared in the April 2015 issue of the ABA Journal with this headline: "There's No Such Thing as Bad Publicity: California lawyer's unusual YouTube video leads to awe, ire and clicks."