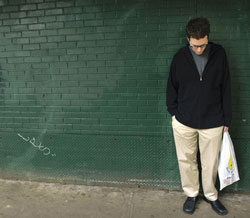 The California Supreme Court is soon to decide the bounds of moral rehabilitation as it hears the case of 39-year-old Stephen Glass and his quest to be admitted to the State Bar of California.

In California, Glass appealed the Committee of Bar Examiners’ decision to the independent State Bar Court, winning favor twice, most recently last summer. But, proving it really doesn’t want him among its ranks, the bar appealed its case to the California Supreme Court late last fall and the court agreed to hear the case. At press time oral arguments had not been scheduled, but they were expected to be heard sometime this year.

Glass, who now works as a paralegal in Los Angeles, traces his moral transgressions to the childhood trauma he suffered at the hands of his inordinately strict father and mother, a doctor and a nurse, according to court documents.

Specifically, Glass claims he made up sensational magazine stories to impress his parents, who’d insisted he become a physician rather than a writer. While striving to gain bar admission, Glass earned nearly $200,000 for The Fabulist, a novel he wrote about—you guessed it—a hotshot reporter who is fired for making up stories.

“I side with the bar—and that’s saying something for me,” says Carol Langford, a lawyer and lecturer in ethics at the University of California at Berkeley’s Boalt Hall who has represented former pimps and meth addicts seeking bar admission in California. “What he did was bad—there’s no doubt. But it’s what the candidate does before the bar that is notable: How do they handle their past mistakes? Are they really showing remorse?”

In Glass’ case, Langford says, “he’s a pathological liar and I don’t see where he’s been treated for that. It would be very different if he’d been honest about his past.” In particular, Glass initially gave only a partial list of articles he fabricated. “If you’re going to list 23, why not put in the whole shebang?” Langford says, noting that it was only two years ago that Glass finally came completely clean about the breadth of his lies.

Although Langford is sympathetic about Glass’ traumatic childhood, she says, “The question is: Who are you now?” She is unimpressed by the 22 people—including psychiatrists and law professors—who have testified on Glass’ behalf. “It’s not hard to get people to say he’s great.”

Perhaps most disturbing, in Langford’s view, is that Glass profited from his book, a fictionalized version of his professional downfall. In pocketing the proceeds, he missed an opportunity to demonstrate his moral character by paying his victims—“and there are victims when you lie about them,” she notes—or the magazines, which suffered considerable professional embarrassment by having to print retractions. “He could have even donated some of his proceeds to a freedom-of-journalism organization,” she says. Through his attorney, Glass declined to comment for this story.

California’s high court could go either way on the case, Langford says, but the justices usually give deference to the state bar, at least in matters of discipline. And because Glass has become a cause célèbre, the public is going to be watching him—and the court knows that. “I could see him being in a bind and lying to a client—and the California bar can see it. If I had been his lawyer, he would have come before the bar a whipped dog.”