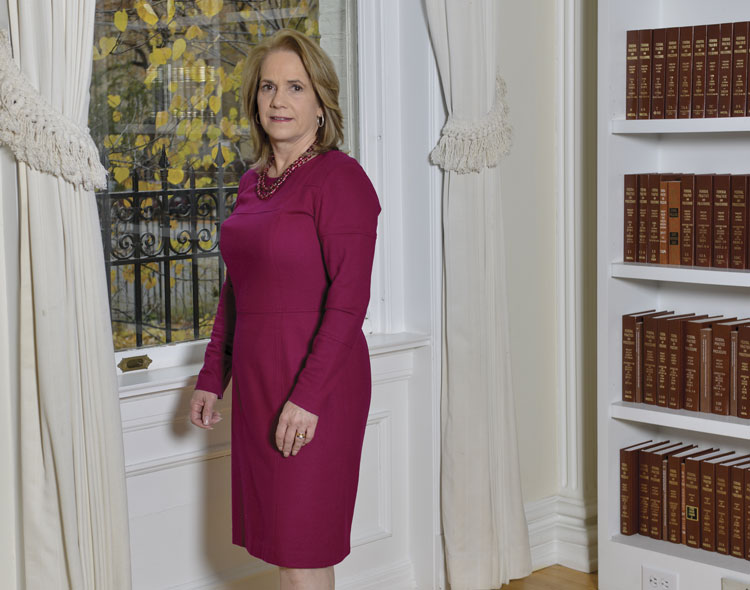 Pamela Robillard Mackey: “Universities were very much trying to comply with the Dear Colleague letter and also honor the women who were claiming to be sexually assaulted.” Photo by McCory James.

Pamela Robillard Mackey, a lawyer in Denver, chaired the American College of Trial Lawyers task force that issued the report. She says the letter essentially forced many colleges to take the paradigm they had developed for policing honor code violations, whether for plagiarism or making too much noise in the dorms, and apply it to sex assault—“something far more serious, with lifelong consequences for both the accused and accuser.”

“They weren’t particularly well-equipped to do it,” Mackey adds.

“Universities were very much trying to comply with the Dear Colleague letter and also honor the women who were claiming to be sexually assaulted,” Mackey says. But, in the course of trying to do so, schools “weren’t as mindful to what was happening to the accused.”

In May 2016, a group of 21 prominent law professors issued an open letter criticizing the administration’s directives to schools. “Unfortunately, OCR’s relentless pressure on institutions to respond aggressively to sexual assault allegations has undermined the neutrality of many campus investigators and adjudicators by forcing them to consider the broader financial impact of their actions,” the law professors wrote.

The professors added that some schools question accused students before informing them of their alleged violations, and that many school officials deny students access to witnesses or evidence that could clear them. The upshot, according to the academics, is that innocent students are deprived of a college education and relegated “to a lifetime of diminished income and social stigmatization as sexual offenders.”

“It’s awful to be victimized, but also awful to be wrongly accused and have to live with suspension or termination for the rest of your life,” says Harvard Law School professor Elizabeth Bartholet, one of the signatories.

She points out that Harvard Law requires the higher standard of clear and convincing evidence in other disciplinary situations, including cases where students allegedly committed crimes like nonsexual assault.

“The clear and convincing standard seems appropriate with a sanction as serious as being thrown out of college on the basis of a sexual assault charge, which can clearly be a career-ending incident,” she says.

Some individual states are pushing back against a perception that colleges aren’t treating accused students fairly. In 2013, North Carolina became the first state in the country to pass a law specifying that students at public colleges are entitled to hire lawyers to represent them at campus judiciary proceedings.

A few observers question whether colleges should be adjudicating criminal matters at all. Others counter that universities have always had the ability to enforce codes of conduct as they see fit, and that they regularly adjudicate violations such as plagiarism and cheating.

But advocates for victims, like Laura Dunn, founder of the D.C. nonprofit SurvJustice, note that schools are entitled to enforce their honor codes—which impose different requirements than the criminal justice system and carry different consequences.

“They have no obligation to keep anyone on campus,” says Dunn, a member of the ABA’s Commission on Domestic & Sexual Violence.

She also notes that some students who have been thrown out of one school following sexual misconduct allegations have gone on to enter other schools.

Durham, North Carolina, attorney Kerry Sutton, who represented the captain on the Duke lacrosse team—exonerated of sexual assault in 2007—counters that school adjudications can have dramatic, life-altering consequences.

“It crushes the kids. It crushes the families. The parents are in tears on the phone because the arc of their son’s future has changed,” says Sutton, who now represents accused students full time.

She adds that many of these cases involve people who know each other, and that virtually all involve heavy drinking. People who are drunk may not be capable of consenting to sex—though whether that’s the case often depends on matters including how incapacitated they are.

Often, subsequent interactions further confuse the issue. For example, accused students and their alleged victims sometimes trade text messages or communicate on social media after an incident. Those exchanges can shed new light on the allegations—but the digital media trail can also be subject to interpretation.

Stetson University’s Lake points out that some predators have “gotten better at covering their tracks” by attempting to immediately create evidence that would clear them of wrongdoing. For instance, he says, some will “immediately descend on a victim with text messages and Snapchats to create a digital record that makes it look like a misunderstanding.”

In rejecting the Obama-era guidance, DeVos specifically noted the concerns about the preponderance-of-the-evidence standard raised by the American College of Trial Lawyers. She also cited a June proposal by a task force of the American Bar Association’s Criminal Justice Section, which does not reflect official ABA policy and has been rejected by other sections and divisions within the association.

The CJS recommendations call for a panel of at least three people—separate from whoever investigated the allegations—to decide whether any policies were violated. The recommendations say an accused student should be found responsible only if the panel unanimously agrees.

“We understood that the system was regarded as being so broken that it was highly likely the new administration was going to come in and take some steps in this area,” says Andrew Boutros, a Seyfarth Shaw partner who chaired the ABA’s task force. “Our recommendation was that schools should move away from the single investigatory model, where the investigator is also the decision-maker.”

The task force also recommended that students not question each other directly but have the opportunity to submit questions to a decision-maker, who would then decide whether to ask them.

“The task force’s recommendations provide less opportunity for confrontation than is provided by the Sixth Amendment; however, they do provide for the opportunity for both parties to ask questions through the hearing chair,” the report states. “In addition, they do not allow either side to present their personal statement about what occurred unless they are willing to be questioned by both the school and indirectly by the other party.”

In its report, the CJS task force notes that the recommendations “have not been endorsed by any other section of the ABA.” And in fact, for the past two years, the ABA Commission on Domestic & Sexual Violence has been quietly working on a U.S. Department of Justice-funded grant to develop standards for handling campus sexual assault cases.

“It’s a problem that this task force report is being widely viewed, reported and used as ABA policy when it is not,” says Mark Schickman, who is of counsel at Freeland, Cooper & Foreman in San Francisco and chairs the commission. “It is a single section task force report, which is being broadly misused.”

Schickman says that despite the controversy over the DOE’s new guidelines, the commission is not weighing in with recommendations until its research is complete; a report will be released next year. The findings will be used to train judges, prosecutors and mental health providers, in addition to suggesting best practices for dealing with “the whole process,” he says. One of the primary concerns: ensuring that sex assaults are not treated as strictly a criminal justice issue.

“To require a heightened burden of proof before you can impose remedial and restorative actions is not appropriate,” Schickman says, likening campus sexual assault to actions an employer might take in a workplace with similar allegations. “For the past several years, the 2011 and 2014 guidelines were recognized as appropriate guidance in the field, and this [task force] report is being used to undercut that.”