Technological advances have provided attorneys with new ways to contact prospective clients and increase their client base. One such avenue is through text messages, or short message services. Recently, a North Carolina ethics opinion explained that attorneys can advertise through a text message service that provides subscribers a choice of whether to initiate live telephone conversations.

The hypothetical in the opinion involves a lawyer handling workers’ compensation cases who buys advertising with ABC Texting. The lawyer’s ads are sent via text messages to ABC Texting subscribers with the following: “Injured at work? We can help.”

Ethics Opinion 1, issued in April, provides that such a text message ad is permissible, as long as it complies with other ethical rules on advertising and applicable federal and state law. Rule 7.2(a) of the North Carolina Rules of Professional Conduct, which mirrors Rule 7.2(a) of the ABA Model Rules of Professional Conduct, allows lawyers to advertise services through written, recorded or electronic communications—provided that they comply with Rule 7.1 and Rule 7.3.

For example, North Carolina Rule 7.1 prohibits lawyers from engaging in false and misleading advertising, as does the ABA Model Rule.

Furthermore, Rule 7.3 prohibits lawyers from directly soliciting prospective clients via advertising unless they are family members or close friends, former clients or other lawyers. However, the North Carolina ethics opinion reasons that texting through a service that gives subscribers the option to receive the messages is not a solicitation.

“Text message advertising as described herein is akin to billboard or banner advertisement directed to the general public,” the opinion reads. Therefore, the lawyer may advertise through ABC Texting.

“Based on the subscriber-based nature of the ABC Texting SMS, I agree with the conclusion that these texts are directed at the general public,” says Ellen Murphy, a professor at the Wake Forest University School of Law who specializes in professional responsibility issues.

First Amendment expert Rodney A. Smolla, dean of the Widener University Delaware Law School, concurs. “Given that the participation by subscribers is entirely voluntary, I believe it is appropriate to treat this form of advertising as mass media advertising and not as a targeted solicitation,” Smolla says.

The opinion also addresses whether the texting company could engage in the following exchange:

ABC Texting: Have you or someone you know been injured at work? If so, type yes.

ABC Texting: Lawyer can help. May we contact you at this number? If so, type yes.

ABC Texting: Thank you. A representative will contact you soon.

In this scenario, if the subscriber answers yes to both questions, the texting company provides the subscriber’s cellphone number to the lawyer, who then can contact the client directly.

“The result would be different if texts were targeted to specific persons,” says ethics expert Peter A. Joy, a professor at the Washington University School of Law in St. Louis. “Then those texts would be like sending direct mail advertising or email.”

The reason is a concern regarding possible abuse and coercion. Comment 2 to ABA Rule 7.3 warns that such a “situation is fraught with the possibility of undue influence, intimidation and overreaching.” However, in the above scenario, the subscriber registered with the texting company and expects to receive various advertisements. Furthermore, as the opinion reads, “the subscriber is given the opportunity to accept or decline” the lawyer’s offer to contact the subscriber.

The ABA’s Standing Committee on Ethics and Professional Responsibility is considering amendments to the ABA Model Rules on lawyer advertising, according to committee chair Barbara S. Gillers. She says the proposals concern Rules 7.1 through 7.5 and are likely to include provisions pertaining to texting. The project was discussed during the Leadership Conference of the ABA Center for Professional Responsibility, held in Chicago in October. Gillers says the committee plans to release a working draft of its proposals this month, followed by public hearings at the ABA Midyear Meeting in February. 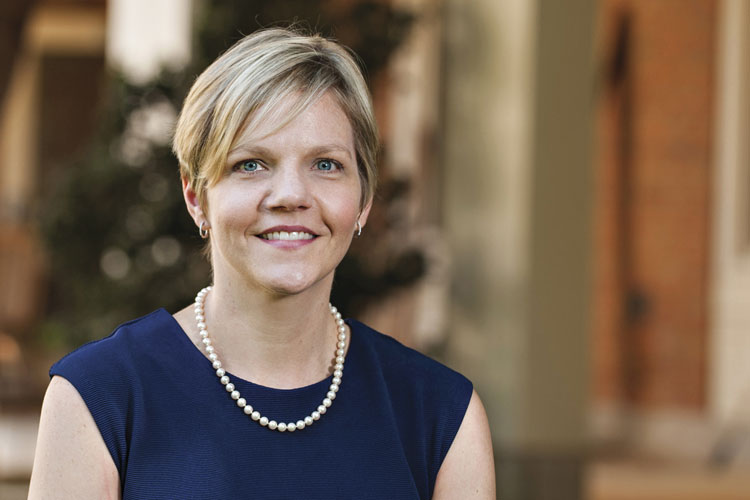 Ellen Murphy: “These texts are directed at the general public.” Photo courtesy of Wake Forest University School of Law.

Other states have addressed the propriety of lawyers using text messaging to advertise. In 2013, an Ohio ethics opinion reasoned that text message advertising is generally permissible under Rule 7.2(a). “Because text messaging may be considered both an ‘electronic communication’ and a ‘written communication’ under the Rules of Professional Conduct, a plain reading ... indicates that lawyers may use text messages to advertise their services,” according to the opinion.

Opinion 2013-2 (PDF) then explains that a directed text message is not a real-time electronic communication that would constitute an impermissible solicitation. Rather, the opinion determines that the text message “is more akin to an email than a chat room communication.”

“Text messaging is still a degree more direct than email. But unlike email, text is restricted, at least practically, to shorter communications,” says Keith Swisher, a legal ethics professor at the University of Arizona. “Text messaging approaches, but does not cross, the line between permissible legal advertising and generally prohibited real-time solicitations. Put simply, while text messaging is fast and direct, it is not as fast and direct as in-person or telephonic solicitation.”

In 2015, the Florida Bar Standing Committee on Advertising decided that texting potential clients was a forbidden form of solicitation similar to telephone solicitation. However, later that year, the Florida Bar board of governors overruled that decision and stated that lawyers could send such messages to prospective clients, as long as they complied with the advertising rules for written and email communications.

“These [rules in Florida] are onerous, requiring the text to include attorney qualifications, disclosures about how the lawyer obtained the contact information, and a statement that the individual should delete the message if they have counsel already,” says Murphy of Wake Forest.

Smolla, who has represented lawyers charged with violating advertising rules, says the key question involving texts is whether “to treat a text message as a targeted written communication or as a real-time electronic communication.” He says that because texts “can easily be ignored—and given that the interaction is not typically understood as in real time, such as a phone call or a live electronic chat—many bar authorities, and indeed First Amendment principles, should allow such lawyer-initiated texts.”

However, Swisher of the University of Arizona says lawyers should give recipients an opportunity to opt out of receiving such messages. “Because text messaging is such a direct, arguably invasive and almost real-time communication, it is preferable where possible to give the recipient the ability to consider the communication and then take the next steps, if any,” Swisher says.

Joy from Washington University adds that “the ABA issued opinions on lawyer websites in 2010, email communications with one’s client in 2011, and instances where lawyers should take special security precautions to protect against unauthorized access to client communications sent via email in 2017.

“When it comes to new technology, responsible lawyers should use common sense and, when in doubt, ask their state bar ethics authorities for advisory ethics opinions,” Joy says.

This article was published in the December 2017 issue of the ABA Journal with the title "Can Lawyers Text Potential Clients? When it comes to advertising, states are saying yes—at least so far."