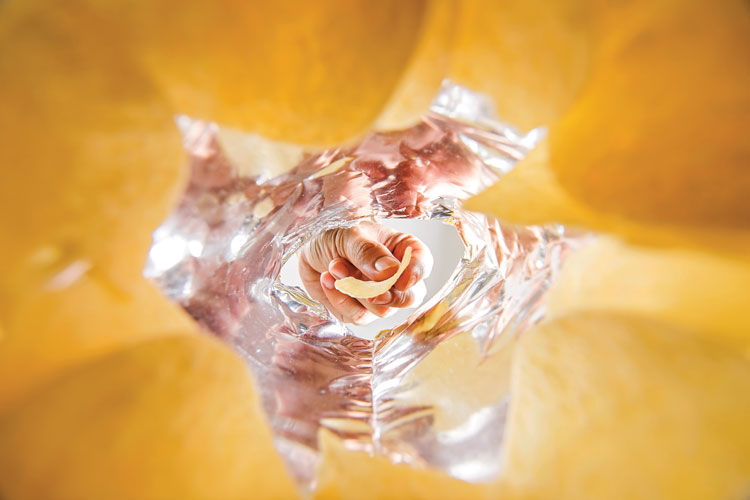 “Slack fill” isn’t a phrase you often hear in everyday speech. Most people don’t even know what it means, even though they have experienced it. According to the U.S. government’s definition, “slack fill is the difference between the actual capacity of a container and the volume of product contained therein.” In other words, it’s that empty space you were disappointed to find inside a box of candy you bought at a movie theater—when the box turned out to be only half full. And it’s the air inside a bag of potato chips—all of that space above and around the chips.

“This is one of those issues that gets consumers riled up. They feel cheated,” says Edgar Dworsky, a former Massachusetts assistant attorney general who’s now a consumer advocate in Boston running the Consumer World website.

But does feeling cheated justify suing? Some people clearly think so. According to a 2017 report by the U.S. Chamber Institute for Legal Reform, plaintiffs lawyers filed at least 29 lawsuits in 2015 alleging that companies cheat shoppers with deceptively large packages—followed by another 37 slack-fill cases in 2016. Those tallies are mostly federal cases, without counting potentially dozens of state lawsuits.

“I think it’s only grown since we wrote that report,” says Cary Silverman, a partner at Shook, Hardy & Bacon in Washington, D.C., who co-authored the U.S. Chamber report with James Muehlberger, a partner in his firm’s Kansas City, Missouri, office. “They’re nuisance lawsuits,” Silverman says. “They are extremely easy to bring. Go over to the supermarket and shake a box. And if it rattles, that’s a lawsuit. ... It makes a mockery of the civil justice system.”

But Ryan J. Clarkson, managing attorney at the Clarkson Law Firm in Los Angeles, says he has a higher purpose in mind when he represents plaintiffs against candy companies. “Slack-fill litigation is important to make sure manufacturers are using packaging that is not false, deceptive or misleading,” he says. “It’s all about corporate accountability.”

Maia Kats, director of litigation for the Washington, D.C.-based Center for Science in the Public Interest, says many slack-fill cases have merit. “Clearly, if you are a chip manufacturer and you blow up the chip bag three or four times, you are doing so for a reason—that is, to give the impression to consumers that they are receiving more product than they are actually receiving,” says Kats, whose group has not filed any slack-fill lawsuits. “The motivation is to encourage purchases at a higher price point, and that’s classic consumer deception.”

As an example of such deception, Clarkson points to Jujyfruits. In a federal lawsuit in San Francisco, Clarkson won preliminary approval on June 26 for a $2.5 million settlement with Ferrara Candy. Clarkson’s client, Thomas Iglesias, sued after spending $4 on a box of Jujyfruits at a movie theater concession stand in San Francisco and discovered that the box was roughly half full. Illinois-based Ferrara has agreed to pay up to $7.50 each to shoppers who purchased boxes or bags of Jujyfruits, Lemonhead, Jaw Busters and other candies in the past five years. And Ferrara says its packages will have less empty space in the future: Boxes will be 75 percent full of candy, while bags packaged within boxes will be 50 percent full. “We think it’s an excellent result for consumers,” Clarkson says.

Slack-fill lawsuits, which often seek class action status, hinge on the U.S. Food and Drug Administration’s definition of “nonfunctional slack fill.” FDA rules recognize several reasons why it’s permissible for companies to leave some empty space in packages. For example, food may settle inside a box during shipping. Or some air may be necessary to protect the food.

As Dworsky explains, “The potato chip manufacturers will tell you: ‘We blow up the bag to create this cushion, so when all the bags are packed in a carton, you have this cushion to help protect the chips from breaking.’ My sense is that’s a legitimate reason.” When shoppers file lawsuits complaining about empty space in packages, it’s up to the courts to determine whether there’s a legitimate explanation for that slack fill.

“We’ve been able to prevail in some cases where we pointed out the weight on the packaging,” says Kenneth K. Lee, a partner at Jenner & Block in Los Angeles. “But other courts have said: ‘That’s not enough. It’s too hard to tell for some consumers to figure out exactly how much is in there.’ ”

This article was published in the September 2018 ABA Journal magazine with the title "Fill ’er Up!: Candy and snack companies sued for packages with empty space instead of extra product."