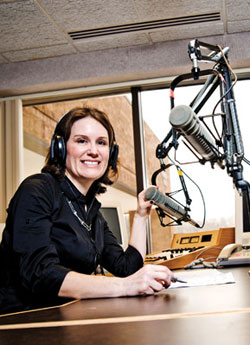 Cleveland-based criminal defense attorney Elizabeth Kelley is passionate about the rights of the accused. Lately she’s been taking her passion to the airwaves, engaging radio listeners in hot-button criminal issues by way of the legal difficulties besetting Hollywood “it” girl Lindsay Lohan, former Illinois Gov. Rod Blagojevich and other high-profile personalities.

Her show, Celebrity Court Radio, airs locally every Sunday at 2 p.m. on Cleveland’s NewsTalk 1420 AM WHK. During the hourlong show, Kelley focuses on top celebrity legal stories of the past week, shifting from her personal observations to live chats with guests that include well-known criminal defense lawyers, journalists and other legal experts.

“It may very well be that people are attracted to the show because they’re interested in Mel Gibson or Lindsay Lohan,” says Kelley, 46, who preceded her foray into radio with appearances on CNN, TruTV, Fox and other national news outlets. “We use the lives of celebrities, the problems of celebrities to illustrate various aspects of the criminal justice system.”

WHK program director Joe Sweeny says he initially had some reservations about a show dedicated to legal issues, but he was soon won over by his listeners’ appetite for a new spin on the lives of the rich and famous.

A show in January illustrated typical content. It covered topics including the preliminary hearing of Dr. Conrad Murray, the physician charged with involuntary man slaughter in the death of Michael Jackson, and a judge’s dismissal of the conviction of Howard K. Stern, the lawyer convicted of contributing to the death of well-known model Anna Nicole Smith. Beth Karas, a correspondent for TruTV, and Curtis Sliwa, radio host and founder of the Guardian Angels, were among the guests.

Kelley’s zeal for criminal law stems from her solo practice, in which she defends the rights of mentally challenged individuals as well as notable Innocence Project beneficiaries like Anthony Michael Green, who was exonerated in 2001 after spending 13 years in jail for a rape and aggravated robbery conviction.

Shifting to the journalist’s side of the microphone presented some initial challenges for Kelley, but she decided to cultivate her radio personality without professional coaching.

She also enlisted the services of publicist Mark Goldman, a former radio and TV producer, to produce her show and line up guests.

Goldman readily admits that hosting a show about celebrities from Cleveland could never have happened before the age of social media, and the advent of online Web streaming. But the two say the show’s popularity has encouraged them to try to syndicate it.

If that happens, Kelley, who still spends the bulk of her time working as a criminal defense attorney, is prepared for her own celebrity spotlight.

“I’d love for the show to eventually evolve into a TV format,” she says. “I never intended it to boost my practice or to generate clients. What I wanted to do was to be a voice for criminal defense lawyers and to give the listening audience that perspective.”

Let your voice be heard! Send your solo story ideas to .(JavaScript must be enabled to view this email address).