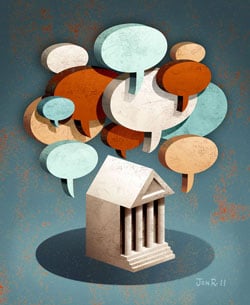 When history books look back at the last U.S. Supreme Court term, they may well focus on the first 45 words of the Bill of Rights. The First Amendment often took center stage, as the justices examined disputes involving funeral protests, violent video games, employee petitions, restrictions on pharmaceutical marketing and campaign finance reform.

“It was a fascinating term with the almost aggressive, pervasive and nearly unanimous protection of fairly basic First Amendment principles,” says Robert M. O’Neil, founder of the Thomas Jefferson Center for the Protection of Free Expression in Charlottesville, Va.

“It is clearly one of the more notable terms, especially given the number of free expression victories and the kinds of cases in which they were handed down,” agrees University of Washington law professor Ronald K.L. Collins, who specializes in First Amendment law.

The term clearly showed many conservative justices embracing fundamental free speech principles in several cases—most prominently Snyder v. Phelps, in which the First Amendment protected from tort liability those who protest near the funeral of a military service member; and Brown v. Entertainment Merchants Association, where California’s ban on the sale or rental of violent video games to minors was ruled unconstitutional.

In both cases, says University of Colorado law professor Helen Norton, “the majority this term took a libertarian view not inconsistent with what one might have expected from the Warren court,” which generally expanded free speech rights.

“To protect speakers’ autonomy interests and the unfettered exchange of expression, the First Amendment should be interpreted to protect even extremely offensive and hurtful speech,” adds Norton, who specializes in First Amendment issues.

In Snyder, for example, Chief Justice John G. Roberts Jr. wrote his majority opinion in language that could become First Amendment lore: “Speech is powerful. It can stir people to action, move them to tears of both joy and sorrow, and—as it did here—inflict great pain. On the facts before us, we cannot react to that pain by punishing the speaker. As a nation we have chosen a different course—to protect even hurtful speech on public issues to ensure that we do not stifle public debate.”

O’Neil describes Roberts as a “surprisingly consistent if not unfailingly committed advocate of First Amendment principles.”

In Brown, Justice Antonin Scalia’s majority opinion rejected the idea of violence as obscenity, writing that “our cases have been clear that the obscenity exception to the First Amendment does not cover whatever a legislature finds shocking, but only depictions of ‘sexual conduct.’ ”

Scalia also noted the prevalence of violent themes in a broad range of expressive material accessible to children, including Grimm’s fairy tales, Greek mythology and William Golding’s classic book Lord of the Flies.

The court in those cases followed its decision in the 2009 term in United States v. Stevens—that a federal statute that criminalizes depictions of animal cruelty in videotapes and other commercial media is unconstitutional—in rejecting attempts by the government to carve out new areas of unprotected speech.

“Snyder is important for at least two reasons,” says Collins. “First, it gives added staying power to what the court said in Stevens; and, second, it reaffirms the court’s willingness to categorically protect even the most offensive kinds of expression, including those that have little or no political or social worth.”

The court also upheld First Amendment challenges in commercial speech and campaign finance, where the Roberts court has been skeptical of laws restricting expression.

“It is also another term in which we see the libertarian side of the court vindicating corporate free speech claims,” Collins says.

Justice Anthony M. Kennedy wrote for the six-member majority, finding the law discriminated on content and viewpoint: “The state may not burden the speech of others in order to tilt public debate in a preferred direction.”

Preventing government “tilting” also underlay the court’s five-member conservative majority in the consolidated cases of Arizona Free Enterprise Club’s Freedom Club PAC v. Bennett and McComish v. Bennett, which struck down an Arizona law that sought to advance public financing of candidates. A matching funds provision of the Arizona Citizens Clean Elections Act stipulated that when a privately financed candidate spends a certain amount of money, the state will provide money to the publicly financed candidate.

“ ‘Leveling the playing field’ can sound like a good thing,” Roberts wrote in his 5-4 majority opinion. “But in a democracy, campaigning for office is not a game. It is a critically important form of speech.”

Reading her dissent from the bench, Justice Elena Kagan did not see the law as infringing upon the speech of privately financed candidates. “What the law does—all the law does—is fund more speech,” she said. “The system discriminated against no ideas and prevented no speech.”

O’Neil characterizes the Arizona decision as another trek “along an inevitably rocky path,” noting the deep divide on the court in campaign finance cases. He says that “some were expecting some concession or accommodation to the level-playing-field concept, but the majority’s result is not surprising.”

First Amendment claimants certainly didn’t prevail in all cases. In Borough of Duryea v. Guarnieri, the court ruled that public employees who allege that their employers violated their rights to freedom of petition under the First Amendment must show that their petitions address matters of public, not merely private, concern. Public employees who allege free speech claims long have had to meet this public threshold. Kennedy, in his majority opinion, wrote that public employees cannot “evade the rule [for speech claims] … by wrapping their speech in the mantle of the petition clause.”

“Rather than engaging in any examination of whether the plaintiff’s petitions actually undermined effective governmental operations in any way,” Norton says, “the majority simply applied a bright-line rule to deny protection altogether to public employees’ petitions that involve private grievances.”

The high court also rejected a First Amendment challenge to a Nevada recusal rule in Nevada Commission on Ethics v. Carrigan. A city councilman challenged part of a rule that broadly prohibited legislators from voting on matters in which a person with whom they had a “commitment or relationship” would create an appearance of impropriety.

Scalia, relying on history and tradition, noted that recusal rules were adopted in the early days of the U.S. House and Senate. “The Nevada Supreme Court and Carrigan have not cited a single decision invalidating a generally applicable conflict-of-interest recusal rule—and such rules have been commonplace for over 200 years,” he wrote.

Scalia further reasoned that voting by a legislator expresses the will of the people rather than individual preferences of the legislator. “The court viewed this case as one about voting, not speech,” O’Neil says.

The justices don’t appear to be leaving the free speech arena anytime soon. The court already has agreed to examine cases involving the relationship between copyright and the First Amendment, the ministerial exception (under which religious-based employers can discriminate with impunity) and the Federal Communication Commission’s policy against indecent broadcast speech.