Changing Times: Fee Agreements May Be Modified, But Only for Good Reasons 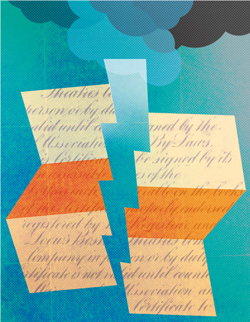 Abraham Lincoln, who enjoyed a notable legal career in Illinois before his election to the presidency in 1860, was not above thinking about practical matters like fees.

“The matter of fees is important, far beyond the mere question of bread and butter involved. Properly attended to, fuller justice is done to both lawyer and client,” wrote Lincoln in his famous Notes for a Law Lecture. An exorbitant fee “should never be claimed,” he said. The observation that “a lawyer’s time and advice are his stock-in-trade” also has been attributed to Lincoln.

His points are well-taken. Fee agreements allow lawyers to be paid a reasonable amount for their services, while clients have some measure of predictability over what they will pay for those services.

But what happens when the fee agreed on originally is no longer appropriate to the changing circumstances of the case? Is the attorney obligated to follow the original agreement, or may it be modified even though the representation already has begun?

For much of the 20th century, Canon 12 (Fixing the Amount of the Fee) of the ABA Canons of Professional Ethics urged lawyers to neither undervalue nor overestimate their fees. The notion that it might be unethical to undercharge a client disappeared when the Model Code of Professional Responsibility replaced the Canons in 1969. The Model Rules of Professional Conduct, which went into effect in 1983, now apply a “reasonableness standard” to fees. (The Model Rules are the direct basis for lawyer conduct codes in every state except California.)

But the only specific reference in the Model Rules to changing fee arrangements comes in Model Rule 1.5(b): “Any changes in the basis or rate of the fee or expenses shall also be communicated to the client.”

That provision was enough for the ABA Standing Committee on Ethics and Professional Responsibility to conclude in a recent opinion that “changes in fee arrangements during representations clearly are contemplated by the Model Rules.” But, the committee emphasizes in ABA Formal Ethics Opinion 10-003 (released in July), “this single reference does not mean that lawyers are free to change existing fee arrangements simply by giving notice to clients.”

That result, says the opinion, is in accord with “the cardinal principle that governs all lawyer fee agreements,” as set forth in Model Rule 1.5(a): “A lawyer shall not make an agreement for, charge, or collect an unreasonable fee or an unreasonable amount for expenses.”

Other provisions of the Model Rules also are relevant to modifications of existing fee agreements.

The lawyer’s obligation to communicate with the client about proposed fee agreements is reinforced by Model Rule 1.4 (Communication). The opinion notes that in most cases, the client’s response will be clear, but there are times when the client’s acceptance of a fee modification “may be inferred from the circumstances.”

Changes in fee arrangements that involve a lawyer acquiring an interest in the client’s business, real estate or other nonmonetary property ordinarily will require compliance with Model Rule 1.8(a), which governs business transactions with clients.

What if the lawyer obtains a spectacular result for the client? Wouldn’t a little “something extra” perhaps be called for? No, states the opinion: “A lawyer who has regularly represented a client on an hourly basis at an agreed rate may not unilaterally impose a success fee or premium rate, even after an advantageous result for the client.” Nor may a lawyer change from an hourly fee to a contingent fee, or vice versa, solely to increase his or her compensation.

That doesn’t sound like something Lincoln would pull on a client—and if he wouldn’t, neither should you.

In the August edition, the ethics article “Changing Times,” page 26, refers readers to ABA Formal Ethics Opinion 10-003, one that has not yet been officially approved by the Standing Committee on Ethics and Professional Responsibility. A link to the opinion cannot be made available until the committee has completed the voting process. A link will be provided as soon as possible. The ABA Journal regrets any confusion caused by the delay in posting the link.