Child actor parlays his connections into an entertainment law practice 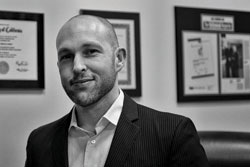 As a kid, Jeff Cohen was always a ham.

That personality trait helped launch his television acting career as a child and then propelled him to his most famous role: Chunk in the movie The Goonies.

Then puberty hit and forced Cohen into early retirement. No one willingly gives up being an actor, he says. “It’s too fun. They feed you. You get to pretend all day. But I had to figure it out.”

Helping him figure it all out was legendary film director Richard Donner, who directed Cohen in The Goonies. Donner introduced Cohen to the business side of Hollywood, and Cohen parlayed that introduction into summer jobs at movie studios during college.

“I grew up loving the Three Stooges and the Marx Brothers, but suddenly I had a new crop of heroes,” like David Geffen and Jeffrey Katzenberg. Cohen discovered that many of the most respected agents, studio executives, producers and managers had law degrees, and he followed suit.

After graduating from UCLA’s law school in 2000, Cohen worked at an entertainment law firm before starting his own firm in Beverly Hills. Cohen Gardner, his six-lawyer office, represents actors, media companies, directors, writers, producers and production companies. “My concerns about my clients are not merely academic,” he explains. “I’ve been in front of the camera. I know how hard everyone works. I treat them carefully, with respect.”

Being an entertainment attorney is ideal because “I get to go to the parties but I don’t have to audition,” jokes Cohen, who also writes about business, legal and political matters for the Huffington Post and CNBC, a side gig that he calls “my creative outlet post-acting days.”

Because he works in show business, Cohen says he’s never the most famous person in the room. Still, people get a kick out of his child stardom. “Having Chunk as your attorney? That’s pretty cool.”

This article originally appeared in the February 2014 issue of the ABA Journal with this headline: “Chunk, Esq.: Child actor parlays his connections into the law business.”