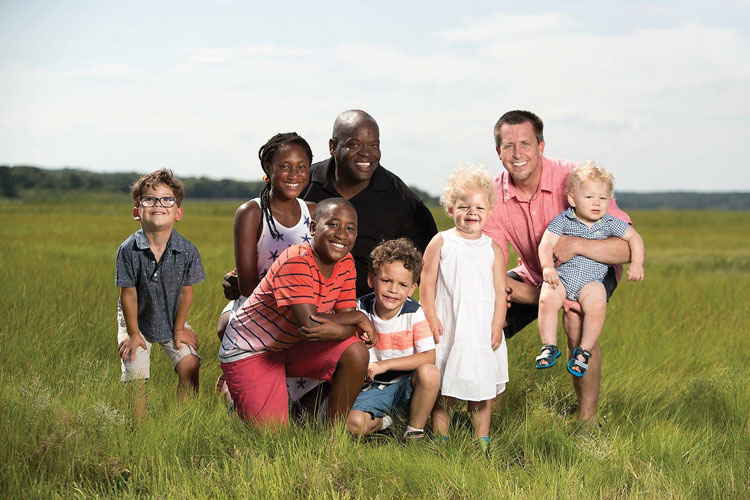 Richard (right) and Aaron Hooks Wayman with their children. Photo by Pedro Blanco.

Richard Hooks Wayman has always had a lot of faith in the legal profession. Although there were no lawyers in his family, he was certain from the time he was a boy that he wanted to become an attorney.

“I knew it was a profession that could help people resolve conflict and mitigate harm,” he says.

After graduating from the University of Iowa College of Law in 1992, Hooks Wayman began his career by tackling child poverty and youth homelessness for the Legal Aid Society of Minneapolis. In his early days on the job, a seasoned colleague invited him out for a walk.

“We walked for three hours, and I saw homeless youth sleeping on the streets,” he recalls. “They had been jettisoned from abusive and neglectful families.”

Seeing teens exposed to sexual exploitation, gang activity and drugs shocked Hooks Wayman. It was a far cry from his upbringing in rural Iowa.

His agency’s resources to assist homeless teens were equally shocking. “The best we could do for them was buy mosquito netting or a sleeping bag and point them to the safest park to sleep in,” he says.

Resources may have been inadequate, but passion in the youth services community was strong, as was Hooks Wayman’s commitment to the cause. After eight years as a litigator, he moved to nonprofit management, where he felt he could make a difference for young people on a broader scale. He has worked for organizations dedicated to ending youth homelessness in Minnesota, Massachusetts and Washington, D.C. Also, Hooks Wayman wrote the Minnesota Runaway and Homeless Youth Act and lobbied with others for five years to get the policy enacted.

He is now the national executive director of the Children’s Defense Fund, a privately financed nonprofit that promotes medical care, education, housing, nutrition and safety for children—particularly the 13 million who live in poverty.

“There’s no reason we have child poverty, except that we have a maladjustment in income and wealth and a lack of political will to change that,” he says.

When the Minnesota statute he wrote finally passed in 2006, it encompassed a spectrum of social services, including education, health and housing. Hooks Wayman says thousands of young people are now receiving services under the program.

He is confident that everyone agrees the basic needs of children must be met. The sticking point is how to achieve it. “I believe in my heart that child advocacy is a nonpartisan issue,” he says. “We need to focus on moving forward because that will get us through the political wrangling.”

A collective voice has the biggest impact, Hooks Wayman says, adding that the American Bar Association’s voice on Capitol Hill is greatly respected. In 2011, he joined the ABA and became involved with its Commission on Homelessness and Poverty.

“I was very impressed with the commitment of the ABA to address the inequalities of society and to effect positive change,” he says. 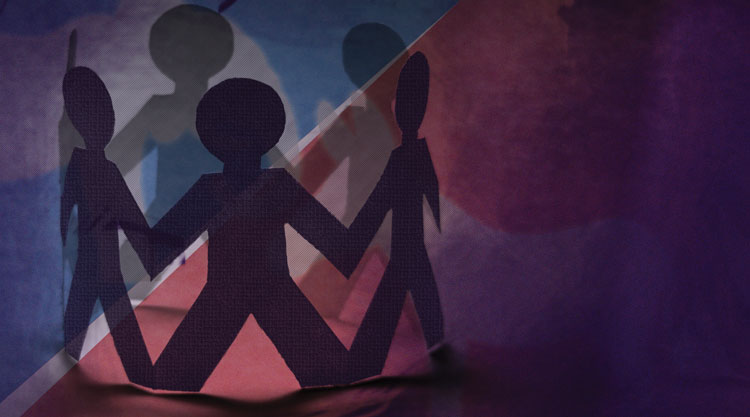 Hooks Wayman’s efforts to help at-risk children extend from his work life to his home life. He applied to become a foster parent early in his career and was raising two teenage daughters plus two dogs when he met the man who is now his husband, Aaron Hooks Wayman.

When their foster daughters grew up and left home, the Hooks Waymans became foster parents of 2-year-old twins. They adopted the twins after the birth parents’ rights were severed.

The Hooks Waymans continued to serve as foster parents, offering a home to a 13-month-old girl and her 13-week-old brother, both of whom they later adopted.

During the process, they learned there were two older siblings: 4-year-old and 3-year-old boys. All four children were adopted and welcomed into the family.

“We bring the rainbow wherever we go,” Hooks Wayman says of his family, now living in Kensington, Maryland. “We’re loud and hilarious. It’s been a huge blessing.” He wishes more people would consider becoming foster parents, particularly of teens.

“Foster youth get a bad rap,” he says. “And teenage foster youth get a worse one. But real human change results from relationships. No one changes in isolation. Youth yearn for a trustworthy, caring and consistent adult in their life.”

He’s quick to point to other ways lawyers can help children:

Attorneys looking to be more involved can also find information through the ABA Homeless Youth Legal Network, which the association launched in June.

Hooks Wayman is a big believer in living with purpose and gusto. He says people need activities that allow self-expression and help to bring them joy. They also thrive on the ability to make a positive change.

It will take a community, Hooks Wayman says, not only to resolve conflict in the lives of foster children but also to mitigate harm in all walks of life.

“I don’t need everyone to be a foster parent or a child advocate,” he says. “Find your passion issue, whether it be the environment, senior citizens or pets. Make a difference in the area that means something to you.”

This article was published in the January 2018 issue of the ABA Journal with the title "Fostering Change: Advocating for at-risk children is this member's mission."