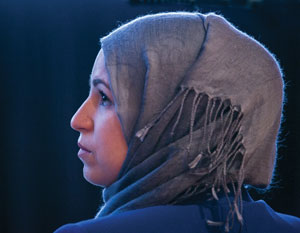 Roula Allouch: “There are so many rights that women have in this faith.” Photo by Kathy Anderson.

Not yet a decade out of law school and already gaining a name as a passionate lawyer, volunteer and activist, Roula Allouch has had her feet firmly planted in two different worlds her whole life. A self-described "Kentucky girl" with five siblings, Allouch graduated from the University of Kentucky and its law school, where she continues to root for her beloved Wildcats. At the same time, each morning before leaving home for her job with a Cincinnati law firm, she puts on the hijab—or headscarf—that she has worn since college, a visible sign of her commitment to her Islamic faith.

While Allouch’s civil litigation practice in Ohio and Kentucky is always busy, it is far from her only vocation. Serving as a representative of the Young Lawyers Division of the Kentucky Bar Association in the ABA House of Delegates, Allouch has become an increasingly familiar face in bar leadership. She chairs the Tellers Committee of the House. She is also a co-coordinator of the YLD’s 2014-15 public service project, Project Street Youth, which explores the legal issues affecting homeless and transitional youths and provides a toolkit for young lawyers helping them. Recently she has been appointed to the council of the ABA Rule of Law Initiative for the Middle East and North Africa. The initiative partners with nongovernmental organizations and other groups to help build democratic structures in countries throughout that region. 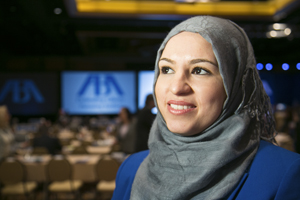 Looking closely at her diverse life as an American-born Muslim female lawyer, common themes of justice, equality, dignity and dialogue emerge in all of Allouch’s pursuits, including one she calls “truly the most rewarding volunteer work I have ever participated in.” Earlier this year she was named national board chair of the Washington, D.C.-based Council on American-Islamic Relations, one of the leading Muslim civil rights and advocacy organizations in the United States. CAIR is committed to empowering American Muslims, advocating for their rights and enhancing the understanding of Islam in this country.

That mission has become particularly critical—and difficult—in recent months due to brutal actions, in the name of Islam, of terrorist groups, most notably the one calling itself the Islamic State, which is also known as ISIS. Allouch believes that the group’s actions, which are “not only un-Islamic but anti-Islamic,” have increased the biases against and often the outright hatred of Muslims more than at any other time that she can remember since the Sept. 11 terrorist attacks. For its part, CAIR composed an open letter signed by more than 120 international Islamic scholars and Muslim leaders that refutes ISIS’s ideology and offers a point-by-point analysis of any claimed religious justification for its actions.

Relations between Muslims and the wider community also have grown more tense since the February murders of three young Arab-American Muslims in Chapel Hill, North Carolina. Craig Stephen Hicks, a neighbor alleged to have been involved in a long-running dispute with the three victims over parking, has been charged in their killings, which many say should be classified as hate crimes.

The killings jolted Allouch, who acknowledges widening tensions and an increasingly virulent anti-Muslim environment among what she terms “Islamophobic” groups and individuals in the United States. Particularly troubling to her was the realization that the victims—ages 19, 21 and 23—“were the accurate representation of American Muslims. It’s like I knew them, I see my siblings in them; we see ourselves in them,” she says. The murders made her even more resolved to wear the hijab. “It’s a representation of my personal faith,” she says. “It’s my right.”

Allouch believes the legal community has a role to play in ensuring that crimes based on a victim’s race, religion or other protected right are prevented, as well as prosecuted to the fullest extent of the law when they occur. On Feb. 13, CAIR joined with some 150 other organizations in signing a letter urging U.S. Attorney General Eric Holder to open a federal hate crime investigation into the North Carolina murders.

Focusing on other projects that help clear up misconceptions and stereotypes concerning Muslims, CAIR provides programs in diversity training for law enforcement officials and civil rights and leadership initiatives for students. “And a chunk of our work is legal,” she points out, with CAIR devoting resources to ensuring that accommodations are in place for employees’ prayer time and helping Muslims who have been put on no-fly lists for no apparent reason.

Soon it also will submit an amicus brief on behalf of the plaintiff in a case recently accepted by the U.S. Supreme Court, which will decide whether retailer Abercrombie & Fitch was discriminatory when it refused to hire a Muslim woman wearing a hijab.

Incidents of potential discrimination involving Muslim women wearing headscarves have arisen around the country, she notes, citing some employees at state motor vehicle offices who have told women that they must remove their hijab because their face must be fully visible in identification pictures. In her own life, a bailiff once asked Allouch to remove her headscarf in the courtroom, but she says after she explained to him what it was and why she was wearing it, he apologized and she was allowed to keep it on. 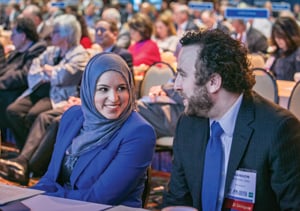 The only Muslim in her law school class, Allouch says she made the decision to start wearing a hijab because she likes to be identified as a Muslim woman who is practicing her faith on a day-to-day basis.

Does a Muslim woman who is also practicing law, volunteering and advocating every day contradict the tenets of that religion? Identifying herself as a feminist, Allouch rejects that notion, saying “there are so many rights that women have in this faith.” She felt no obstacles in her way to becoming a lawyer from the moment the seed was planted during a college economics course (she graduated summa cum laude with a bachelor of business administration in economics) and germinated when a career assessment test indicated law as the best match. Her decision to become a lawyer was solidified, though, after 9/11 and the backlash against Muslims that followed, something that made her see clearly that lawyers were needed “to advocate for the rights of our community members.”

For the most part, Allouch believes she has “been very fortunate that in my career and in my practice I have not come across much discrimination,” noting that most slights have been made by those who assumed she didn’t belong in the courtroom.

But one time, in a much more harrowing episode, she got on an elevator at the local courthouse with a man who, when the door closed, started berating her for being Muslim. She says she remembers “the look of hate he had in his eyes as he said how violent and hateful my religion was, and he was spewing hate at me. After the fact I realized how scary it was,” she says. “It reminded me that there are a lot of people who have a lot of hate.”

Ten or 20 years from now, when she still will be a relatively young lawyer, Allouch hopes also to still be very involved in her practice, bar leadership and service to the community at large and the Muslim community. What she hopes for even more, though, is a change in the venomous anti-Islamic attitude she saw in that man and sees in this country every day.

With the challenges that accompany the daily practice of law, Allouch realizes that she “is very, very fortunate to be able to work and volunteer on a daily basis” with her law firm, the ABA, CAIR and the community. At times, the career she has forged can seem almost surreal to her, she says, noting that “it’s certainly been a unique experience.”

This article originally appeared in the May 2015 issue of the ABA Journal with this headline: “Mission: Understanding: Cincinnati lawyer works to ensure equal rights, treatment for American Muslims.”